A queue in front of The National Commercial Bank in Hay Alandulus, Tripoli. Photo: Sara Khalil for The Turban Times

In Libya, getting paid in cash is a luxury

Ever since the political civil war in 2014, Libya has been facing a worsening currency and liquidity crisis. The value of the Libyan Dinar has decreased dramatically in the past 3 years. The value of the Libyan Dinar has been driven from 1,4 to 9 dinars per U.S. Dollar. The liquidity in Libyan Banks is now ever-limited without a glimpse of light at the end of the tunnel.

Naturally, this crisis has been fully covered by Libyan and international media from a macro political and financial point of view, so this will not be covered in this article. This article is written from a civilian Libyan’s perspective, focusing on the people who are caught up in the crisis, and the every-day consequences that follow.

Civil Libyans stand in line for days just to extract cash out of their own bank accounts; and due to the lack of liquidity in the national banks of Libya, the amount of cash one can extract (from one’s respective bank account) per day is limited.

One can sometimes extract 200 Dinars per day. Other days the bank runs out of cash and one can therefore extract none, whilst there are other uplifting times, where you are very lucky to extract 300 Dinars – all depending on the liquidity of that particular day.

A typical storyline would unfold as the following: To extract money from the bank, you ask for a day off from your employer, take a trip to the local bank and stand in line from 6 am till 3 pm under the burning sun. After finally holding your 300 Dinars in your hands, you are very happy and grateful to God.

Because you know what you have to go through in order to get the next handful of cash, you become frugal, calculating your every transaction and thinking twice before every purchase. 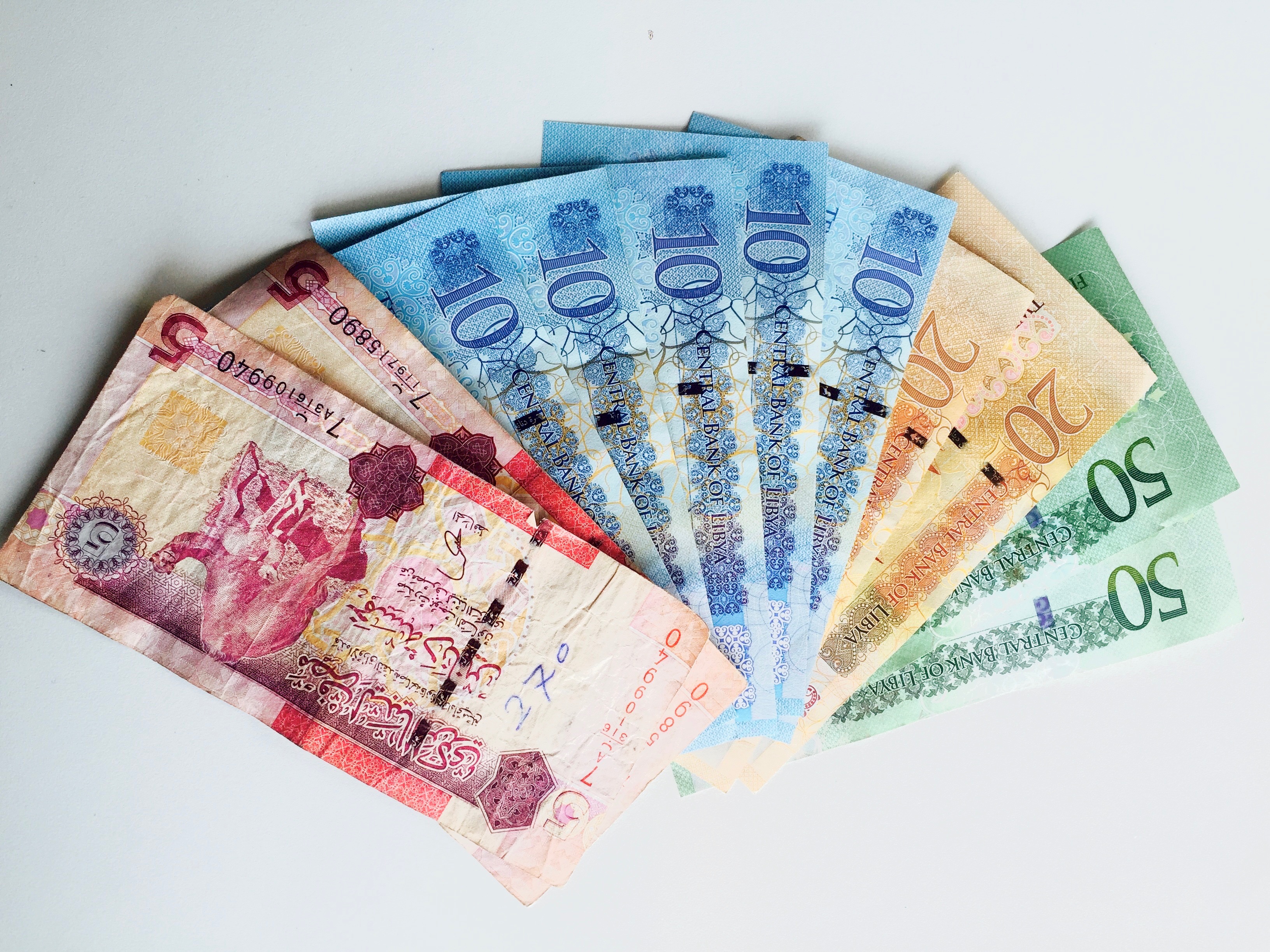 200 Libyan Dinars. An example of what one withdrawal looks like. Photo: Sara Khalil/The Turban Times

“We get treated as beggars, but all we’re asking for is our own money”

“Last year I went to the bank to extract money. I was there around 11 am and there was a never-ending queue. I stood in line till around 3 pm when a security guard shut the doors to the bank and shouted that they’ve run out of cash for the day. People went mad!”

So tells Eman Ahmed, a master’s graduate who works as a full-time architect at an architecture and design company, about her experience withdrawing her salary from the bank.

“I consider myself luckier than most” – Eman Ahmed

She continues: “There was a man who started giving a heated speech about protesting at The Martyr’s Square. There was a woman who started crying – she was there from 6 am, and she was there the day before as well, with no luck. I went home in tears that day. To see all those people suffering was painful. We get treated as beggars, but all we’re asking for is our own money.”

After that incident, Eman never went back to the bank. She’s currently living under her parents’ support. “I consider myself luckier than most”, she says in a closing statement.

Younes Saleh, a husband and a father of two, has been working as an electrical engineer for 5 years at an IT company. He loves his job and always has. Unfortunately, ever since the liquidity crisis started evolving, his dream job simply wasn’t enough to bring food on the table.

“Recently, I took a part time job at a café, just for the cash. I now work from 8 am to 4 pm at my day-job and then from 5 to 10 pm at the café. The only time I see my kids is when I drive them to school in the morning.”

Younes is in a position where he has to reconcile keeping his dream job with supporting his family. As a result, he has to sacrifice spending time with his family, and any other free time for that matter. If he were to prioritize family time, he would have to let go of his day-job, which is a choice he never thought he would have to make.

“I haven’t thought about quitting my day-job to get a full-time job that pays cash instead. I love my current job. I’m too attached to just quit because of a crisis. I don’t think we should just surrender to it. I’m just hoping that all of this is temporary and that everything will go back to normal soon,” he says with half a smile on his face.

Eman and Younes are just examples of people going out of their ways to keep the jobs they love and still be able to live. And as Eman stated, they are considered one of the lucky ones, compared to the people who don’t have any other choice but to spend their time in queues in front of banks to get the next handful of cash.

“So what’s your payment method?” 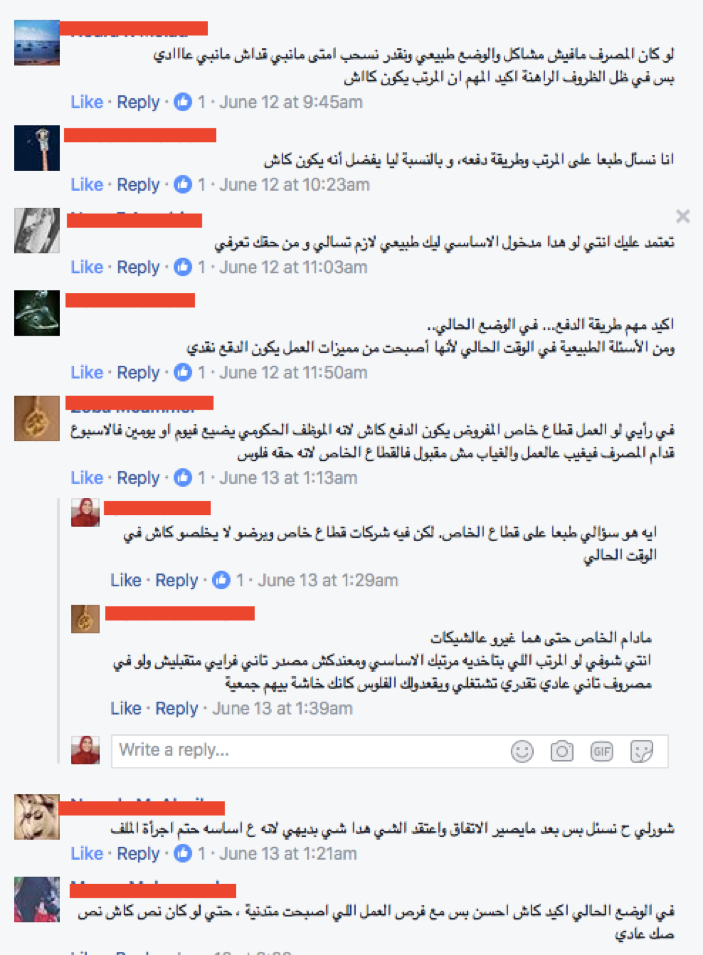 Like Younes applied for a cash-paid job, many others wish and strive to do the same.

On June 12th, a discussion emerged in a Libyan Facebook group, called Project Silphium. The discussion was about whether or not to ask about the payment method at job interviews now that we’re in a crisis.

Many who were commenting agreed that cash was indeed an important factor for during this crisis and that if the job was not cash-paid – they wouldn’t be interested in it.

Libyan citizens apply for cash-paid jobs now more than ever. Companies who pay cash are now an attraction, and candidates bluntly admit that the reason of their application for a job there, is because of that fact.

Getting paid in cash has now become a Libyan luxury.