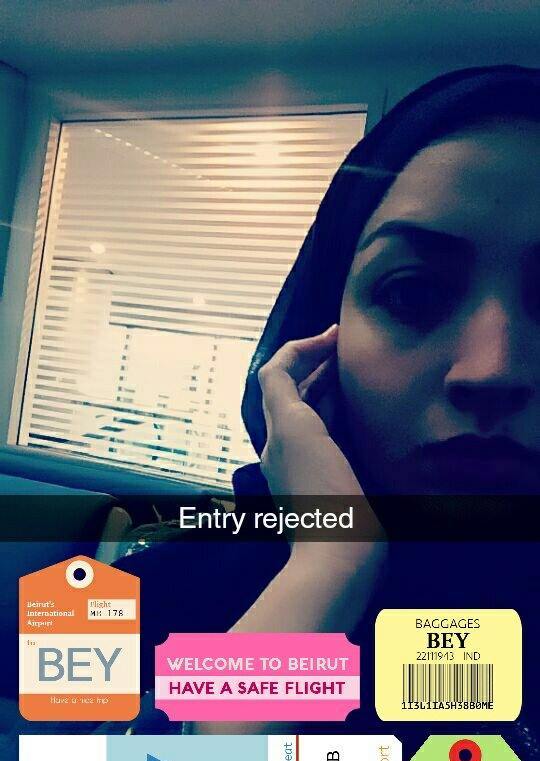 I arrived at Beirut Rafic Hariri International Airport for the first time on April 25, to enjoy the Easter holidays along with a group of other Palestinians who paid for the same trip. I had prepared very carefully. I completed all the legal matters, including obtaining a visa that would enable me to take a holiday selfie in the midst of Beirut.

Waiting at the queue to get the visa stamps on my passport, one Lebanese General Security officer was very welcoming and about to allow me into Beirut. As I was taking $20 from my bag to pay for a visa fee, another officer interrupted, stressing that Palestinians are not allowed in Lebanon.

He collected the passports and headed to his boss. My bad luck continued. The border official in charge was anti-Palestinian and had xenophobic attitudes towards Palestinians. After hours of negotiating, explaining I had a visa to enter, he ordered one of his employees to write up a blacklist that had my name and the names of the people I was travelling with. Speaking with a tone of arrogance and hostility, he stated, “my mom is a Palestinian and I cannot wait to get rid of her. Do you want me to let you into Lebanon?”

Other Lebanese officers sitting on a couch stated that the Palestinian Ambassador to Lebanon had no power or authorization to do anything. If I contacted him, they said, he would not be able to help me.

I was denied entry to Lebanon. The officers gave no clear reason or justification, but claimed I normalize with Israel, the occupying power, because I live in the occupied Palestinian territories.

The Lebanese General Security officers detained me for more than 15 hours, forbidding me from contacting anyone, including my own family and the embassy. I was deprived access to water, food, a lawyer, and Wi-Fi. I had to ask several times for water and food. I got it at the end and paid for it myself.

While detained, I was taken to an isolated, locked up, very cold, and unhealthy room, which did not have any windows or phone service. I was held with other deportees who had been subjected to severe and inhumane treatment, abuse, and violations of their human rights. They were either Palestinians or Syrians. Nobody knew where I was, not even my mom and dad.

I expressed disappointment with my detention to the officers who guarded me, but nothing changed. They said that other Palestinians had been refused entry for carrying passports with Israeli stamps on them, as called for by Lebanese law. My passport, however, did not have such stamps.

At dawn I was notified that I was to stay in detention inside the airport for a total of five days, because that was when the next flight was available on the airline I flew in with, back to the city where I departed. I rejected this and kept asking for a new reservation. The deportation officers were a bit nicer than the previous officers I met the night before. They wanted to help, so they let me and the others in my group contact the tourism office that reserved our holiday. We were informed that we were going to be deported to Amman’s Queen Alia International Airport, where we came from (because we do not have access to airports in Palestine).

While waiting for the flight to Jordan, Salim, another Palestinian in my group, felt pain in his chest and was barely able to breathe. The deportation officer panicked and informed other officers at the airport. He even called a doctor for Salim. The doctor came to check up on Salim and brought expired cough medicine with him. When Salim noticed, the doctor took the medication and left. We did not see him again. Salim’s son, Zaid, 10, who was held with in a room with money scammers, had a little chit chat with an airport officer. When the officer learned Zaid was only 10 years old, he stated, “you are still very young, but you’ll never have the chance to visit Lebanon during your whole life. “Great,” Zaid responded with pride and hidden disappointment.

Long story short; I was sent back home after being blacklisted from Lebanon for the rest of my life. The fracture in my heart will stay there forever. The Arab world practices more inhumane treatment against Palestinians than the occupation itself. I need a whole life to recover from the inhumane situation I went through. I suffer from the consequences of the Israeli occupation on a daily basis. Do I deserve to be treated the same way from an Arab neighbouring country? Checkpoints, interrogation, restrictions on movement, and rights violations are not restricted to Israel, the occupying power – they extend to Lebanon and other Arab countries in the region.

I call upon all free citizens to take action against Lebanon’s racial discrimination policies against Palestinians coming into Lebanon as tourists. This draws us to the Palestinian refugees issue in Palestinian refugee camps in Lebanon, where the Lebanese authorities implement its apartheid laws, which deprive Palestinians from their basic human rights and treat them as second-class citizens.

I also call upon the Palestinian Ministry of Foreign Affairs to take all necessary procedures to protect its citizens through the mandate given to the embassies of the State of Palestine regionally and internationally.

It wasn’t us against them, but an evil which as a people Armenians have faced.