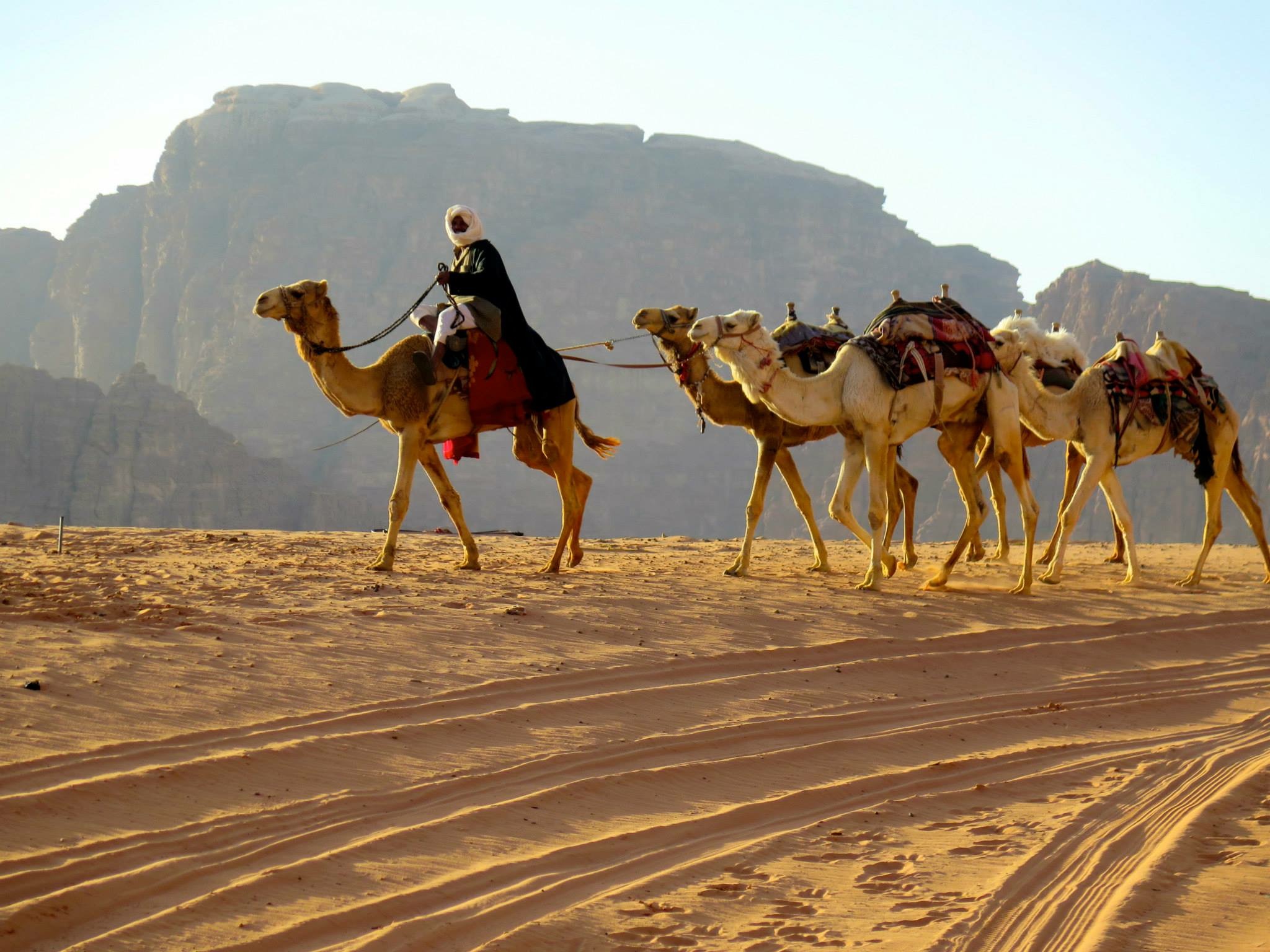 Bedouin with his camels, wandering in the Wadi Rum desert. Photo by Victoria Thorsen

Bedouins – the backbone of Jordanian culture

This entry is the first in our new section, “The Peoples of Jordan” – a series on Jordan’s ethnic groups and diversity, which aims to show how the population of Jordan is made up of numerous ethnic groups along with the Jordanians. Through a number of articles we look into how people of various nationalities residing in Jordan contribute to the diverse environment of Jordan’s capital, Amman. Each article presents and portrays a different ethnic group through text, pictures, videos and interviews that provide readers with insight into Jordan’s social mosaic.

The first article in the series is about the Bedouins of Jordan.

Did you know that the Bedouins of Jordan are regarded as the backbone of Jordanian culture and that they are often termed as the “pure blooded” people of Jordan?

Bedouins in Jordan speak Arabic but many non-Bedouins have a hard time understanding them as they not only have a different dialect but also tend to use different words and expressions. They also dress differently from the urban population and their traditional clothes are better suited for a life in the desert.

Jordan is very proud of its Bedouin heritage, and you should read along if you’re curious to know more!

The Bedouins, or in Arabic, the Bedou, which means desert dweller, are the original population of Jordan. Long before the borders of the Jordanian kingdom were drawn, Bedouins wandered the desert areas between Palestine, Jordan, Iraq and Saudi Arabia. They traditionally lived a nomad lifestyle, migrating seasonally depending on grazing conditions. Only a small part of Jordan’s Bedouins maintain the nomad lifestyle today as many have settled down to cultivate crops. Some, however, have managed to combine the two lifestyles. The Bedouins who still practice pastoralism and drive their herds of goats, sheep or camels across the desert for grazing, tend to camp in one spot for a few months until the food found in the area is exhausted by the animals. Often, the only connection between the nomadic Bedouins and the modern world is the possession of a pick-up truck used to move their animals long distances, plastic water containers and perhaps a kerosene stove.

Bedouin men wear a lose thoub with a pair of serwal underneath. The head is covered by the traditional headwear; the shemagh. The traditional Jordanian shemagh cloth is red and white. Wearing the shemagh is a sign of male status and the person wearing it is assumed to be able to uphold the responsibilities and obligations of manhood. This outfit provides men with a loose cover that protects them from the harsh sun and blowing sand. A Bedouin women will usually wear the madraga, which is simply a long black dress sometimes decorated with embroidery. Bedouin women also cover their heads; their hair is covered with an usaba, which is a black hair band wrapped around the head and tied at the back or on the side of the head. Married women can be recognized easily as they also cover their forehead with the band.

Residing in the southern parts of Jordan, traditional Bedouin communities are identified by their characteristic black goat hair tents, also known as beit al-sha’aer in Arabic. Did you know that the tents are made from sheep and goat hair and that they are spun by the women of the tribe? The tent cloths are designed in a way so that they can easily be rolled up and moved suiting the nomadic lifestyle. The characteristic black tents are woven from domesticated sheep and goat hair. Groups of women work together as they sew together strips of goat hair that make up the tent cloth. The tent cloth is woven loosely to allow heat to disperse, and even though the black color of the tent absorbs the heat, it is still cooler inside the tent than outside.

The tent provides shade from the sun as well as insulating from the cold desert nights. In the occasion of rain, the yarn swells up and closes the holes in the weave, preventing water from entering the tent. The goat hair is naturally oily, which has a repelling effect on water and therefore allows people inside the tent to stay dry. Tents are traditionally divided into a men’s and a women’s section and the furnishing is extremely simple consisting of carpets, mattresses and pillows. The women’s section, usually separated from the men’s section, by a curtain, also includes room for food storage and cooking utensils and is reserved for women only with an exception of the owner of the tent. The men’s section is used for receiving guests – a crucial element in Bedouin life.

Bedouins are well known for their hospitality and welcoming of guests and it is a principle, rooted in the harshness of desert life, that no traveller or guest is turned away. According to Bedouin customs, visitors, be it friends or strangers, are allowed to stay as long as they please. No questions about the purpose of the stay are asked by the host for up to three days. However, on the fourth day, hosts are allowed to ask the guest for their name and the purpose of their visit.

The men’s section in the Bedouins’ tents usually serve as the center of social life. Here, sweet tea is served in generous amounts. Both coffee and tea plays an important role in Bedouin social life and guests are always offered tea upon entering a tent.

With the hawin, the person grinding the coffee makes a rhythmic sound creating a beat which is said to be a way to let people in the area know that coffee is being brewed and that they can come over to enjoy a cup. Coffee is a big part of negotiation in Bedouin culture. When Bedouins do business, negotiate or discuss marriage, coffee plays a crucial role and it is drunk to confirm a deal or a decision.

Video on how to prepare coffee, Bedouin style.

If your stay with a Bedouin family extends to more than an hour you will almost certainly be served food. Bedouins are very hospitable and will offer their guests and visitors food and drinks, even if they don’t have much themselves. The Jordanian national meal, mansaf, is originally a dish cooked by Bedouins but it is now regarded as the national dish of Jordan and is served almost everywhere in the country. The dish consists of rice, jameed sauce and lamb. It is, however, said that mansaf was originally served with bread instead of rice and that rice wasn’t introduced to the dish until after the 1920s, following the popularization of rice in Jordan. The jameed is made of hard fermented sun-dried sheep or goat’s milk which can be stored and preserved for months in the warm desert climate. When cooking mansaf, the jameed is softened into a broth, which the lamb is then cooked in. Mansaf is served on special occasions; to honor guests and on major holidays, as well as on Jordan’s Independence Day. It is traditionally eaten collectively from a large platter, Bedouin style, standing around the platter with the left hand behind the back using only the right hand to eat by shaping the rice smothered into small ball shapes.

The Bedouin society has a collective social structure with customs and values based on a code of honor calling for total loyalty to the clan and tribe. It is often said that Bedouins are outside the governing authority of the state and that tribal legal code in many instances overpower Jordanian civil law. Bedouins use a number of social mechanism – including exile from the tribe, exaction of “blood money” or vengeance to right a crime and payment of diyyeh which is a compensation paid to a murder victim’s family by the family of the murderer – to maintain order in the society. There have been several cases where tribal custom has come into conflict with civil law in Jordan. Advocates of tribal law argue that punishments enforced by the tribes are appropriate and acceptable to families of victims and that the tribal law system assures quick action and ensures that cases are resolved without leaving desire for revenge after a settlement is reached. The tribal justice system includes principles such as atwa (reconciliation), diyyeh (compensation) and jalwa (forced relocation of an offender).

In 2015, Jordan’s interior ministry drafted its first-ever law on tribal customs, integrating it as a part of a modern civil state in order to unify, regulate and update tribal customs for the modern world. Officials believed that tribal justice to a greater extent can reach citizens in a way that the government or a court could not.

Modernization has changed the Bedouin lifestyle and blurred the romantic idea of a traditional Bedouin life and culture. Since the 1980s, The Jordanian government has relocated Bedouins inhabiting the caves of Petra, offering them housing and necessary services such as electricity and running water. Some people state that they were forcedly removed from their homes while other state that they welcomed the relocation, gaining access to education and hospitals which benefit their children.

Today, many Bedouins settle down in houses in small desert villages but many still have some sort of informal housing or tents connected to their house, which allows people to travel into the desert. Keeping animals is still an important part of life and sheep and goats are usually kept in a yard or a garden connected to the house. Many are fully dependent on tourism and among other things offer tourists “the real Bedouin experience” in Bedouin camps in the Wadi Rum desert.

There are, however, still many Bedouins living a traditional Bedouin life but they are nowadays often in possession of smart phones and other modern day commodities. Despite the modern touches on the traditional life, Bedouins are still regarded as the backbone of Jordanian culture.

Want to know more about the Bedouins of Jordan?

For a deeper understanding of Bedouin life in Jordan, I recommend reading the bestseller, “Married to a Bedouin” written by Marguerite van Geldermalsen, who married a Bedouin and lived a traditional Bedouin life in a cave in Petra.

I also recommend watching Al Jazeera World’s documentary, shot in Petra, where they explore the history, traditions and daily lives of the B’doul – a Bedouin tribe that used to live in Petra – particularly the challenges they face as Bedouins in a tourism centre in present-day Jordan.