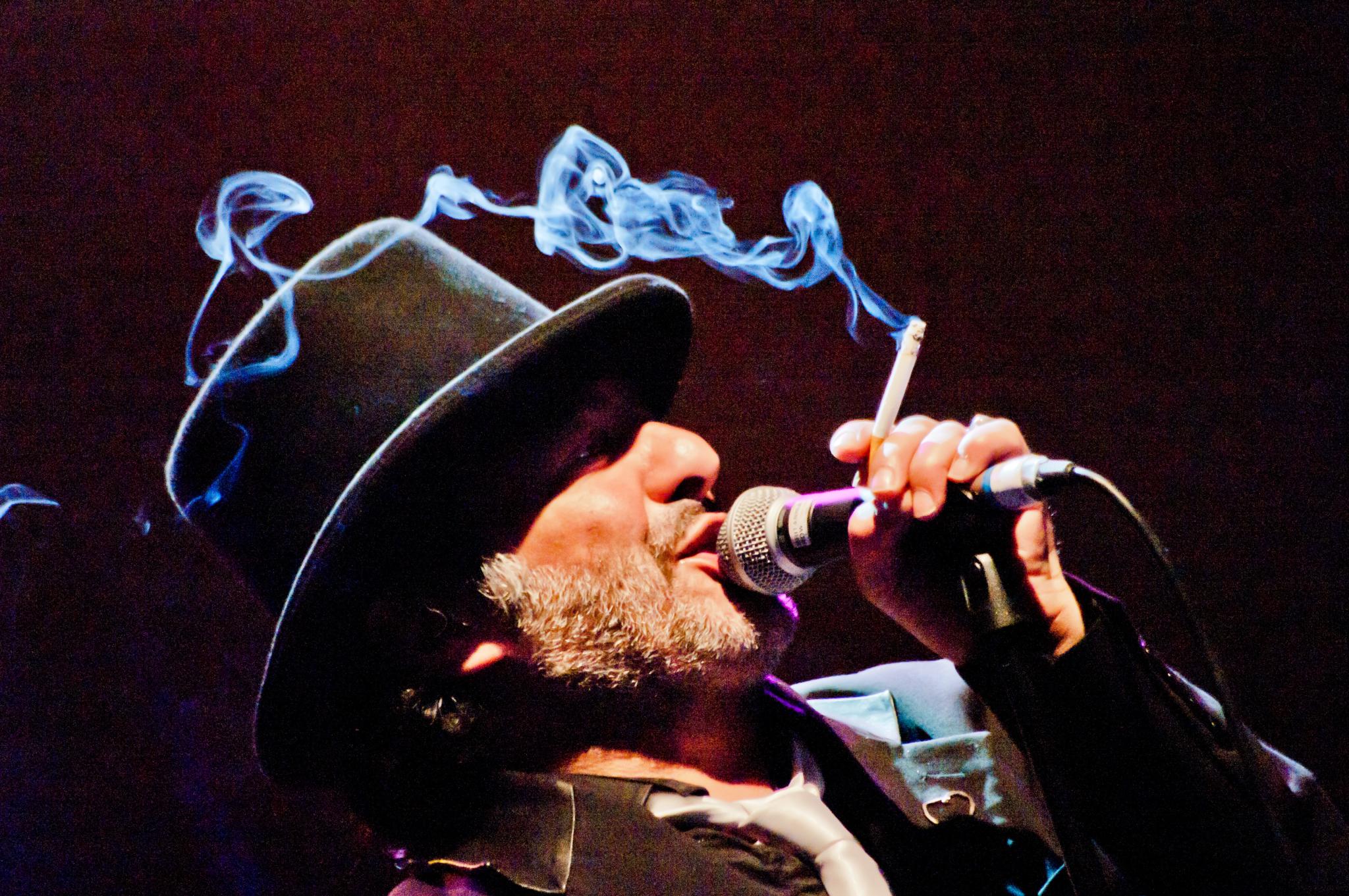 Rachid Taha: A symbol of Algerian resistance and postcolonial legacy

To claim the late Rachid Taha as a raï singer is to do a great injustice to his legacy. Yet raï’s origins as a genre of Algerian resistance certainly set the precedent for Taha’s defiant style.

Who can forget Rachid Taha’s appearance with Faudel and Khaled, two of Algeria’s top raï singers, in a 1998 Paris arena concert backed by a full Egyptian orchestra? When the group later released an album under the name “1,2,3, Soleils”, Taha stood out even more. Where Khaled and Faudel are all grins, suave melodies, and flawless vocals, Taha was a grating voice, a jarring grimace, a body dancing raucously to its own cacophony of punk, funk, reggae, pop, and yes: raï.

To those who do not know, raï developed as a folk genre of movement and cross-cultural fusion, mixing Spanish, French, Arab, African, and Bedouin music. It’s often considered the genre of movement and nomadic resistance against French occupation. Taha, too, refused to stand still—not in one genre and not under the singular, convenient package of what it means to be “Algerian pour toujours, et Français tous les jours” [“Algerian forever, and French every day”], as he titled the final chapter of his autobiography.

This begs the question: now that Taha has died, how should we remember his legacy? Do we remember him as an agent of great eccentricity or a mouthpiece for the marginalized?

Rachid Taha was born in 1958 at the height of the Algerian War of Independence from France, when Sig—near the Algerian seaport town of Oran—was Saint-Denis-du-Sig. He moved to France with his family at the age of ten, and, like every immigrant, grew to work a series of exhausting, unsatisfying jobs. He worked in a central heating plant outside Lyon, painted houses, had a stint selling encyclopedias door-to-door, and, of course, spent a decent amount of time bussing tables in restaurants.

A creature who found himself comfortable with the overworked, underpaid, and marginalized, he took a DJing job in the evenings, where he mixed the likes of Led Zeppelin with Umm Khulthum and salsa with punk favorites.

He ran a night club in Lyon called Les Refoules, refoulé itself a word characterizing someone who is rejected, repressed, or pushed away. Refoulement, a legal term describing the act of forcing asylum seekers and refugees to return to their country of origin, seemed to be the perfect fit for a displaced Taha.

For Taha, otherness was to be questioned, celebrated, and fused with more otherness. After meeting two Moroccan brothers Mohamed and Mokhtar Amini, he became the lead singer of the band Carte de Sejour (Residence Permit) in 1980, a reference almost akin to Mahmoud Darwish’s “Identity Card”—that inevitable document legitimizing your presence as a colonized entity with temporary status.

A band inspired by Arab, trance-like Gnaoua music, and punk music was not exactly welcome in a world dominated by headlines of an oil crisis and a Gulf War. The fact that Carte de Sejour formed on the heels of arbitrary deportations in France around 1977, when the country introduced legislation banning migrants from renewing their visas, also didn’t help. Rising unemployment, as usual, was blamed on France’s inability to control migrants, with a second wave of post-colonized beurs (second generation North Africans living in France) facing a barrage of discriminatory laws.

It came as no surprise that Carte de Sejour wasn’t incredibly popular in France. Much like the members themselves, the group existed along the margins, drawing attention through a controversial remake of the sentimental wartime Charles Trenet ballad, “Douce France,” in 1986.

The chanson was composed during the German occupation of France (and, notably, the French occupation of Algeria). Though no lyrics were changed and Trenet himself granted Carte de Sejour full permission to cover the song, Taha’s biting, ironic rendition of the anthem led radio stations to ban it altogether.

Carte de Sejour later distributed copies of “Douce France” in France’s parliament as lawmakers were debating changes to the country’s nationality laws. Taha, with dyed blond hair, stated that his aim was “to confront all the public representatives with the migrant’s perspective”. Indeed, the statement would become his credo.

Taha’s career flourished after Carte de Sejour split up, establishing a successful solo career on notions of national and cultural identity. Identity, as Taha would have it, is inherently performative, and should thus be taken with a grain of proverbial salt. Arguably, he was a performer first and a singer second, his album covers at times just as rhetorical as his music.

His 1995 album Olé Olé features Taha with blue contact lenses and blond hair, borrowing a dance club aesthetic from his days as a DJ and merging raï with a healthy dose of electronica and rock.

No musician grasped the concept of hybridity quite like Taha—the idea that decades of cultural exchange between France and its former colonies would create generations of diasporic heartbreak. To the novice, his work might come off as discord, a patched-up concoction of genres from his old DJing days, but he was strategic in both his original compositions and the songs he chose to cover.

Perhaps the most popular and relatable of Taha’s covers came from 1997’s “Carte Blanche” album, in which he takes on Dahmane El Harrachi’s 1973 melancholic Algerian émigré ballad, “Ya Rayah” (“Oh Emigrant”).

The song’s initial chorus alone was enough to attract Arab and international fans alike, creating a pang of solidarity among all immigrants who wished to one day return to the home they left behind:

The international popularity of “Ya Rayah” defined the singer’s style as one that transcends even fusion, as a style of experience, pain, frustration, injustice, resilience, and hope—all at once. On an international stage, Taha was no longer experimenting; he was solidifying his presence as a liminal figure.

Taha’s music soon became twofold: he developed a repertoire of critiquing the fallible nature of Arab politics and the Western caricatures and Orientalist ideas that misunderstand it.

In his 2004 album Tekitoi (French slang for “Who are you?”), Taha covered “Rock the Casbah” as it should have been: in Arabic and reworked as “Rock El Casbah”. He claimed in multiple interviews that the song wouldn’t exist if it weren’t for the fateful night in 1981 when he handed Carte de Sejour’s demo to The Clash’s Joe Strummer after their concert at the Théâtre Mogador in Paris. In 1982, “Rock the Casbah”, with its stinging electric guitar and dance beat—both Carte de Sejour staples—was born.

Taha’s renouncement of dictatorship and repression in the Arab world with a snarled, grating voice in “H’Asbu-Hum” (“Ask Them for an Explanation!”) captured the insistent rhythm of a political demonstration (and bringing about criticism that would follow Taha throughout his career):

For some, Taha was perpetuating ugly stereotypes through his aggressive vocals and an amplified, course accent. The roughness of his speech offended both French purists and Arabs who spoke a more standardized Arabic, the latter group claiming that the Arabic language, in all its beauty and poesy, should be used in an elegant—not corrosive—fashion.

Instead of being met with applause, Taha’s music elicited a series of mixed reactions from French and Arab audiences.

His talent was in hiding under layers of musical eccentricity. His performances were, to the unsuspecting French white working-class eye, a distraction rather than a threat. He was able to speak his refined Parisian French on command when he needed to play the part of eloquent Frenchman while also retaining the most essential, guttural aspects of his accent. He did not resign his so-called “Arabness” for the sake of integration; he rejected the notion of a homogenous Arab, Algerian, or beur existence.

He made no apologies for his raspy voice or growling dialect, exaggerating the rolling of his ‘R’ frequently throughout his Arab/pop reworks in albums Diwan and Diwan 2.

Both albums featured a heavier mixture of oud, Egyptian strings, qanun, and Moroccan flutes without losing his polemical edge. Mouth gaping, tongue sticking out, he screamed, “Foreigners, you are the cause of our problems!” in “Voila, Voila” and covered Mohamed Mazouni’s “Écoute-Moi Camarade”, in which a man warns his friend about a woman who will never love him but will instead profit from his labor and throw him aside. In this context, the woman is France personified:

‘Bonjour’ brought the world a more tame, subtle Taha, while 2013’s Zoom was described by critics as less about revolution and more about refinement. Instead of losing himself in the 21st Century pop/fusion landscape, he emerged as an innovator of “rock’n’raï”, returning to Umm Khulthum in “Zoom sur Oum”, covering Elvis with Jeanne Added (“Now or Never”), introducing an oud-infused anthem a-la-Johnny Cash (“Ana”) and critiquing the insidious culture of forced marriages in “Jamila”.

It’s hard to say if Rachid Taha’s final album will be a posthumous one.

According to the Associated Press, he was wrapping up ‘Believe’, due for release in 2019, and passed away days before he was scheduled to film a music video for the song “Je Suis Africain” (“I am African”), perhaps a nod—in the most Taha-esque way—to the “Je suis Charlie” slogan.

No doubt about it: Taha created the template for modern French pop, giving North Africans the breathing space to snarl, to mock, and to relish in our heritage while complaining of its shortcomings. It’s no easy feat to metamorphose from delinquent to celebrated provocateur.

When coming to terms with Taha’s legacy, it’s important to note the precarious manner in which non-Arab music critics talk about his work.

Seldom do they describe his style without resorting to clichés and orientalist fixations, at times even considering his music as the backdrop to North African shanty towns and “primal” scenery. At best, Taha has been celebrated on niche music blogs, often in comparison to some other shabby-looking musician with a similar knack for shock value.

Taha lashed out against France’s blatant racism and the exploitation of North African immigrants while critiquing those very immigrants as slaves of tradition—both musically and politically. He combined playfulness with rage, never confusing memory with nostalgia (he once said, “I’m a little melancholic, but never nostalgic”). He juxtaposed the dormant, fixed ideals of daily life with the rhythms and raucousness found in Maghrebian celebrations.

This is Rachid Taha as he should be remembered: a postcolonial figure.

Between Iran and Zion: Lecture by Lior B. Sternfeld