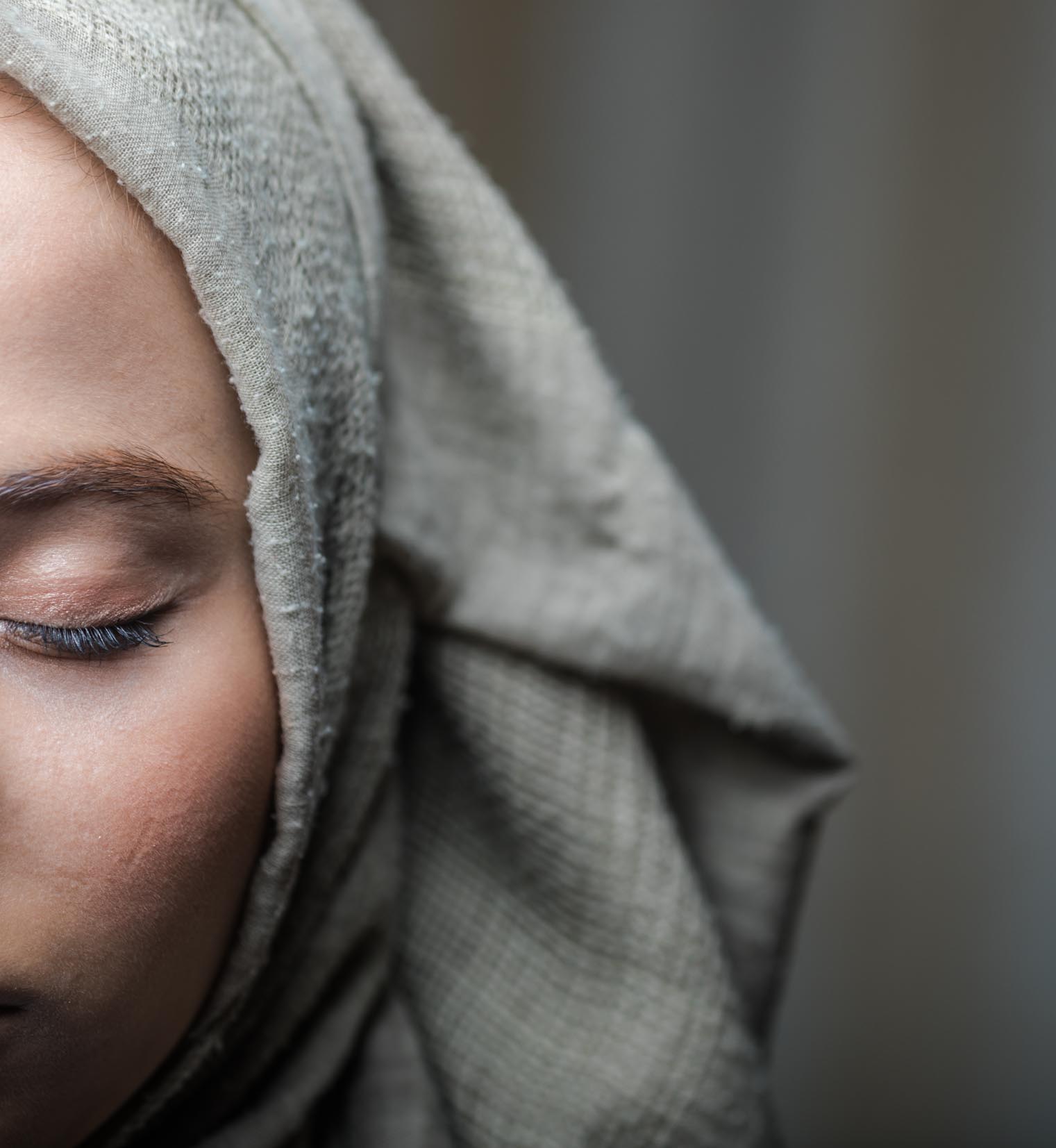 From child to bride: Fatima’s story

_CHILD MARRIAGES occurred in Syria before the war started in 2011, but the poverty and unsafe living conditions among Syrian refugees have contributed to an explosion in the number of Syrian child brides.

ISTANBUL, TURKEY — It is five o’clock in the evening. The sun is about to set in a poor area of Istanbul known for housing Syrian refugees. It is summer, the air is burning and there is a constant flow of people in the streets. We leave the sizzling crowd and enter an old and worn apartment building. On the second floor, a young girl opens the door and leads us to the living room in a small and almost empty apartment. In the room, there is a mother and her four daughters. One of them is Fatima.

Fatima is standing in the center of the living room. The light brown hijab covers her hair and she is wearing her finest long black dress that makes the gold she is wearing shine even more. She seems shy, and when our eyes meet, she looks down and hides her smile. She is young and extremely beautiful. One of her siblings places a pink chair in the middle of the room where Fatima sits down. She is silently looking and awaiting. She has agreed to meet us and tell the story of her marriage.

This is the story of Fatima, whose childhood ended too early. Like many other young Syrian girls, she was married off by her parents at age 16. She got caught up in a situation she couldn’t control, abused and kept isolated by a young Syrian man and his family. The situation culminated in attempts at her life, at which point she escaped her husband and his family. 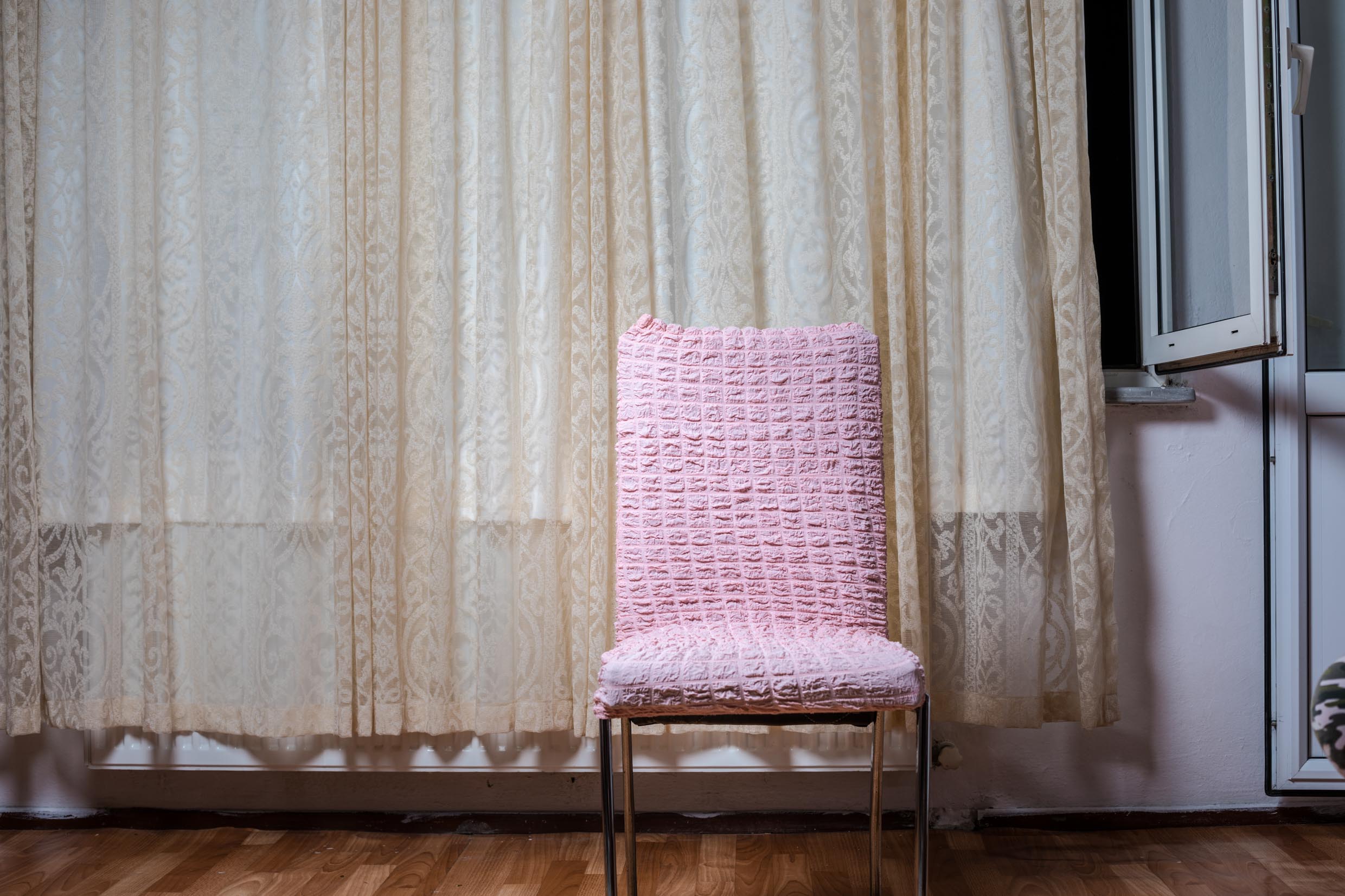 Fleeing the war in Syria

In 2011, Fatima still lived in Aleppo. She was 10 years old when the war turned up at her home. Fatima’s family were all sitting at the dinner table, except for one of her younger sisters, when suddenly a bomb fell and detonated. Miraculously, everyone survived, but Fatima’s sister who wasn’t at the table was injured severely. Their house was destroyed and the family found themselves internally displaced in Syria. For more than a year, they struggled to survive by staying in parks and in schools used as temporary homes for families, until they finally managed to leave Syria.

Fatima was 11 years old when they crossed the border to Turkey and she was immediately forced to work. She worked at a sewing factory 13 hours a day for a monthly salary of 350 Turkish lira. There was no time for school as the family depended on her wages to pay the rent and daily expenses. They attempted to get to Europe several times by crossing the Mediterranean but failed every time. Istanbul became their place of struggle.

“It was in the beginning of the war, when we lived in Aleppo. A plane came. There was fire everywhere. My sister got burned.” – Fatima

They are shattered by poverty but are too afraid to go back to Syria. “Syria is not a safe place for five beautiful young girls,” Fatima’s mother explains. “I love my country and I hope to return one day, but I am scared to go back with my daughters. We lost our home, what can we do? How can we work? If I send my daughters to work, the boys will… you know.”

Today in Istanbul, Fatima still works at a sewing factory. Month by month, she takes care of her parents and sisters. Her monthly wage is 1,200 lira, but it is still far from enough to keep the family alive. The rent and electricity alone is 1,400 each month and on average the family needs 3,500 lira all together. In order to get the money needed, the mother and the smallest sisters go from door to door, asking their neighbours for money.

Fatima’s father works on the streets, playing the flute. On good days he earns 100 lira, but most days he returns empty-handed. Sometimes he is detained by the Turkish police for working on the streets. Day after day, he drags himself out on the streets hunting for money. As time goes by, he gets thinner and thinner. The family hasn’t been able to afford anything more than two small meals per day for a long time. Tea and bread in the morning and, if possible, a hot meal in the evening. Their bony faces and skinny bodies are living proof of their despair. 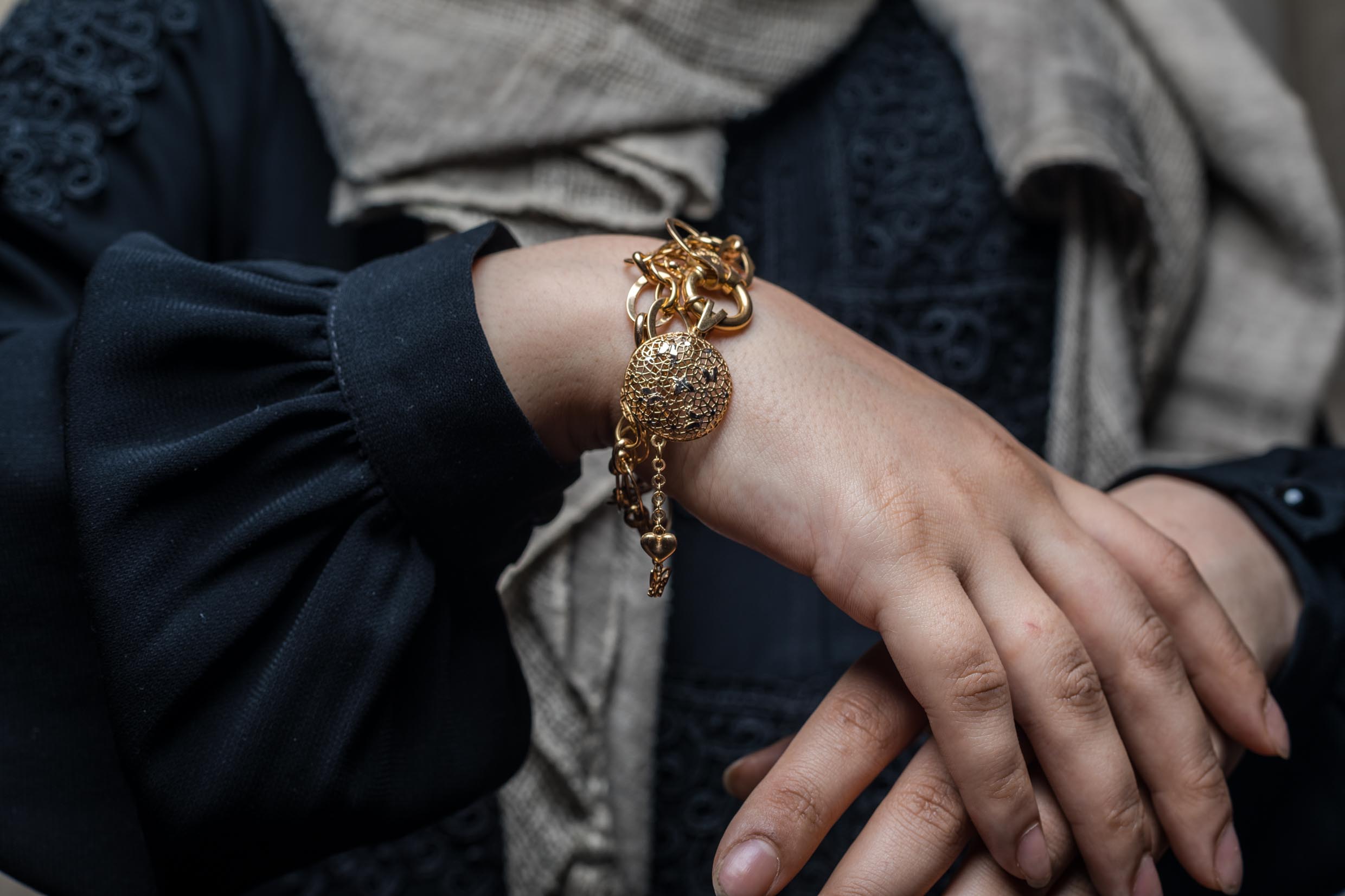 One day, a young man aged 23 and his family came to the apartment to propose. Fatima’s parents were promised the moon and the stars in return for Fatima.

Fatima’s mother glances at her daughter on the pink chair and pauses for a while. “I looked at my daughter, she was tired. Working since she was 11. Working, working for 5 years. I thought it was time for her to do something good for herself. We decided to let her marry in order to achieve a better life. Maybe… maybe she would be able to eat.”

Fatima’s mother looks down in pain and shame. Fatima touches the golden bracelet around her wrist, then breaks the silence by adding: “They turned out to be liars. On the day of the wedding, I was picked up in a van carrying water.” 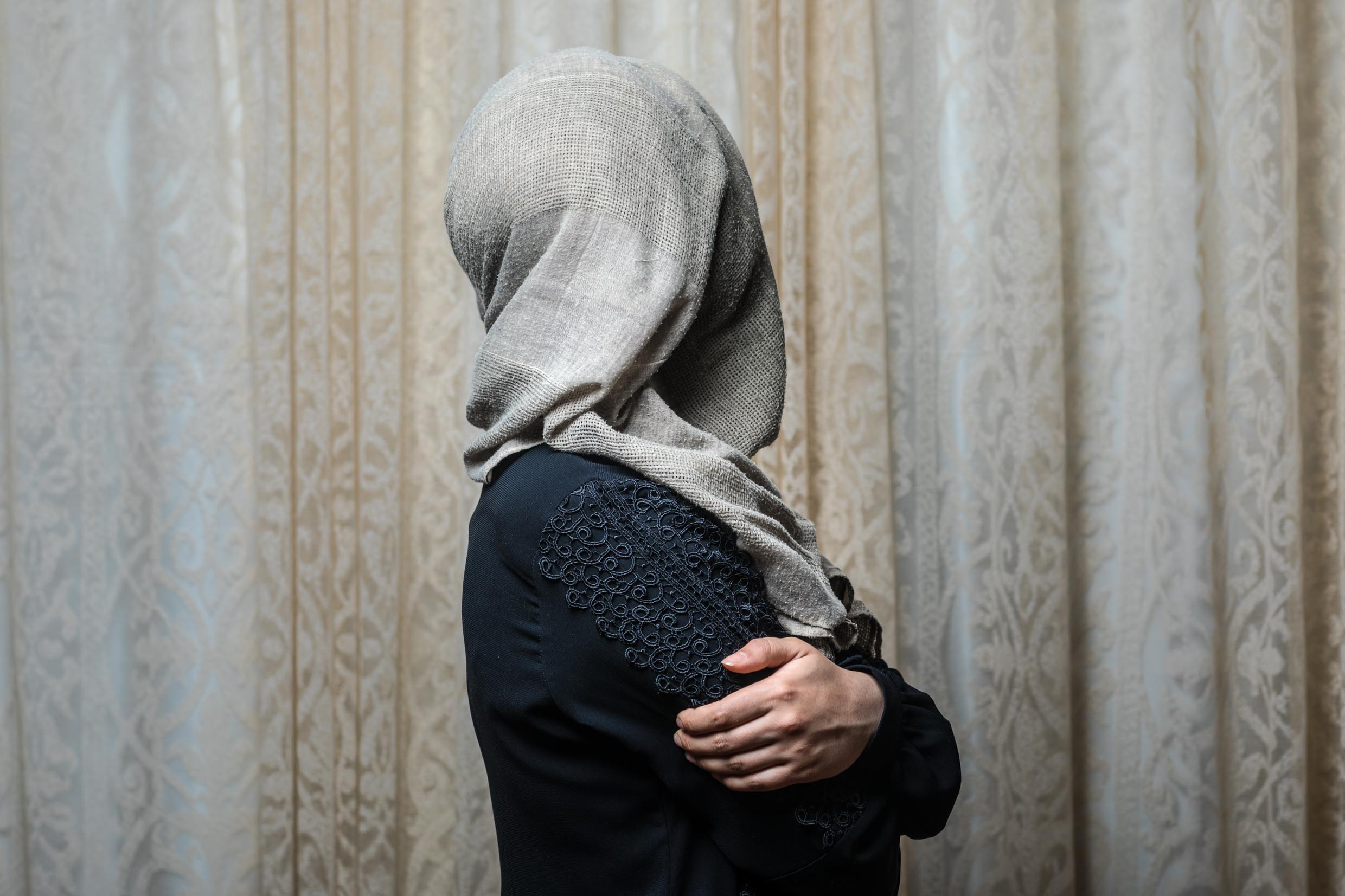 Three weeks after the proposal, the wedding took place. It lasted no more than an hour. When asked about the party and the wedding night, Fatima lowers her voice and says she would rather not talk about it.

Her mother talks instead: “It was not a wedding party, it was more like someone had died. We were just sitting there. My family tried to dance a bit, just us. When they came to take my daughter, it was like she was an animal.”

The water carrier took Fatima to another poor area in Istanbul, far from her family. Fatima now lived in the house of her parents-in-law. Cleaning the house was her duty, and only a week after moving in, things changed dramatically. Fatima’s husband wanted her to clean the kitchen, but when she disobeyed, she was beaten for the first time. The beatings continued for the next two months.

“With each small mistake, he tried to do these bad things to me. One time, when I told him I didn’t want to go to his sister’s house, he pulled me around by my hair and beat me.” – Fatima

It had been almost two months since Fatima got married. She and her husband Mohammad woke up and realized the battery in Mohammad’s phone was missing. Water had been spilled on the phone, too. Fatima suspected her parents-in-law had destroyed the phone, to provide Mohammad with an excuse to confiscate Fatima’s phone so she couldn’t stay in touch with her family.

The young couple got into an argument and started shouting and fighting. Mohammad turned to his father for advice. His advice was heavy beatings and an attempt to strangle Fatima – something that had happened before.

“When he beat me up the family just looked, nobody did anything. When he put his hands around my neck, I couldn’t breathe,” Fatima recalls. 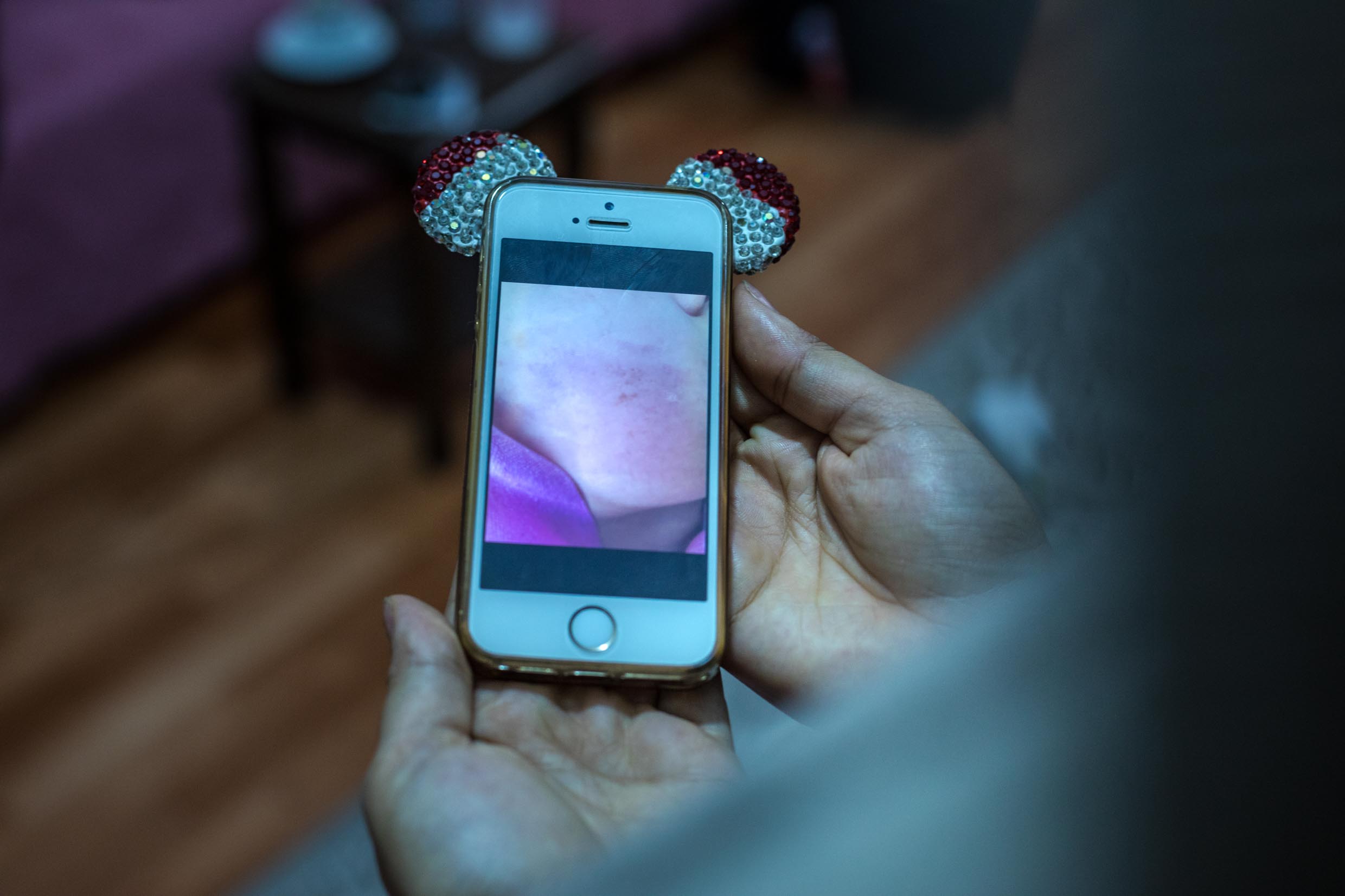 That evening, Fatima ended up severely beaten, humiliated and locked up in a room. At night, she managed to open the door with a knife. She ran in her torn clothes, barefoot in the dark, with her father-in-law chasing her through the streets. Luckily, she managed to escape.

Back in the apartment in Istanbul, the golden bracelet seems to be more and more eye-catching as the story unfolds. It turns out to be the last battle of the failed marriage. The gold was given to Fatima as a wedding gift. Mohammad and his family want it back in return for divorcing her.

“My daughter’s future is broken. She is a child. I don’t know what to do now. If our situation doesn’t improve, my youngest daughters have to work too. I ask God to help us.” – Fatima’s mother

Before we leave, Fatima’s mother has a piece of advice she wants to share with mothers around the world: “No matter how bad your situation is, whether you are poor or from a family that doesn’t have anything, endure it! It’s not logical to let your daughter marry to make things easier for yourself. And especially a young girl at the age of 16. Your child.”

Fatima’s hands clearly show the traces of years of hard work. Her eyes look tired after telling her story and she is exhausted from the 13-hour shift at the sewing factory. She leaves us with these words: “At work, I feel like I’m an animal. I miss going to school.” 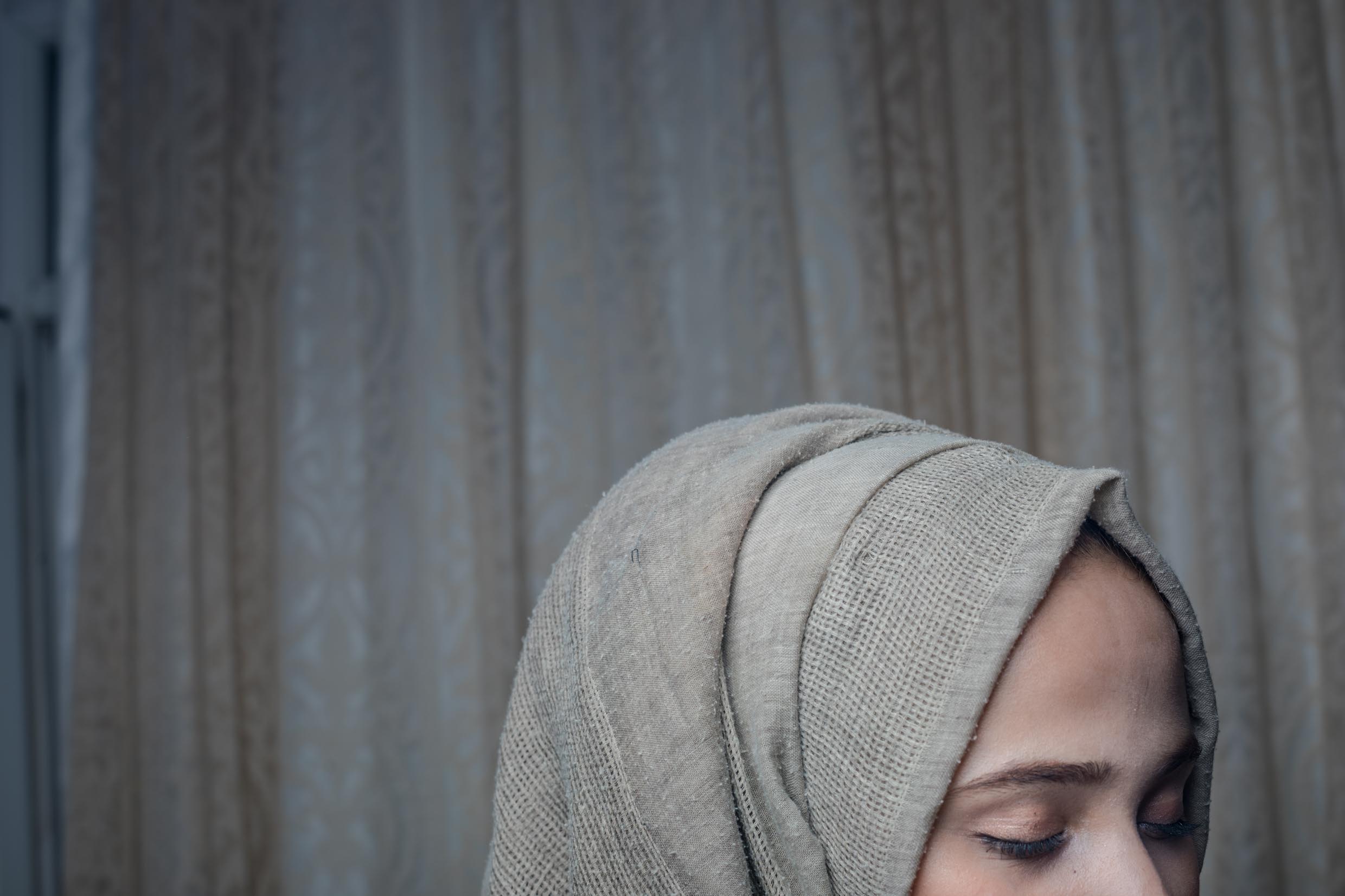 Fatima was married off at age 16 as a consequence of hunger and poverty, leaving her in an abusive relationship and despair. Her parents saw it as the last option for a better future for one of their daughters and as one less mouth to feed. Fatima now seems to be in an even worse situation, and her story is not uncommon.

At Refugee.Today we have interviewed and listened to several underaged girls, who have gone through continuous physical, psychological and sexual abuse as a consequence of child marriages.

The numbers of young Syrian girls getting married before turning 18 is continuously increasing in countries such as Turkey, Jordan and Lebanon. A report made by the Higher Population Council in Jordan lists several reasons why parents marry off their underage daughters: poverty, a need to be rid of the responsibility to protect the honor of girls and of the financial responsibility, and traditions and cultural reasons. Child marriages occurred in Syria before the war started in 2011, but the poverty and unsafe living conditions among Syrian refugees have led to an explosion in the amount of Syrian child brides.

The names used in this article are made up in order to protect the individuals. Refugee.Today is aware of their real identities.

The article is made with the support of DANIDA, The Ministry of Foreign Affairs of Denmark.

This entry by Ida Brink and Martin Thaulow originally appeared on Refugee.Today. A version of the article is published by The Turban Times with permission.

"We saw an opportunity to do something."