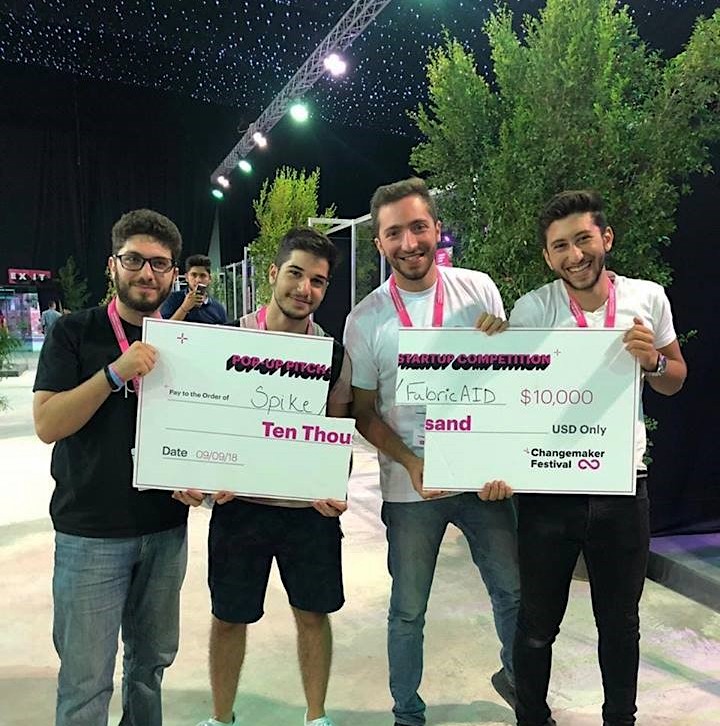 In a country where things no longer in use are usually seen piled up in the streets, FabricAID, a newcomer in the second-hand clothing industry in Lebanon, has successfully developed a new strategy to turn what some have thrown away into value for others.

Omar Itani and his team are ecstatic because they won. The Global Social Venture Competition is the largest competition in the world for social startup companies, and out of 550 companies representing more than 60 countries, Omar Itani’s startup took first place. What started out as a pile of 200kg of clothes brought him to this moment, at the young age of just 22.

It began in 2016. Wanting to donate clothes to underprivileged people, Itani managed to collect 200kg of clothes from his network. After researching the market, the idea became a reality: “The way the second-hand clothing industry has operated in Lebanon up to this point has in many ways been inefficient. We saw an opportunity to do something,” tells Omar Itani, and it was with this that FabricAID came to be in Beirut in July 2017.

While the company has just recently started setting up donation bins of its own across the city, most of the company’s clothing items are from other NGOs that collect and receive clothing donations. FabricAID offers to pay the NGOs for their collections as well as picking up the donations on location. “For every kilogram of clothes collected, we will pay. So the NGOs just need to collect to be paid by us. We handle all the sorting and distributing,” explains Itani.

This strategy has given FabricAID the opportunity to work with a wide variety of clothing collecting NGOs. In addition, it has allowed the company to offer a diverse assortment of items at its shops.

Once the clothes are collected, they are taken to FabricAID’s sorting facility. “We sort the clothes in more than 70 different categories according to age, gender, quality and type. Then we clean everything and do quality testing to make sure that the clothes we sell are not too worn out and can be used properly for at least 2-3 years,” Itani explains and continues:

“The items are then ready and we take them to our local vendors found in several different areas and refugee camps all over the country.”

These vendors are like thrift shops that operate as any other store. Here, people can come to buy, browse or try on what the shop has to offer. There are likewise sales assistants helping out and organizing the collections. Just like with other retailers, not everything is sold at the end of each season. These unsold items are combined with the clothes Itani and his team know from the onset will not sell in the communities within which they operate due to the style or being too worn down.

But these items are not merely discarded. FabricAID has joined together with other companies and initiatives to put them to use.

“One of the things we are doing with some of the clothes that we can’t use is cooperating with a company that is able to take some of the items and utilize the fabric and the textiles to make furniture,” Itani says.

FabricAID has also been involved with another program in which they have sponsored a training facility in a refugee camp. At this facility, local women get the opportunity to work in their own communities to resew and rework clothes that FabricAID has gathered. Part of this work is done together with fashion students and has later been brought to exhibitions and used at fashion shows as well.

Generally, after clothes have been reworked or simply sorted and cleaned, they are sold at prices ranging between $0.3 and a maximum of $2 per item.

We are FabricAID!
For more info visit our website www.fabricaid.me

“It doesn’t make sense if we sell our clothes at prices that people can’t afford. We ensure that clothes are affordable while at the same time making our model sustainable in the long run.”

This, however, begs the question of what charity is supposed to be. When people are willing to donate their clothes to NGOs for free there is an expectation among many that this ought to trickle all the way down to the underprivileged that are eventually supposed to receive the donations.

Omar Itani believes that this attitude is widespread, but in his experience it misses the target.

“People are not looking for a handout. So with us, it’s just like going to any other shop. The clothes are organized and we have sales assistants to help out with sizes and the likes. This way we guarantee access to affordable and decent clothing to people in a dignified manner. That is what we offer,” he says and continues:

“But it is important that we actually sell the clothes for this project to continue to work sustainably for us. I think the best way to show that this works is to look at how much we’ve actually sold since we started. We’ve sold a lot. People want to come to us.”

“We can’t wait for the government”

In recent years, circumstances have become more conducive in Lebanon for initiatives like Itani’s, and according to him, FabricAID is not alone in having undergone the process that it has.

Omar Itani sees FabricAID as part of a plethora of different companies, organizations and initiatives that have sprung up in recent years, where many of these have emerged as a response to the lack of government services on a wide range of areas, even essential ones.

Lebanon is a country that consists of a mix of companies that are private, public and somewhere in between. Lebanon’s private universities and some of the private hospitals have performed well even by international standards. Public services offered by the government, however, have for a long time stagnated in standard or declined. Within certain sectors like that of electricity and the water supply the situation has been close to total collapse more than once.

As a result, popular support and trust in public institutions have plummeted in the country. So there are plenty of problems to grapple with in the country, but at times people have to look far and wide for government intervention and fixes.

READ ALSO  No lid on the Lebanese garbage crisis

Omar Itani recognizes this from his own situation: “I believe that what we are working with at FabricAID has nationwide social relevance, yet it was not until we had done a tremendous amount of work and gotten everything up and running that we were able to partner with the government on some of our initiatives. So the hard work has to be done by civil society,” Itani explains and adds:

“But it is possible. I firmly believe that social enterprises like ours can be the way forward for Lebanon in solving many of the country’s problems.”

Itani sees an opportunity for private initiatives to set a good example for the country.

And with what he has seen, Omar Itani is hopeful for the future.

“I do believe that people generally have become more environmentally and socially aware, and that we are seeing people trying to deal with many of our country’s issues through private initiatives.”

He uses himself and his own group as an example:

“We took a chance and it worked out. I believe that social initiatives have a lot to contribute with, but it is up to people with ideas and means to make it happen. We can’t wait around for these problems to solve themselves and we can’t wait for the government.”

The best PR for a boycott of Israel

Israeli psychoanalyst Iris Hefets shares her thoughts on the boycott of Israel.