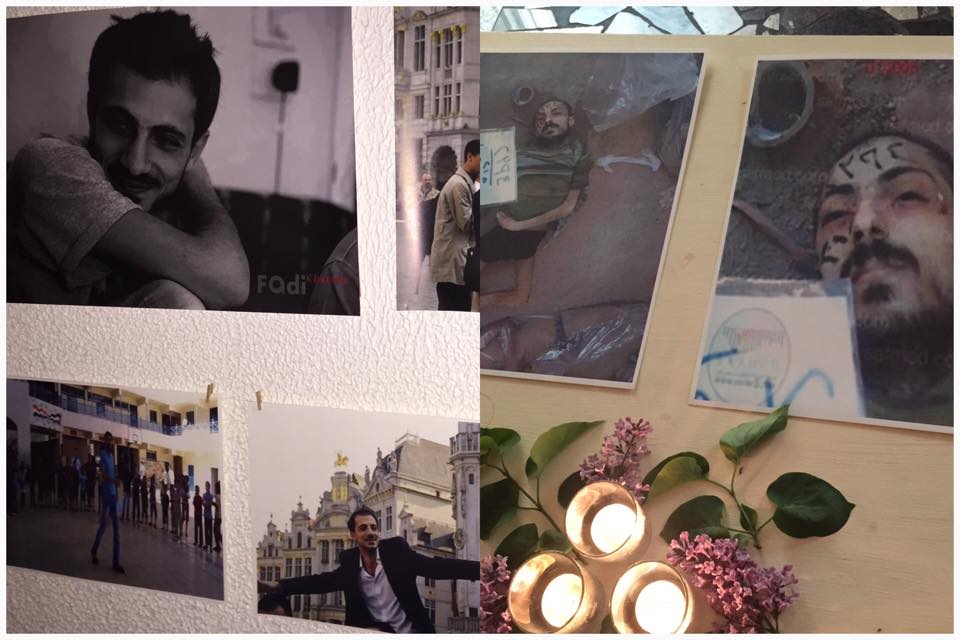 In May 2015, I visited a Copenhagen exhibition on the many victims of torture carried out by the Syrian regime since the war broke out.

Since then, at least 200,000 had been captured by the regime. With the help of a defector (called “Caesar”), 50,000 photos of dead prisoners were leaked, proving that at least 11,000 of the captured Syrians had been tortured to death in the prisons.

The images below were put on display at the exhibition, along with their personal stories written by their close friends who live in Denmark today; “I’ve seen the photos of Hamza’s (age 13) dead body. They had been using drills. It was so cruel. I chose not to show these pictures in this exhibition.”

More than 2,000 of Caesar’s photos of the torture victims are displayed on this website.

“I witnessed many atrocities: bodies like skeletons due to hunger, in which each body had a serial number … There are more than 100 thousand detainees still in al-Assad’s prison waiting to be saved”

“Khaled was 25 and had studied Economics at the University. He came from Yarmouk Camp and was a relief worker in a Jafra foundation for relief and development. People inside and outside Yarmouk Camp loved him. He was elected Camp Coordinator. He mentored children and youth. He smuggled medicine into field hospitals. He and other gathered baskets of food to support Homs Camp.

One of his friends remember Khaled always asking to deliver greetings from him to his brothers there. “Who are your brothers?” the friend asked. “Khaya (bro)” he replied, “all the people in Homs Camp are my brothers.”

Khaled was engaged and ways always wearing a green sweater that his fiancée liked. He also wears that green sweater in the photos taken in prison.”

“Mohamad al Khatib, whom we called “Abu Ibrahim – father of Ibrahim”, was in his forties and worked in auto parts. He was born in Yarmouk Camp into a family who originally came from Sepphoris in Nazareth district. Before the Syrian uprising he was active in Palestinian intellectual and school affairs, with a special interest in Palestinian literature and history. He was arrested in his apartment in Yarmouk, where he lived with his wife and a father for five children.

The only crime Ibrahim committed was organising food deliveries to the displacement centers that civilians had been setting up in mosques and United Nations schools.”

“Thamer al Sharai was only 15, a boy who felt that life was always smiling – and he could throw smiles back at it. He lived near Daraa, the first place where civilians dared to speak up about freedom – and then were besieged by Assad’s army.

When the citizens of Daraa were cut off from food supplies, people from nearby villages marched to Daraa, carrying bread and asking the soldiers to stop the siege. Thamer came with his family and friends, calling out again and again “Selmiah Selmiah (peaceful peaceful). The demonstrators were met by gunfire. Many were killed and others, like Thamer, were arrested. Six months later the regime brought his tortured dead body to his family. And he was not the only boy to die.

Hamza, who was only 13, got arrested in the same demonstration. His body was the first to be brought back to the family by the regime. I’ve seen the photos of Hamza’s dead body. They had been using drills. It was so cruel. I chose not to show these pictures in this exhibition.”

“Rehab was 22. She was from Homs, but she studied civil engineering in Aleppo. She was arrested for helping people with medical treatment in field hospitals set up by non-governmental organisations. People use the field hospitals because those run by the government or the army are dangerous places where you could be killed.

A friend of mine was killed when leaving the Gol Hospital in Damascus after having been treated for a hit on the back of his head. So Rehab helped in the field hospitals – and paid with her life for this big crime. “You are helping the terrorists”, said the regime.

“You, the most beautiful of all, the shining rose of all girls, Devia, Homsia, the martyr under torture“, said her friend Fatema Alomar.”

“Allah was in his thirties and came from Dumar in Damascus. He had a degree in Economics from the University, was the leader of a student league, and was always there if you needed something.

A calm, polite man who spoke with a very quiet tone, he spent most of his time teaching children values and morals, how to love and how to belong to their beloved country. “Manhood”, “Magnanimity”, “Dedication”, “Devotion” – these words describe Allaa.

The crime for which he died? Like Ibrahim, Khaled and rehab, he helped displaced people.”

“Hassan was a friend of Khaled. He was 28, married and the father of a little daughter when he got arrested in 2013 in Yarmouk. Yarmouk had been under siege for more than a year when the government said that anyone who wanted to leave Yarmouk could go out from “Bait Saheem”, an exit controlled by the Syrian army. Thousands of people chose to leave, including Hassan. But he and his wife and daughter got arrested on the way out.

Hassan’s wife and daughter were released after some time. They never saw Hassan again. Why? During the siege Hassan had been doing comedy shows about the situation. He was someone who could make jokes so fast you’d be shocked. He was always telling jokes, even about how people were living in Yarmouk during the siege, even about death. Hassan was also helping journalists from Al Jazeera and other media – with pictures after bombings and other information about what was going on. But he never spoke about that.

Instead he spoke of how, though his people came from Palestine, he considered himself Palestinian-Syrian. Ask him about Halawet Aljeben – sweets known in Hama and Homs – and he preferred those form Homs. Shawarma? That needed to come from a Damish Restaurant in Damascus. Theatre? Cinema? Same preference. He considered Syria his home.”