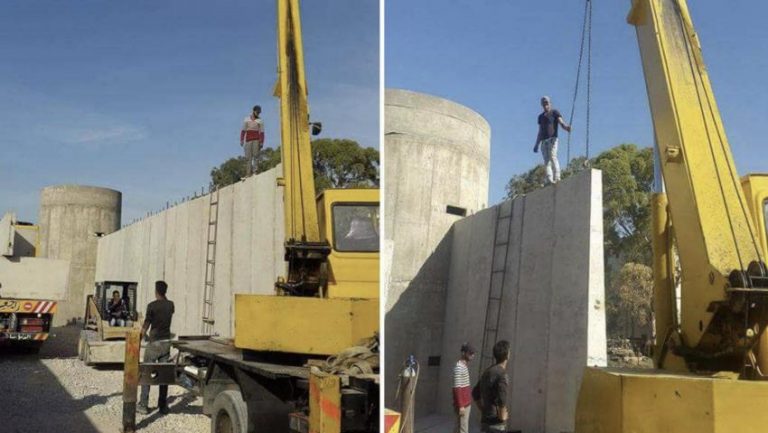 “Wall of Apartheid” to separate Palestinians from rest of Lebanon

Many are comparing it to the Israeli separation wall in the West Bank.

In the beginning of September this year, news emerged that Lebanese Security Forces were planning to build a wall surrounding the infamous Palestinian refugee camp Ain al-Helwe and its 70,000 inhabitants, located in the southern part of Lebanon. The aim was to prevent insurgents living in the camp to bypass the official checkpoints that are established at the entrances of the camp and run by the Lebanese Army.

Back then, the Director General of the Lebanese General Security, Abbas Ibrahim ensured that such plans were not in the making. Palestinian leaders also denounced the plans and stated that the news were pure rumors “aiming at destroying the bridges of trust that exists between the Lebanese and the Palestinians”.

Pictures on social media, however, has emerged during the weekend showing that construction work has indeed started to enclose the refugee camp from all sides and restricting movement to the official entrance/exits that already exists.

According to the Lebanese media station Al Jadeed who has spoken to military sources, the move has been coordinated with the leading Palestinian organizations that operate within the camp.

“The move came in order to preserve the security of both the camp and the neighboring areas” says Major General Subhi Abu Arab, who is leading the Palestinian joint security forces in the camp.

Syrian journalist Moussa al-Omar writes on Twitter: “Government of Lebanon has money to build an apartheid wall around Ain al-Helwe camp, but does not have money to remove the garbage in Beirut”:

Nevertheless, the wall is facing criticism on social media. Many are comparing the wall to the separation wall surrounding the West Bank. Leading comments have been emphasizing on the brotherhood relationship that exists between Palestinians and Lebanese and that “everyone should have equal access and right to free movement”.  On the other side, many Lebanese are praising the construction work as “the move will assist in preventing terrorists from slaughtering our soldiers”, referring to both the Nahr al-Bared clashes that took place in 2005 and the regular clashes between Lebanese security forces and insurgents with close affiliations to al-Qaida and other groups that exist inside Ain al-Helwe.

According to Abu Arab, the move has been planned for more than 10 years. No official statement has been issued by Lebanese authorities.

This story from Gaza lets the world know what loyalty and halal love look like.