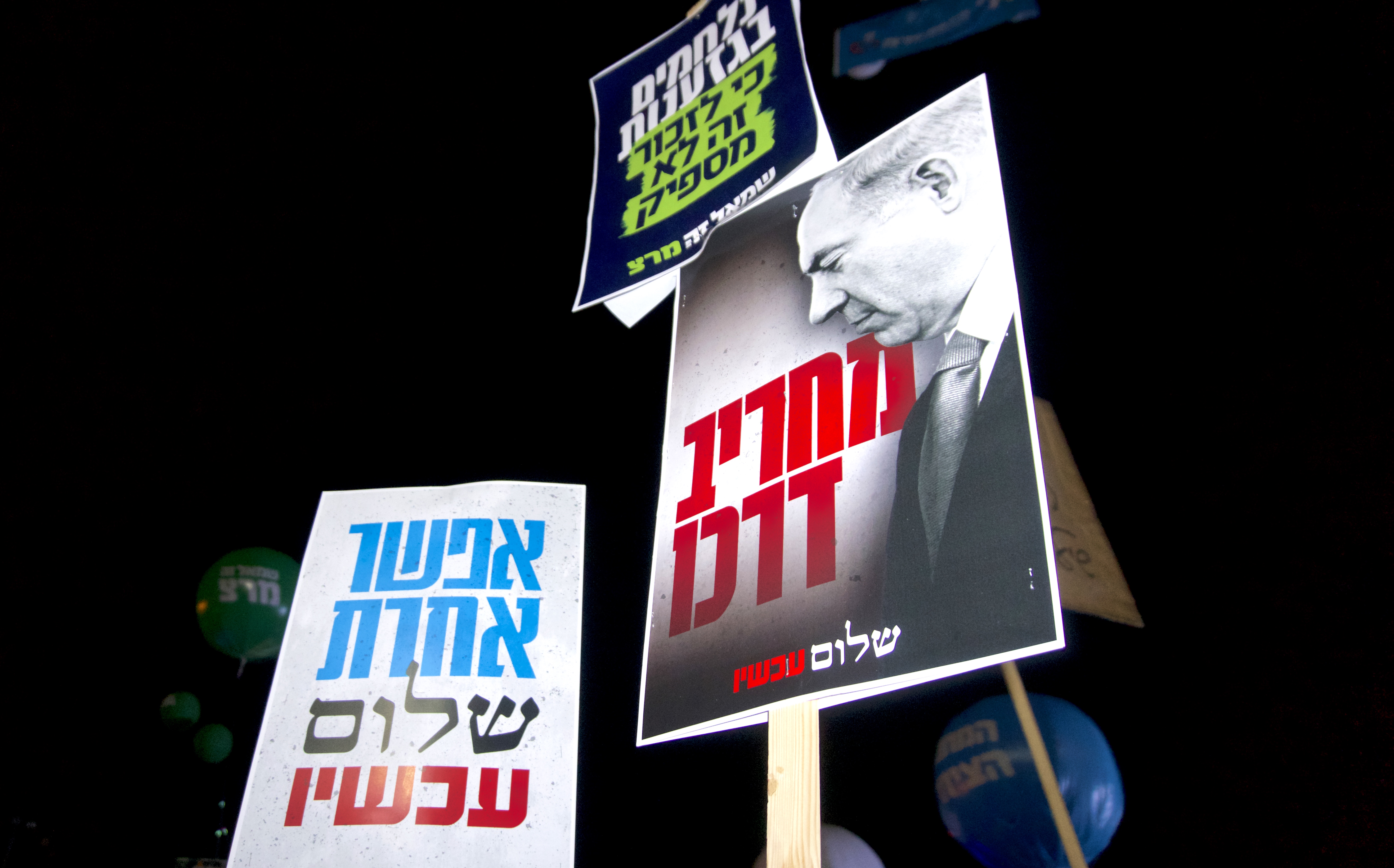 The myth and contradictions of Liberal Zionism

What few tend to ask is whether their vision of a “liberal” and “Zionist” Israel has ever been anything but a myth and contradiction.

Self-defined “liberal Zionists” are in the spotlight again after another round of soul-searching over the “one state solution.” Articles on this ideological self-flagellation usually take the form of people who claim to be supporters of Israel abroad worrying that their vision for the Jewish state has been sabotaged by the residents of the Jewish state. They have their allies in Israel as well. But what few tend to ask is whether their vision of a “liberal” and “Zionist” Israel has ever been anything but a myth and contradiction.

The latest spate of liberal Zionist heart-wrenching commentary includes a piece at The New York Times by Michelle Goldberg arguing, unsurprisingly, whether Israel practices “apartheid.” The column argues that as Israel slouches toward a “one state” solution, “it’s impossible to say how long Israel could sustain such a system. But the dream of liberal Zionism would be dead.” Raphael Magarik at The Forward also asserts that Liberal Zionists need BDS. “liberal Zionists legitimize themselves in the Jewish world by attacking and being attacked by the far left,” he claims. He argues that Liberal Zionists have leverage over Israel through the bogeyman of BDS. In a stunningly paternalistic argument, he claims “the Palestinians are weak and divided, Europe largely disengaged, the Arab world is selling out the Palestinians.” Only the left can thus save Israel from itself. “Fear of boycott is the only reason they [right wing Israelis] have to pay attention to their critics on the left.”

This narcissism is more about self-perception than reality. Many of those who define themselves as liberal Zionists have an internal contradiction encapsulated in the words they have chosen for their political philosophy. “Liberal,” which is sort of a way of saying “I’m a good person,” and “Zionism” which supports Jewish nationalism. They think being a liberal Zionist means being a “good Zionist.” In reality it doesn’t mean that.

What is “liberal Zionism” but “liberal nationalism”? You can’t fully be liberal and a nationalist since nationalism at its essence is discriminatory. That’s why author Tony Judt called Israel an “anachronism.” Liberal Zionism is predicated on the theory that there is a “good Zionism.” In this model Jews have a right to self-determination and to create a state, but they must be moral in how they rule over other people. The state should be one of justice and a light unto the nations. Liberal Zionism has much in common with manifest destiny, the concept that “we” are morally superior because we do good. When we do bad we are immoral.

The kulturkampf between Israel and liberal Zionism goes back to the foundations of the state. Israel is almost seventy years old and its administration of the West Bank is fifty years old. However the roots of the rose-colored glasses initially worn by liberal Zionists relate to the differing interpretations about the nature of the state and its founders. Israel was carved out of the Middle East by practical Zionists, not liberals. Their roots were primarily in eastern Europe and the region that became the Soviet Union. Their solutions to challenges were rugged, necessary and often brutal. Left to liberal Zionists there would have been none of the gun-running and gunslinging necessary for the state. Anyone who reads about the harsh realities of the 1950s, raids and counter-raids, hundreds killed in largely unrecorded battles with Palestinian former residents of the land, cannot but ask what was liberal in all this. The steel and will of those who made difficult decisions in the 1950s was the steel and will of those in the Soviet Union and eastern Europe, not of the bourgeoisie sensibilities of America. At its soul then liberal Zionism has largely been a cultural struggle for the imagined soul of Israel.

For the founders of the state who styled themselves nationalists and socialists, it was convenient to play on the myths and imaginations of liberal Zionism when talking to the diaspora. Here was an “egalitarian” state they said; one of “social justice.” Nikita Khrushchev and Fidel Castro said the same about their states. For Israel, liberal Zionism was a selling point abroad. Inside the borders there was no liberal Zionism. There’s nothing “liberal” about segregating schools by ethnicity and religion. There’s nothing liberal about “enhanced interrogation” or “administrative detention” or the “state of emergency” Israel has lived under since its founding.

The problem is that this mythical Israel never meshed with reality. There is no liberal Israel to fall out of love with, because there never was a purely good and utopian state of Israel. In its politics and behavior Israel has tended towards illiberalism. When someone writes about the “dream” of one Zionism slowly evaporating, when was this dream ever conjured up? In the 1950s, when Arabs in Israel lived under curfews and military government? From 1949 to 1966 Arabs in Israel suffered harsh discrimination. In the Negev beduin were kept on a kind of reservation and pushed off lands they had been living on. Researchers have compared this treatment to how Australia or the US treated indigenous people. What’s “liberal” about that? Israel also created a segregated education system in the 1950s, one school system for the Arab minority, and several Jewish systems for the majority. Is this liberal, or is it kind of like the 1950s US South? Israel’s behavior in the 1950s was like other European countries, whether the French in Algeria or the British in Northern Ireland, it employed similar methods. Images of the US in Vietnam or the British in Yemen would not have been foreign to Israel’s commanders in the 1960s. But there’s nothing liberal to be found in this.

Did the mythical Israel emerge in 1967? Well, no. That is the year zero of the occupation. When people write about “apartheid” when do they think the “apartheid” began? In 1967 or in the 1990s? Well, if it began in 1967, then that means that this concept of “we are losing the two state solution” is a misnomer. There never was a real two-state solution. Even on its most basic issues, such as Jerusalem or refugee issues, the two-state solution was always more about paying lip service to something, than having two states. It was a figment of the brief post-Cold War optimism of the 1990s. Western policymakers bought into it because they thought democratization and neoliberalism was about the sweep over the world. The 2000s has shown us that this is not going to happen. Former ambassador Dan Kurtzer has correctly written recently at Haaretz that “America can’t save the two state solution.” Exactly. It can’t be saved. Only Israelis and Palestinians can save it and they don’t seem to care much about it.

The never ending hosannas for the liberal Israel of old and chorus of tragedies about Israel today are a necessary fiction for those who refuse to accept a mature rendering of the state’s history. The same liberal Zionist voices who keep berating Israel with stories of “apartheid” and “BDS” can have a mature discussion about any other country in the world besides Israel. There is no counterpart of “liberal Zionism” for the US or Ireland or the UK or France, Iran, China or Uganda. There aren’t still Italians from the “liberal” wing of the risorgimento or La Giovine Italia, the Italian nationalist movement to reunify Italy in the 19th century which certainly influenced Zionism. Italy was reunited and Italian political parties emerged. Maybe Italy today is less or more liberal than some envisioned it. In Israel there is an existing left that exists but “liberal Zionists” eschew the dirty politics of choosing Labor, Meretz or Hadash.

Zionism is a state ideology that transcends the state, which is why it is burdened with the myths of liberal Zionism. It’s like discussing modern day Turkey in light of Kemalism, the state ideology of the founding of modern Turkey which has many commonalities with Zionism. Except there are not “liberal Kemalists,” there are liberal democrats in Turkey. It would be better for liberal Zionists to stop the charade of the janus-faced ideology and simply become liberal democrats in Israel or become nation-state supporters. You can be on the political left in Israel, but you can’t be a liberal Zionist, except in the realm of myth.

Seth J. Frantzman is The Jerusalem Post’s op-ed editor. He has covered the war on Islamic State in Iraq and reported from Turkey, Jordan, Egypt, west Africa and Eastern Europe.

This entry by Seth Frantzman originally appeared on Medium. A version of the article is published by The Turban Times with permission.

The views expressed in this opinion are the writer’s only and do not necessarily represent those of The Turban Times.

The Dwarfs of East Agouza

Video interview with the experimental Egyptian freejazz and noise band.