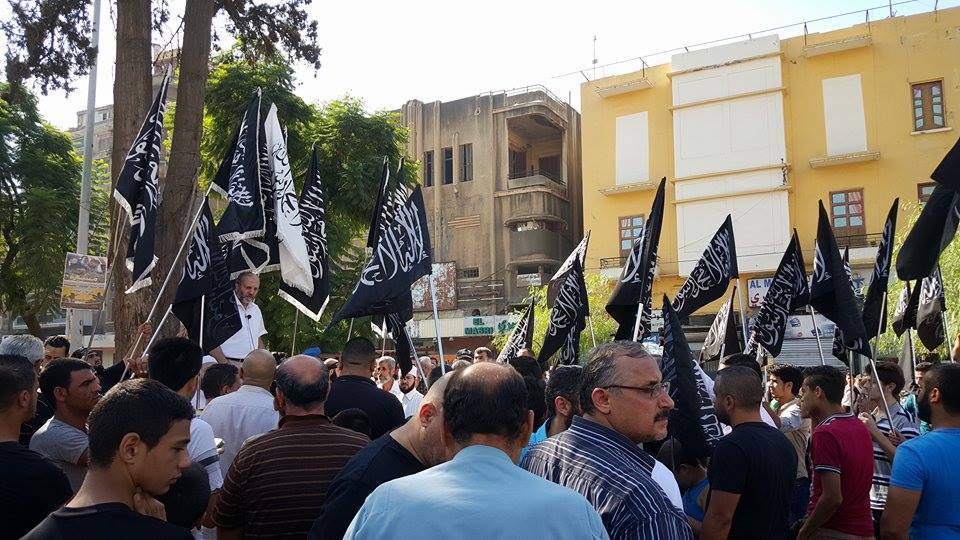 Walking through the city centre of downtown Tripoli in ‪Lebanon,‬ I noticed a huge gathering of people marching down the streets, chanting Islamic slogans, carrying with them black and white ‘shahada flags’, and as they marched through the streets they caught not only my attention but everyone else’s.

Shop owners, street workers, random people passing by, all were starring at the protesting men. Confused about who they were – considering the troubled history of all the different groups and sects of this country – I asked one of the guys standing the next to me which group these men belonged to; “Why not go ask them, man!”.

But as I looked at the waving banners a second time, I quickly came to realise who the demonstrators were – they were the Hizb ut-Tahrir, the Lebanon Branch, and they were protesting against the recent Russian interference in the Syrian conflict.

Hizb ut-Tahrir is a pan-Islamic political party, dedicated to the recreation of a caliphate. An unique characteristic of theirs is their method of non-violence – namely ‘persuasion’, demonstrations and missionary and political work – means through which they aim to (re)build an Islamic nation.

The party is banned in all Arab countries but three – United Arab Emirates, Lebanon and Yemen. Here in Lebanon, most of their support typically is to be found in the Sunni areas around Tripoli, in Sidon and in some Palestinian Refugee Camps (hereof Ain Al-Helweh Camp among others).

Hizb ut-Tahrirs long-term strategy for their appointed goal of recreating a global caliphate is by winning over the elite of the society, in turn creating an up-to-down transformational effect to the society they are trying to turn. But at the same time also focusing on passing the idea of global pan-Islamic unity to their followers.

The group itself is not seen as a direct ‘threat’ to regional or global stability, much helped by their non-violent way of work. For the moment, Hizb ut-Tahrir are putting their emphasis on propagating their message of global pan-Islamic unity to their own members and to any who hear its message.

All of this in the hope that they, the future generations, will create an unstoppable rippling effect that will make the dream of a global Islamic caliphate come true.