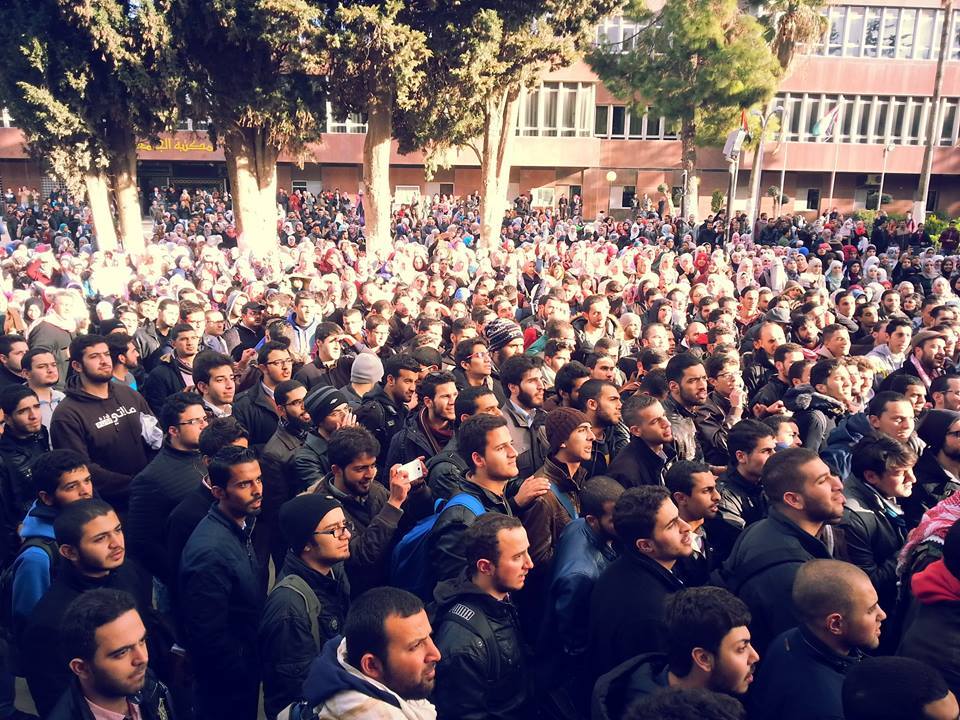 Side of the protests arranged by the "Student Rally for the Cancellation of Tuition Fee Hikes!" via student rally Facebook group

The student revolution of the University of Jordan

“This is a student revolution in the happening, my friend!”

As a student at the University of Jordan, in the city of Amman, I got used to seeing the large groups of students standing in front of the administration building on my way home from class. What I did not know though, was the reason for all the spectacle and fuss.

As a Danish student and a stranger to the system of the university, I found it at first very daunting to go out and investigate.

As the weeks passed, my interest got the better of me and I took out to the university library after a day of classes and asked one of the attending speakers after he had delivered his speech:

He answered me in a serious but proud manner: “This is a student revolution in the happening, my friend!”

In Jordan, the university system is first and foremost large, but also expensive. The country has 29 separate universities, 10 of them being public universities and 19 of them private institutions.

To enter a university a student must have a so called ‘general secondary education certificate’ (a certificate that proves that the student has finished high school) and the required marks to be enrolled into a university.

The cost of going to universities vary a lot according to the different majors, but can run up to the hundreds of dinars for each credit hour of studies at the university. At the undergraduate level, a full bachelor’s degree requires between 126-257 credit hours and around 4 to 6 years to attain. Each credit hour can cost from 40 USD to 300 USD, with the highest prices being at the post-graduate stage.

Since 2002, Jordanian Universities set in place a new system, the so called ‘Muazi’ parallel program, which meant that students who were not able to enter the university by the regular program, with its default prices and its competition and grades based enrollment, were now able to do so, though at increased prices, sometimes reaching double or triple the regular admission rates.

Students criticized the system, calling it a way to commercialize the universities. The consequences, the students argued, were that several majors had become more expensive, seeing that the University eyed an opportunity for profit and they estimated that students enrolled in the parallel-program manner now accounted for 30 to 60 percent of all the seats in the 10 public universities of Jordan.

With the ‘Muazzi’-system set and the regular-enrollment prices in place, many where dissatisfied but still not in anger and uproar as they were in front of the administration building of the University of Jordan in late February 2014.

This happened when the University decided to do one thing in June 2014: The University raised the tuition prices for the parallel program credit hours, the most popular ones being hit the hardest.

This resulted in price increases that could range from a 30 to over 100 percent increase. The price of each creditable hour of education when studying at a PhD program, for example, would then increase from around 110 USD to 250 USD.

What followed was that in September 2014, several student unions at the university decided to take it upon themselves to protest these increases in tuition fees and create a union between themselves to do so. What came out of it was the “Student Rally for the Cancellation of Tuition Fee Hikes”

The impressive thing with this new assembly was not that the students had decided to take it upon themselves to protest and demonstrate. That they had done before, but this assembly had resulted in the representation of students from all ideological, political and tribal backgrounds: both Islamic, communists and secularists were all a part of this new movement.

This movement would later evolve into something else, a month long sit-in and daily demonstrations that gathered both students and non-students, from all backgrounds, culturally and ideologically, open to all. They called them “The Open Demonstrations”.

This was a whole year and a half after the creation of the “Student Rally for the Cancellation of Tuition Fee Hikes” following the lack of response from the university, the students decided that a sit-in, each and every single day, from 3PM to 8AM would be put in place.

Specifically timing it so the students themselves were able to study and go to their classes and not disturb other students.

This sit-in would be called the ‘Open-Demonstration’ as a sign of its inclusiveness and was established on Sunday, the 28th of February 2016.

Accusations against the students

Interviewing one student under the sit-in, he claimed that tabloid media and university officials had been slandering the movement and the participants calling them drunks, drug-users and rioters on TV and in tabloid-media.

The former president of the university, Ekhleif Tarawneh, argued in a press conference, as students were protesting, that this system was set in place to off-set the deficit by the students entering education from the regular program and the lack of government funding.

Tarawneh also accused the students of having a political agenda with the protests at a press conference following several weeks of unending protesting by the students.

Students responded to these statements by criticizing the alleged privatization of the public universities and the commercializing of campuses as several restaurant chains such as Burger King and Papa Johns had opened at campus.

Tarawneh was removed from his presidency as The Higher Education Council took the decision not to renew his term a second time Tuesday the 15th of March.

Twitter video of the students celebrating the success of the 19 day sit-in against fee increases:

Students at University of #Jordan celebrating right now after the success of a 19day sit in against fee increases pic.twitter.com/mR2IQvdFun

With the amount of students protesting increasing each and every week, and the sit-in being enacted each and single day, pressure mounted on the administration and the now former president of the University of Jordan.

What resulted was that in 18th of March, 2016, 19 days after the start of the ‘Open Demonstrations’ the University agreed to the demands of the students and agreed to remove the increases in tuition fees gradually. 50 percent this year, and the remaining 50 percent over the next two years, with a 25 percent drop each year.

Since the university decided to raise prices three years ago, over 30 demonstrations had been held and several weeks of sit-ins and sleep-ins had been done.

Keeping a keen eye on the administration the students promised that if an agreement was not fully materialized they reserved the right to resume their demonstrations.

What they had shown though, to the administration and the university, and to students all around the world, is that through will and determination and through open, continuous demonstrations and pressure, they could go against the most ruthless slandering and opposition, and still come out on top.

The students of Jordan can from now on, surely, be regarded as a force to be reckoned with in university politics and will in the future be given a lot of thought before any altering of the state of the students happen, for the greater good of the individual student.

While the politicians fail to agree, young Lebanese seem to have reached an overwhelming consensus: politics is a mess.