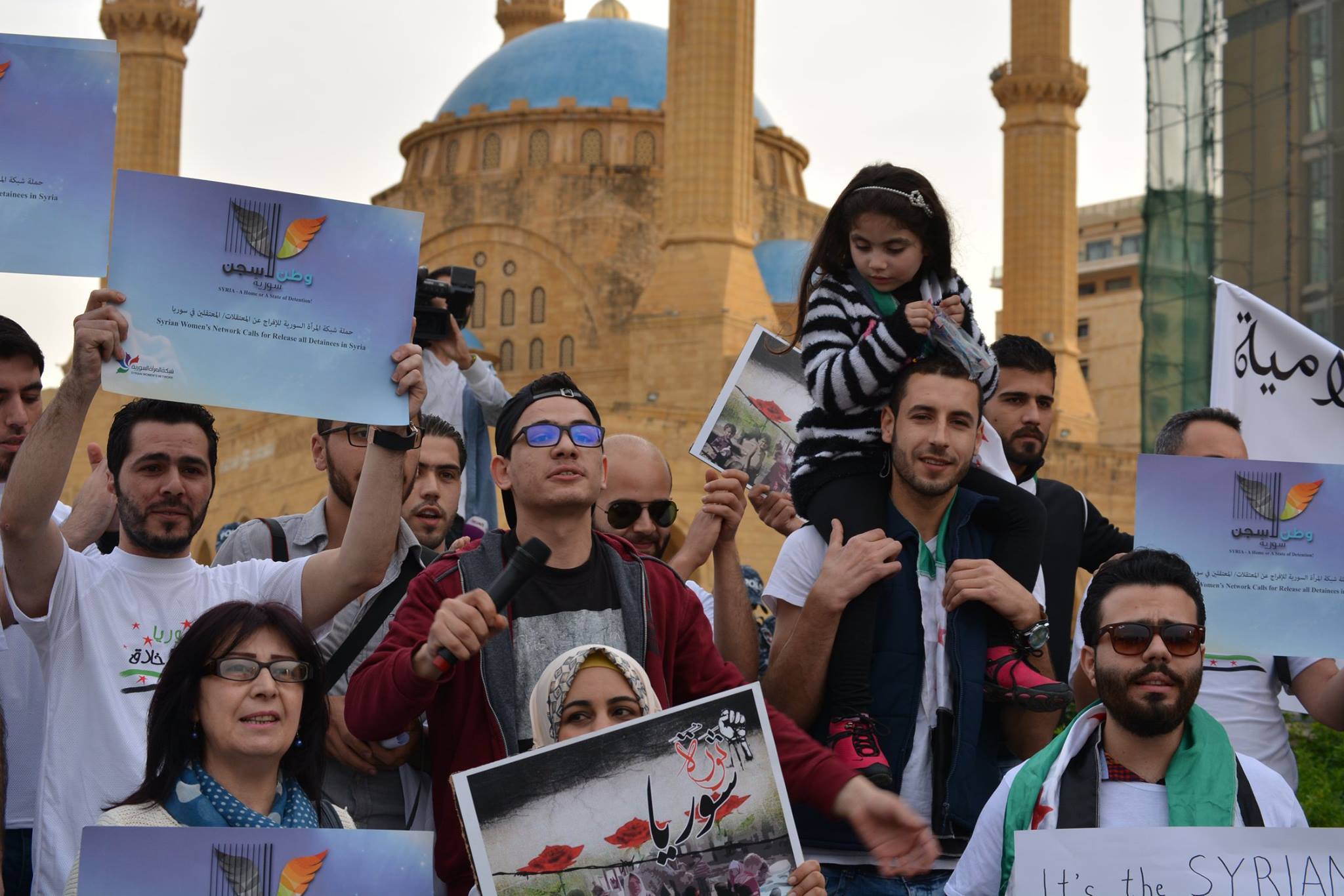 5th anniversary for the Syrian Revolution. Photo by Leila Talhouk

Whether they demonstrate against refugee policies, complain about poor waste management or just observe it all passively, youth in Lebanon have one thing in common: They are fed up with politics, and all they want is something new.

As I was jogging in the center of Beirut last week, I passed by a demonstration. Not a large one. I assume there were only around hundred people, who had gathered in the Martyrs Square between the lanes of the main road. A few had started dancing and singing songs of revolution. However, the majority of the demonstrators stood with their feet, steadily planted on the concrete with their faces turned towards the police officers in army colored uniforms, who had raised their weapons, ready to attack or defend if need be.

When I got closer, I stopped running. “Can you tell me, what this is all about?” I asked two girls, who were watching the scene from the sidewalk. The girls, both students, told me the demonstrators belonged to various groups within the university environment: the secular club at the American University of Beirut, some leftists and some feminist movements.

They were all against the Syrian regime and the Lebanese government’s approach to the Syrian war. They demanded better rights for refugees and complained over the recent political reforms, which they believed deprived refugees of their basic rights.

In 2015, a new migration law was enacted by the Lebanese Cabinet to reduce the flow of refugees. The requirements for a residence permit were raised, causing more people to be rejected at the border, and more people to have difficulties getting their documents renewed.

A residence permit now costs 200 dollars to renew, an amount hardly affordable for those who are stuck at the periphery of the labor market, making their living in the informal sector or from low paid, part time jobs.

Without a permit you risk being arrested and in worst case deported. The fear of arrestment has led many refugees to restrain from registering their newborns, and the United Nations estimates that 70% of children born to refugees in Lebanon are stateless.

One of the two girls next to me had a Syrian parent. When asked why they did not take part in the demonstration, she told me she agreed with the demonstrators for a great part, but found it difficult to take a stand.

The question of Syrian refugees in Lebanon is too complex. And the political debate is characterized by contrasts and generalizations, she said. “If you try to be nuanced, you impose yourself to the risk of being misunderstood.”

This was not the first time I heard such an argument. In fact, this kind of well-reflected despondency has been symptomatic for the youths I have spoken to, during my stay in Lebanon.

While the politicians fail to agree, young Lebanese seem to have reached an overwhelming consensus: politics is a mess.

And the refugee crisis is only one of many subjects that can cause young people to synchronically shake their heads. Lebanon is in a state of political paralysis. Since 2014, the country has been without a president, and the prospects of an election are still uncertain.

Since last summer, garbage has been piling up across the country due to dysfunctional waste management. The open junk yards in the suburbs of Beirut can be smelled throughout the entire city center. The garbage situation has led to the creation of a campaign called “You Stink”, which has been going on since August, driving people in the streets to protest for days. However, ‘You Stink’ is more than a reaction to the waste management. It is a statement of general frustration; that politics is just as disgusting as the garbage in the streets.

The other girl next to me had taken part in a ‘You Stink’ demonstration a few days before, she told me. It did not reach the scale of the ones in August, where thousands gathered in front of the parliament. Moreover, it was a lot quieter.

The demonstrations in August started out peacefully and then were interrupted by riots, which led the police and soldiers to respond with tear gas and water cannons.

Suddenly, our conversation was interrupted. A man came running down the street, towards the demonstration raising a stick, screaming pro Assad slogans. The demonstrators stopped singing and looked at him; a journalist turned his camera and filmed how the man tried to fight his way out of the police officerse grip. “It breaks my heart to see”, said the girl, whose parent was Syrian. “You see, this is the definition of the political stage in Lebanon today. Contrast, colliding against each other.”

The police officers escorted the man into an alley, where he was arrested. The journalist followed with his camera. I did too with the smartphone camera, after the girls had assured me it was safe. It all took place within a few meters from where we stood, and the fact that we were able to stand there with our cameras without the police or the disruptor noticing, added a sense of optimism to the otherwise depressing scene. The girls agreed.

The political system is in gridlock, but at least the freedom of expression still exists to an extent where you can protest in the streets.

Depriving girls of their childhood – the worrying reality of Yemen

It’s not something that has caught our attention, but it really should.