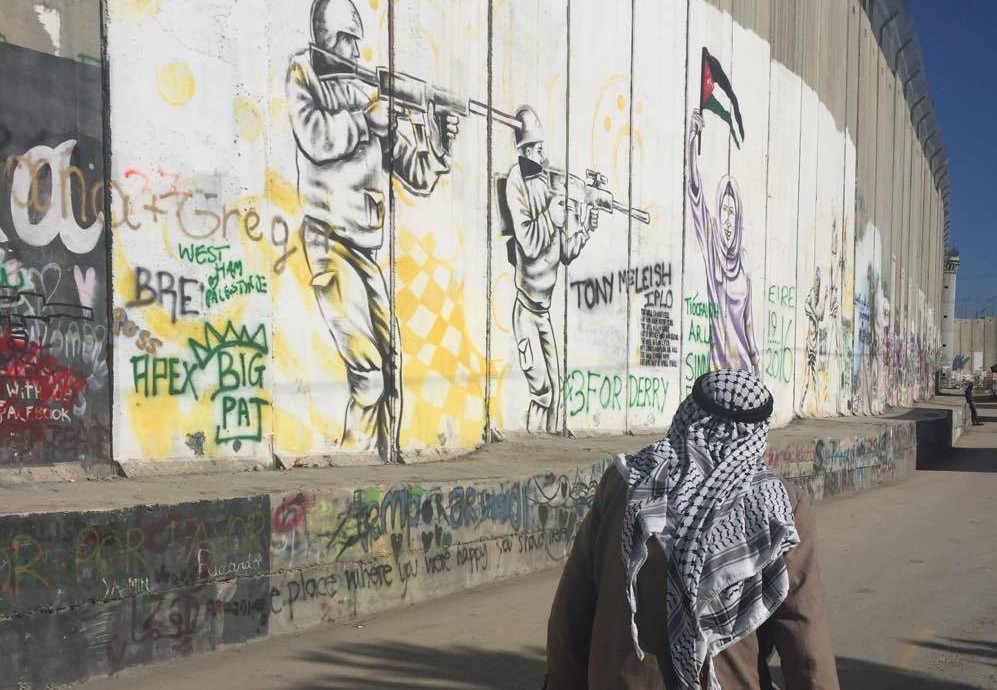 Israel, Palestine, and the reality I didn’t know

The Israel-Palestine conflict has been existing for many decades now and has always been a discussed topic. I myself had my presumed expectations about how the situation would be like when I first got off the plane, in Ben Gurion Airport.

I have an Arabic background, so I sort of grew up with Al-Jazeera playing in the background all the time, reporting about the Gaza Strip. I thought that I knew almost everything about the conflict and somehow had the idea that things could only be better than I imagined it to be, once I would arrive to the area. But I was wrong.

The feeling I had when I first saw the streets of Palestine, was almost inexplicable. I felt like I had taken a time machine instead of an airplane, which had brought me to the streets of WW2. There were soldiers everywhere. Some of them were dressed like ninjas; They were all covered up and only their eyes were shown.

My first encounter with the occupation was the “Checkpoint 300” in Bethlehem. Here, I saw a huge line of Palestinians standing and waiting their turn to be allowed passage through the checkpoint so they could go to work. Before they get permission to pass, they have to show their ID’s and get checked by Israeli soldiers. I could see by their faces that they were tired and exhausted. Some of them were very old and could barely stand on their feet. Every day they have to get up as early as 4AM in order to make it to work on time, because of the long waiting at the checkpoints. Israelis don’t have to go through this – only Palestinians have to.

Since the 90’s, Israel has created approximately 500 checkpoints. In every checkpoint there are several Israeli soldiers who checks the Palestinians and sometimes prevents them from getting through and around Palestinian and Israeli areas, as they wish. They were established with the claim of protecting Israel and Israeli settlements. At these checkpoints, Palestinians experience daily harassment, discrimination, racism, intimidation, humiliation and violent interrogations.

With my Danish passport, I could easily just go right through the checkpoint. I got on the other side and for the first time I saw the streets of the “Holy City of Bethlehem”. It was beautiful. But when I looked behind me and could see the long line of people waiting to get through, I suddenly felt this wave of shame; Shame of being able to pass right through without further complications. My heart dropped for a second and I just stood there feeling angry and furious, when suddenly a man came up to me; “Do you need a taxi?” he asked.

While I was sitting in the taxi, my hands were still shaking due to the 6-hour long, distressing interrogation I had to go through at the Israeli airport. I looked out of the window and I could see the 700 kilometres long separation barrier surrounding the West Bank (and also cutting out and separating 9,4% from the territory) . There were amazing drawings on it. One of them especially dragged my attention; It was a drawing of a little girl wearing a pink dress who was searching a soldier standing with his hands against the wall.

In those seconds, I realized that this trip would probably change my life forever.

During my trip, I met this amazing little boy, only 14 years old. The first thing I noticed was that he had a hard time smiling. I tried to make him laugh, but nothing happened. It was like he wanted to smile, but couldn’t. I later found out that this little boy had been through things not even an adult could have handled.

He had been arrested for three months for throwing stones. He was in school when the Israeli soldiers came for him. He kept telling them that he didn’t do it and that it wasn’t him, but they didn’t believe him. They took him away and in that moment, they didn’t only take away his freedom from him, but his childish innocence, smile and happiness as well.

According to B’Tselem – the Israeli Information Center for Human Rights in the Occupied Territories – there were, in the end of February 2016, around 438 Palestinian children under the age of 18 being held in Israeli prisons. In the prison, the children experience torture, sexual harassment, mistreatment and lack of medical care.

A lot of the things I experienced here had a strong impact on me, but one in particular really dragged my attention and made me furious. When I attended the annual Palestine Marathon in Betlehem – Right to Movement, Israeli settlers tried to ruin the marathon by throwing trash and stuff on the running track. The Palestinian police weren’t allowed to do anything to stop it. If an Israeli settler does anything towards the Palestinians, the Palestinian police have to wait for the Israeli soldiers or police to come. But this does not apply the other way around.

When I was in Hebron/Al-Khalil, also called “Ghost Town”, I saw streets where Palestinians weren’t allowed to go. I felt like I was in the documentary movies my teacher used to show us in history class about apartheid in South Africa. This was exactly the same, just a different country and a different time.

I looked into the eyes of the children and I couldn’t find the gleam which usually appears when small children smile. Instead I saw pain, anger and exhaustion. But in between all that, I could still see a little ray of hope shining out and this inspired and touched my heart the most.

Despite their extreme living conditions, the Palestinians still manage to hold on, never give up and keep on fighting and believing, with only having the gleam of hope as a weapon.

A wave of questions and thoughts about humanity went through my head on the airplane back home to Denmark. When I look back in history, I feel a kind of shame; Shame of how ‘idiotic’ human beings actually can be and allow themselves to be; Shame of how keep turning our backs to injustice cases, like the Palestinian one, and pretend like nothing is happening.

How will my life be like when I return home, after seeing these human beings suffer in this way? How? Will I just go back to my normal life dealing with my everyday problems as usual? At that moment, it was like I could hear my heart telling my brain; most highly not.

This trip has marked me for life, it changed me. Perhaps I would have felt better, if I had just looked the other way, but that would be the biggest mistake I could ever have done. This is the reality and we have to face it. We have to strive as much as we can to change it – because we can and because it is our duty.