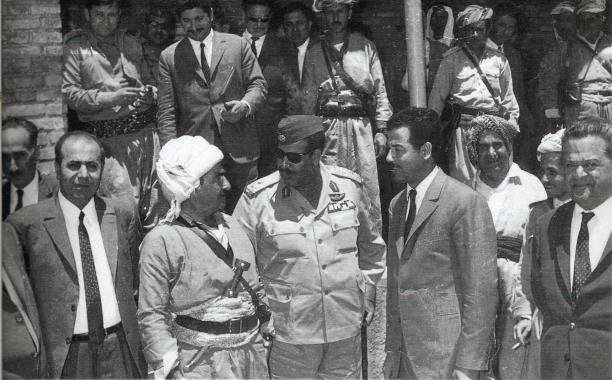 Photo of Saddam Hussein and Masoud Barzani meeting on 10 March 1970, before the signing of the Iraqi-Kurdish Autonomy Agreement of 1970 on 11 March. Photo: Via Wikimedia Commons, in public domain

Thousands of Kurds were killed and another 100,000 were forced to flee from Saddam after Iran, US, and Israel withdrew their support.

“We must openly call for the establishment of a Kurdish state that separates Iran from Turkey, one which will be friendly towards Israel.”

These are the words of Israeli Justice Minister Ayelet Shaked spoken to the Israeli newspaper, Times of Israel.

The relationship between the Kurds and what would later become the State of Israel goes back many years.

In 1931, Reuven Shiloah – who would later become the first Director of the national intelligence agency of Israel, Mossad – went to Iraqi Kurdistan to get an image of how the conditions were for the Jews in the area.

In the 1960’s, Israel trained the Iraqi-Kurdish guerrillas, The Peshmerga, with the aim of putting pressure on the common enemy in Baghdad.

Furthermore, the Iraqi-Kurdish leader, Mullah Mustafa Barzanî, helped Jews out of Iraq and in to Israel. Barzanî’s relationship with Israel goes, according to David McDowall, author and expert on the Kurds, back to the year of 1965.

The Israelis helped Barzanî to his victory against the Iraqi army on the mountain of Hindirîn in May 1966.

In June 1967, the Six-Day War broke out between Israel and the Arab states of Egypt, Jordan, and Syria. The Jordanian army was backed by Iraqi soldiers. Though in the same time, Barzanî were attacking Iraqi military posts in Iraq leading thereby to a distraction from the Israeli front.

Barzanî himself visited Israel in September 1967 and met with the Israeli Defense Minister, Moshe Dayan. Barzanî’s representative in Europe, Kamuran Bedirxan, had established contact with Israel in advance.

During this period, according to McDowall, Barzanî received 50,000 USD in financial support from Israel in his fight against the Iraqi regime.

The year after, in 1968, Iraq went through a coup, making Saddam Hussein, who would later become the infamous dictator, Vice President.

Hussein made it clear to the Kurds, that the government in Baghdad was seeking to obtain a permanent peace with the large minority. He then went to Kurdistan and told Barzanî that he would not return to Baghdad until he had received the wishes of the Kurds. These wishes were subsequently formed into an agreement on May 11, 1970, which promised the Kurds autonomy, and ended the armed Kurdish revolt. According to the agreement made; Kurdish and Arabic were to become the two official languages of Kurdistan; Kurdish participation in the government would become complete; officials in Kurdistan needed to be Kurds themselves or Kurdish speaking; and the Vice President had to be a Kurd.

The Kurds resumed their revolt against Iraq – supported by Israel

The March 11 Agreement was to become undermined. The reasons for this were several, some of them being that the Iraqi government didn’t accept the Kurd’s nominee for the Vice President position, Habib Karim, with the reason being that he, according to the regime, was in fact Iranian and not Iraqi. But Karim was a Feyli Kurd, whose history is believed to track back to Iranian Kurdistan. Furthermore, there were attempts at assassinating Barzanî and his son, Idris, which the regime was allegedly responsible for. Last but not least, the Kurds were dissatisfied with the government’s Arabization-policy in Kirkuk, Khanaqin, and Shingal, which resulted in the Kurds being driven away from the areas only to be replaced by Arabs from South Iraq instead.

Barzanî and the Peshmerga subsequently resumed their revolt against the government of Baghdad. This time, the Kurds were supported with money and weaponries from Israel and the US, in addition to combat troops from Iran. The US, Iran, and Israel also helped Barzanî with the creation of the intelligence service – Parastin. The reason for their support to the Kurds?

Iran was in the middle of a conflict with Iraq over the border between the two countries by the Shatt ul-Arab river. The Iranian Mohammad Pahlavi Shah believed that Iraq unlawfully reigned over what actually belonged to Iran. Furthermore, Iran feared the Soviet’s growing influence in Iraq, who later was to become an ally of the superpower in the Middle East. By supporting the Iraqi Kurds and thereby making them reliant on himself, the Shah would now be able to make demands of them: The Kurdish-Iranian Peshmerga, PDFKI, who had been attacking Iran, was hiding in Iraqi Kurdistan. In return for helping the Iraqi Kurds, the Shah demanded that Barzanî put an end to PDKI’s activities in Iraqi Kurdistan and hand over some of their activists to Iran. Barzanî accepted.

Israel supported the Kurds partly as a counterweight to Soviet’s influence in Iraq but also to distract the Iraqi army. During the Yom Kippur War in October 1973, in which Syria and Egypt were attacking Israel, only one Iraqi unit was able to participate in the Arab-Israeli war. The rest of the Iraqi units were busy fighting Barzanî in Iraq. The Kurds attacked Iraqi soldiers on Israeli demand.

The US and Secretary of State Henry Kissinger wanted to do their ally, the Shah of Iran, a favor by supporting Iraq’s opponents – i.e. the Kurds. Furthermore, the US was also worried of the Soviet’s role in Iraq. In addition, they were supposedly promised oil of Barzanî as well; the Kurdish areas of Iraq were rich on oil. And last but not least, Kissinger wanted to support their close ally, Israel. If the Kurds attacked Iraq, the latter would have fewer resources to attack Israel with, during the Yom Kippur War.

The Algiers Agreement: Israel, Iran, and the US withdraws their support

In 1975, Saddam came to the realization that parts of the Iraqi territory by the Shatt ul-Arab border demarcation had to be given to Iran in order to prevent further Iranian support of the Iraqi Kurds. “If we don’t give away the southern part of the country to Iran, we will lose the northern (Kurdish) part,” Saddam allegedly stated.

With Algerian mediation, Saddam entered into an agreement with the Shah of Iran, in 1975, known as the Algiers Agreement. The Iranians gained further territory and in turn, the Iraqis succeeded in ending Iranian support to Barzanî.

The Shah then urged both Washington and Tel Aviv to withdraw their support to the Kurds as well, which they did.

Barzanî then issued an appeal to the Americans saying, “Our people’s fate is in unprecedented danger. Complete destruction hanging over our head … We appeal you intervene according to your promises…”

But the Kurds received no support. Barzanî’s revolt collapsed on March 6, 1975. The Kurdish leader gave up his fight against Iraq. Baghdad subsequently closed down Kurdish schools and continued the Arabization. Thousands of Kurds were killed, and over 100,000 were forced to flee to Iran and Turkey. Barzanî himself ended up in the US and died of cancer in 1979.

Later on, American support to the Kurds was investigated and the results were published by the Pike Committee. The survey showed that even though the Americans and Iranians supported the Kurds, supplies to Barzanî were deliberately being kept at a minimum, three months at a time. Iran didn’t wish for the Kurds to become powerful enough to be able to establish their own state as this would inspire their own Iranian Kurds to pursue the same. The US didn’t wish for the same, as to not offend their NATO ally, Turkey.

This article originally appeared on Jiyan.dk in Danish, by Danish journalist and Middle East expert Deniz Serinci. The below version has been translated and republished by The Turban Times, with permission.

These days, a special guest has announced its arrival in Amman's otherwise bustling and trafficked streets.