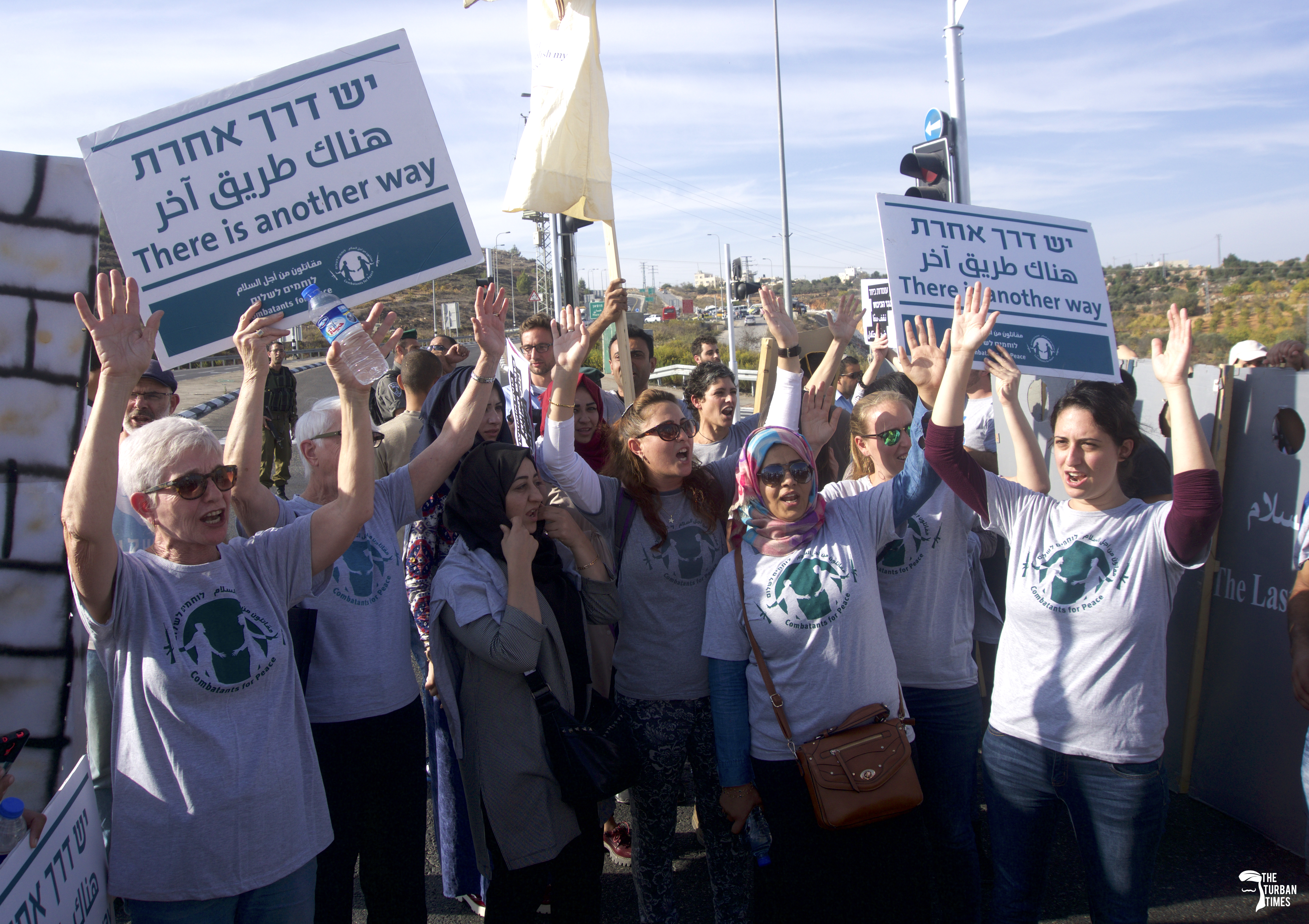 Personalizing the conflict – the women in Israel-Palestine

“Too often, this conflict has been discussed from a male-dominated “macro” point of view and there has been too little focus on the experiences, the opinions, and the voices of the women who live it.”

Sarah Arnd Linder is the founder of the project “Political is Personal/Israel+Palestine”, which aims to bring to light the female voices in Israel-Palestine. She herself lives in Israel today and believes that the inclusion of female voices in the conflict happens too rarely – something she hopes she can change with her storytelling project.

Sarah, who is both Danish and Israeli, lives in Givatayim, next to Tel Aviv, and has been living in Israel for 10 years now. She has a bachelor’s degree in Conflict Resolution from IDC Herzliya and a master’s degree in Middle Eastern History. After having done different work for peace organizations such as “Peres Center for Peace”, she decided that it was time to focus on the women in the conflict.

What is ”Political is Personal” about?

Basically, it’s interviews I make with Israeli and Palestinian women inside of Israel, in the West Bank, and in Gaza. I interview them about various things but most of it is about their relation to the conflict. I don’t look for specific women or specific stories. Everyone has something to tell. I also ask about their interests and what they do so it doesn’t turn into some sort of a ”victim story”. But I usually never have to ask about too much before the women start sharing their stories with me.

You’ve chosen to focus on the women in the conflict. Why is that?

There’s a lot to deal with in this conflict. Not just the relation between Israel and West Bank, but also how it is to be a leftist in Israel, the racism, the weird relationship between Ashkenazim (Central and Eastern European Jews) and Mizrahim (Oriental Jews) and so on. The reason I chose to focus on women is because it’s a personal matter to me I guess. The first time I became more aware of how it is to be a woman, not just in Israel, but in the world in general, was back when I was studying at IDC Herzliya. Here I became more aware of the dynamics in Israel, the meaning of religion in society and what it means to women, and so on. Also, I’ve had several bad experiences in the whole NGO world, of which most are driven by men, where I generally feel that women don’t have as much of a say.

Both UN’s resolution 1325 and gender mainstreaming have been to very important inspirations for this project as a whole. 1325 was passed by the UN Security Council in October 2000 calling for the enhanced female participation in the prevent, management and resolution of conflict, recognizing the need to mainstream a gender perspective into peacekeeping operations. This has definitely had influence in the project’s objective of raising female voices, making them visible in this conflict.

Are there any specific stories that has touched you?

A lot of them have, actually. The first woman who really had an impact on me was Manal. A Palestinian woman from Gaza who I spoke with via Skype. I remember her telling me something humiliating she had been through, something very personal for her, which I could see in her eyes while she was telling the story. Despite this, she didn’t shed one tear and I just remember thinking how brave this person was, telling a story as personal as this to a stranger.

“A female Israeli soldier asked me to take off all of my clothes, except for my underwear, and to walk around the room. I cried and said that I couldn’t see, who was watching through the window. She began laughing and said, “No one is interested in seeing this!” I replied that it was my right not to get naked in front of her, to which she answered that even if I were to go back home, I would still have to do this. And so I took off all of my clothes, except my underwear, crying.” – Extract from Manal’s story

What do women from the West Bank or Gaza focus on in their stories vis-á-vis women from Israel?

For Palestinian women, it’s the occupation. Everything from how it is to go through checkpoints, the hassles of not being able to drive from one place to another freely, and the frustrations of having your life so controlled by [Israeli] soldiers. Occupation is what these women have in common.

I guess the occupation is a challenge for both men and women in the West Bank. Are there any specific challenges for the women?

I think the women maybe feel that they are not being listened to that much. That’s kind of my general perception. Also, that there are many internal problems in the Palestinian society. I’ve also heard some things, that I was not given permission to share, where I could feel that these women experience other, internal, challenges as well, but that these are not main priorities right now because of the occupation and all of its challenges.

A more nuanced perspective on the women of the conflict

How is the situation for women in Israel – the Jewish, Christian, and the Muslim?

So you’ve lived in Israel for 10 years now. How would you say it is like being a woman there?

Oh, well that’s complicated. It depends on where you live, if you’re an Ashkenazi or a Mizrahi, and so on. In a way, I feel privileged being Ashkenazi because of the racism Mizrahim go through. But still, I also think a lot about religion’s influence on women in society. For example, if I am to get divorced, my case has to go through the rabbinate where women don’t have much of a say. So I can risk not getting my gett [divorce papers] and I don’t like the idea of being dependant on some rabbis. Also, in Israel, there aren’t a lot of women in control. In the Knesset [Israeli parliament] for example, there aren’t a lot of women. In general, Israel is very militaristic and there’s a lot of pressure on being macho and not weak.

Do you find it important that women from Israel, the West Bank, and Gaza hear each other’s stories as well?

Yes. I believe there is a genuine interest on each side to learn more about ‘the other’. I think there is some strength in these people learning about each other and hearing each other’s stories, instead of just hearing something ‘non-personal’ from the media. My friend is not very political but when he heard Manal’s story he was very touched and even told the story to his friends, without me even knowing about it.

What do you hope to achieve with this project?

It is not a peace or human rights organization. The focus is not on the occupation as such but instead on the women and their stories. I hope that it will in some way contribute to solving the problems related to the conflict and that the stories in the long term can be used as first hand data to use for looking at how the women experience the conflict, what their needs and their challenges are. In addition, I hope it will be used as data in the academic world, for think tanks, and maybe even by politicians who deal with conflict resolution. In general, I hope the project and the stories will create more nuanced perspectives on the women in the conflict. I have high hopes for the project and I will definitely continue with my work.

“No other nation can liberate Afghanistan”

"No other nation can donate liberation to Afghanistan."