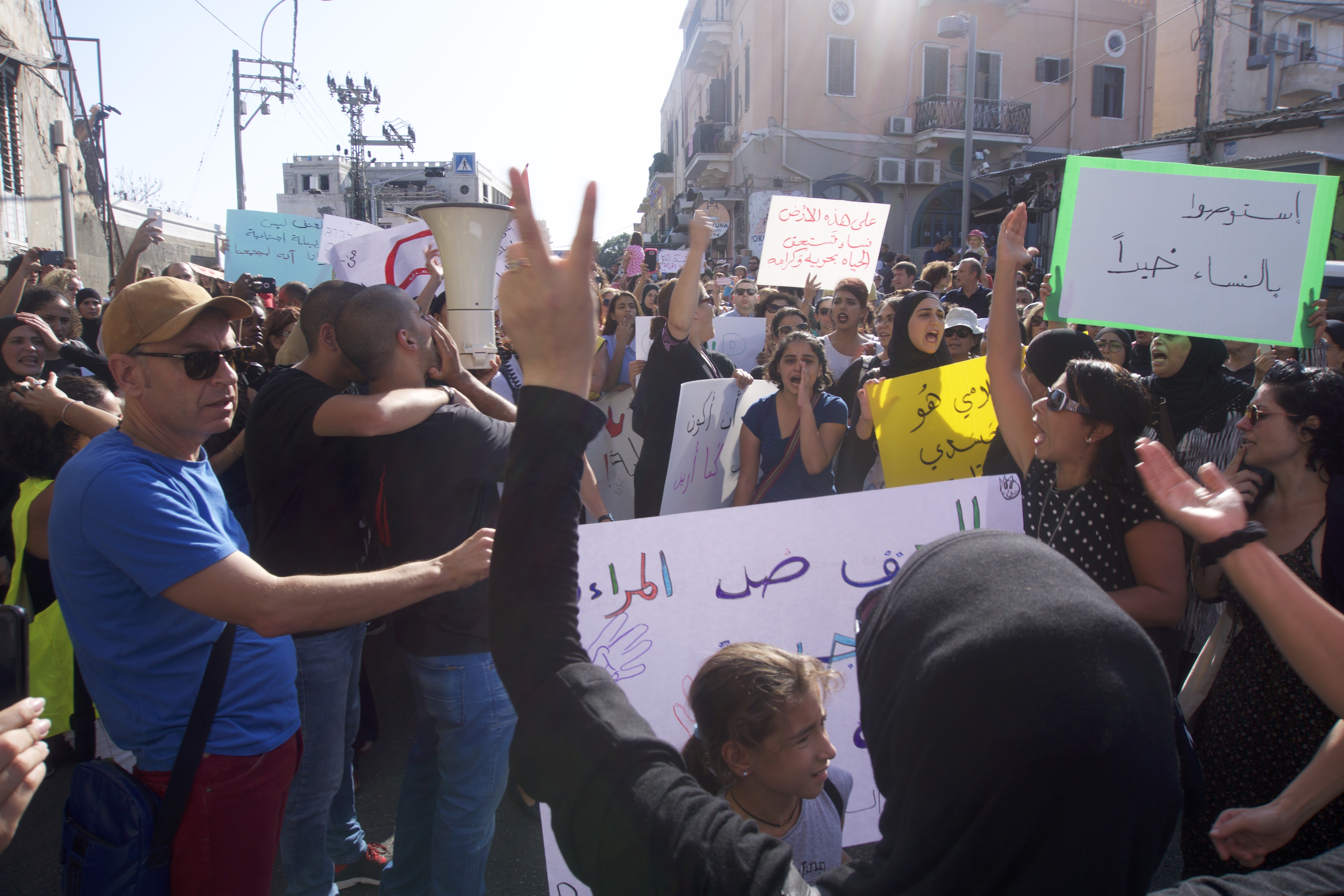 The ‘women’s intifada’ continues: “Do not fear the revolution, my women”

Two Palestinian women from Jaffa were stabbed to death this week – but not in the context of the recent knife-related violence in Israel.

Instead, according to female Jewish and Palestinian activists in Israel, these killings are part of another problem, a severe problem – a ‘trend’ in Arab-Israeli communities.

The two recently murdered women are in fact the sixth and seventh victims of gender-based violence against Arab women in Israel this year alone. In 2015, the number of women being killed in this context (often by family members or relatives) reached a total of nine victims.

This time, however, the women were not going to let it pass by as though nothing has happened.

This week’s killings of Hawida Shawa, 44, by her husband, and Huda Abu Sarari, 37, mother of four, by her ex-husband, have caused great anger and sorrow among both Palestinian and Jewish-Israeli women in Jaffa and beyond, who were still mourning last month’s murder of 32-year-old Dua’a Abu Sharkh, a mother of four killed in the city of Lod, allegedly by a family member.

Following Abu Sharkh’s murder in Lod, Palestinian and Jewish-Israeli women took to the streets in great numbers in Lod, Jaffa, Ramla, and other cities in Israel, marching together in a protest against gender-based violence – the hitherto largest of its kind – since dubbed “the women’s intifada”. The protests also targeted Israeli police for their “alarming selectivity” in cases like these.

After the killings of the two Jaffan women, the women’s movement has grown even stronger, and the activists believe strongly in their fight.

At least 500 Palestinian and Jewish women marched together on Friday in another large protest, along the streets of Jaffa – picking up from last month’s protests – shouting “Arab women are free!”, “We have the right to live!”

Women and men, young and old, Jewish and Palestinian, Knesset members and citizen activists, all coming along for one goal under the banner “Stop the violence against women!”

As Friday’s protesters marched towards the symbolic HaShnayim Garden, the anger, sorrow, and solidarity were dramatically clear. Anyone present would not be in doubt – these women had no intention of letting the killings of their fellow sisters go on.

“Do not fear revolution, my women. Your voice is your sword. If we do not live to see victory and salvation in our generation, we will bear the next one — a generation that fights for women’s rights.”

IN PICTURES: Strolling around on Yom Kippur

The empty streets of Israel during Yom Kippur is like a scene from I Am Legend – scary, but cool.