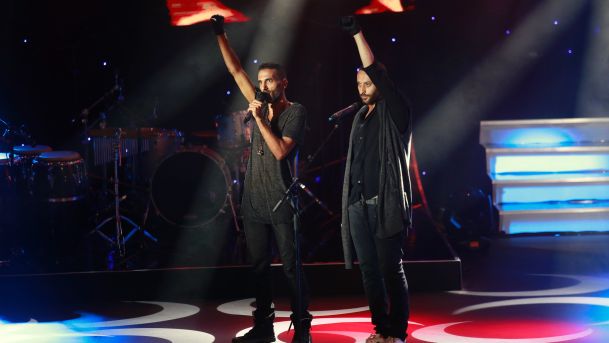 Jewish performer Yossi Tzaberi and Tamer Nafar, the Arab star of the Israeli film "Junction 48," raise their fist in a sign of protest during Ophir Awards. September 22, 2016. Credit: Ilan Assayag
In VideoNews Report

In the days before the opening of the festival of community theater, right-wing activists stated that the show of the Palestinian rapper Tamer Nafar will not exist. Culture Minister Miri Regev also appealed to the mayor of Haifa to cancel the appearance of Nafer. Eventually the show was held, despite the high presence of right-wing demonstrators draped in Israeli flags in the crowd.