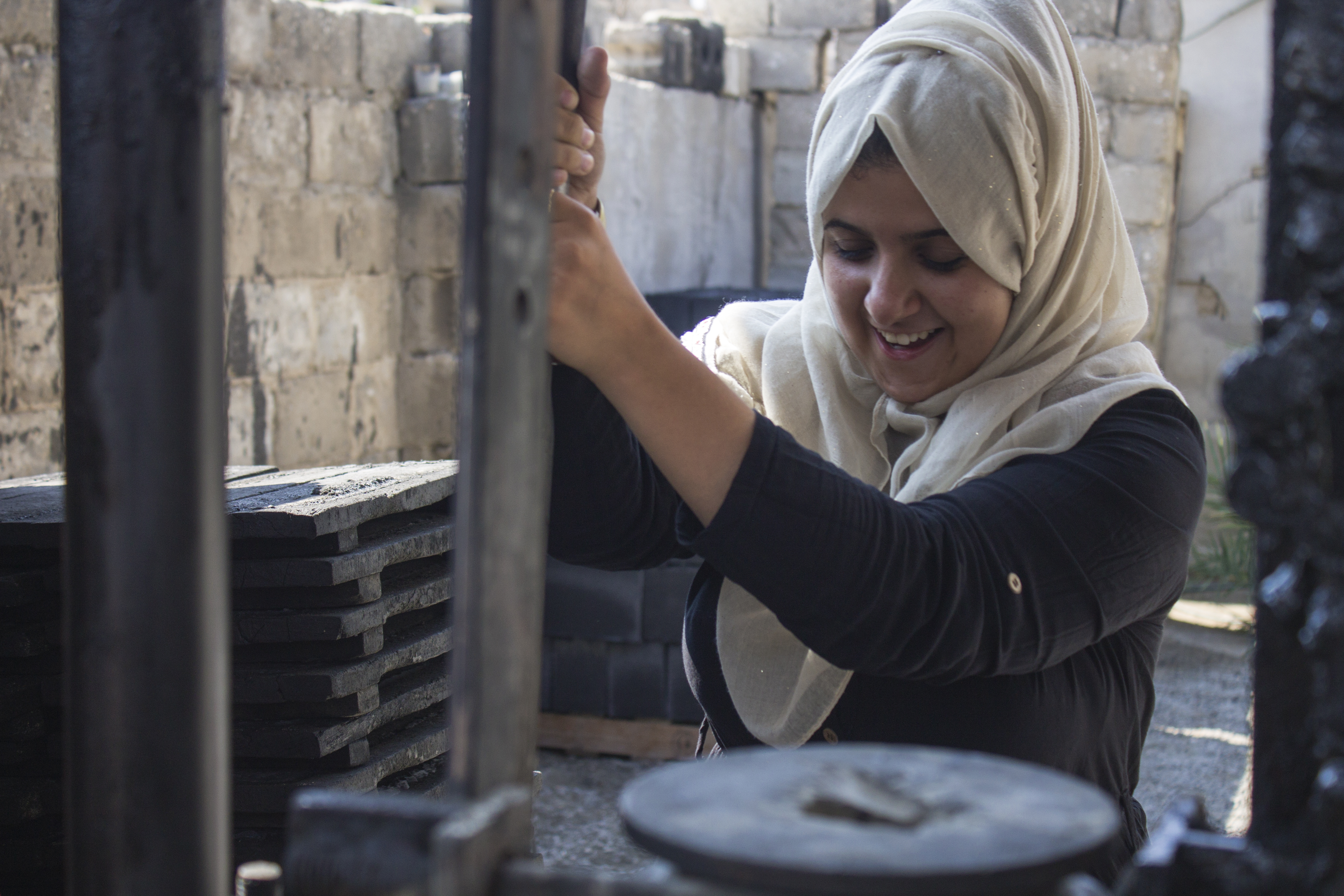 By innovating a light, cheap and environment-friendly building block, two female Palestinian engineers from Gaza have won the first place in a UNRWA entrepreneur competition and at the same time are challenging the stereotypes of women in their society.

It’s a very common sight to see two ladies happily drinking their morning coffee where one of them presents the other a slice of the cake that she has proudly made herself. Whether it’s a cake, cupcake or maybe a red velvet one. But when it comes to the story of the “Green Cake”, is it something completely else and will take your mind into a whole different scene!

What is Green Cake?

In their last year in college, Majd and Rawan were training in different construction firms in Gaza. They both recognized that the blocks used to build were not powerful enough, due to the lack of cement the siege imposed on Gaza has resulted in. Therefore, the two girls decided to create their own new bricks – much more powerful, and in the same time solving a real environmental problem.

The long journey began with failure and mockeries –  even from close ones!

The two engineers were searching for a waste material by product that makes negative effects on the environment in Gaza. After a long time of research, failing and achieving, they finally were able to transform the wasted tons of ash, produced by burning coal, that is used to make clays in Gaza, into a relied on, basic element in their block, Green Cake. Basically, these amounts of ash are not used. They’re usually buried and so leak out and contribute in polluting the ground water in Gaza.

Majd and Rawan have omitted the aggregate and sand – in bricks normally – and replaced them with wasted ash in their Green Cake. They have produced more than 100 blocks as experimenting samples. At first, their blocks were horribly failing in the concrete tests (where they measured the blocks’ power), and every time theses blocks failed, both girls would try to solve the problem; They were going to construction factories and test labs by themselves, and would always hear mockeries from people around them, like, “how would you change people trust’s in a block that have been used for 50 years!”, and sometimes people would call them “Girls of Blocks”. The two girls’ families were also not so certain what their daughters were trying to achieve, but they didn’t stand in their way either. And finally one day the girls succeeded in their goal; their block had gained a result higher than a normal block would gain – and that was one of their best days ever.

“Green Cake” is lighter, much stronger, and cheaper, compared to ordinary building blocks. This block is environmentally friendly, that’s why it’s “Green”, and it has bubbles within it – what makes it lighter and insulate sound and heat – hence the word “Cake”.

The credits for the “Cake”

The two girls were also supported by the incubating program, Mobaderoon, and received both technical and financial support for the program directed by the Islamic University of Gaza that helps and supports creative startups in Gaza.

Recently, the two engineers’ project won the first place in the Gaza Entrepreneur Challenge held by UNRWA in collaboration with the Japan Gaza Innovation Challenge (JGIC) initiative. Their Green Cake is now in the process of taking out the patent, and the two girls have also competed in the finals of a competition held by MIT Enterprise Forum Pan Arab – one of the 28 worldwide chapters of the MIT Enterprise Forum Global, an avid promoter of entrepreneurship and innovation worldwide.

And not only that! They are also getting orders from people who are excited to use these “cakes”, and so they’re now launching a fundraising campaign to make their own production line.

By changing the stereotypes of women in their community and contributing in world change, Majd and Rawan hold tightly to fulfill their dream in making this Gazan-born block a well known brand with many branches, all over the world. And this is in my opinion a great example of what exactly resilience means in Gaza. While Israel demolishes homes and close borders, Gazan people innovate new materials and rebuild.