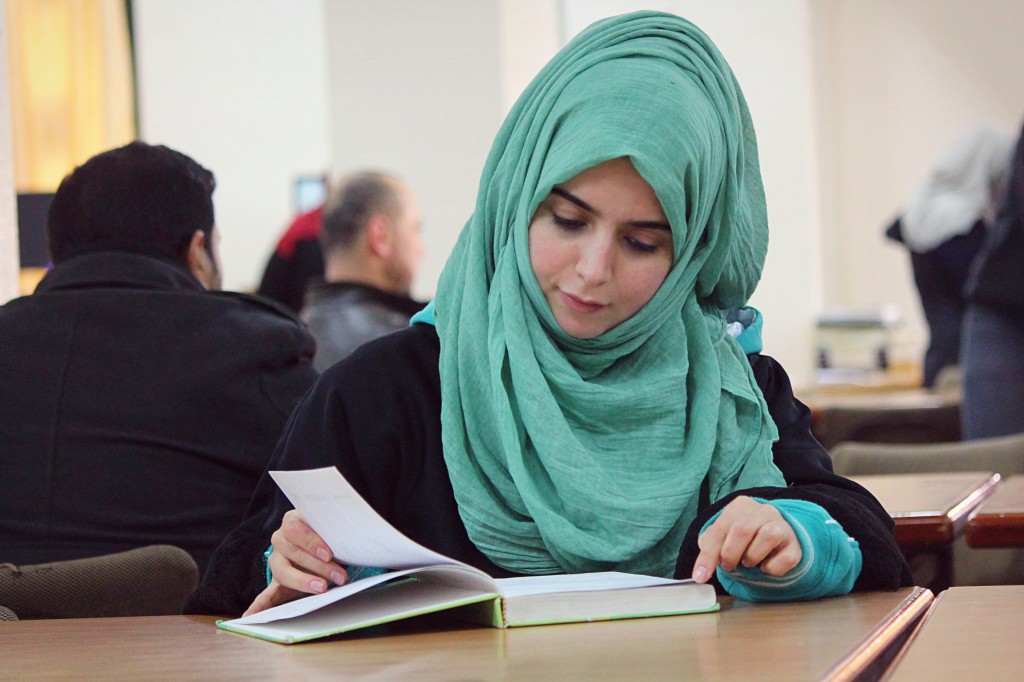 Demier at the library of The Islamic University of Gaza. Credit: Asmaa Elkhaldi

This Turkish woman moved to Palestine to study at the university

“There’s life here. If you want to find the real meaning of life, come to Gaza!”

“Before I came, people have told me that there’s no life in Gaza — but when I came, I found that the heart of life is beating in Gaza,” Rukeiya Demier, a 26-year-old Turkish Muslim Girl from Diyarbakır, said. Demier dreamt of Gaza since before she could remember.

She came to Gaza four months ago through the Rafah border, where she experienced the hardship that is expected when traveling into and out of the territory.

After five days of sleeping on roads and long hours of waiting, she was finally able to enter Gaza. “Once I entered the Palestinian land, I forgot all the struggle I had on the border,” she said. “I really felt of the peaceful atmosphere, it was my happiest moment ever!”

Demier saw the resilience of the palestinian people. ‘They make jokes while they’re going through a tough time, they give when they’re in so much need,’ she said.

“We’re free enough to do whatever we want.”

Demier first studied in Turkey, but at that time, she was required to remove her hijab at college, which was against her beliefs. As she put it, “We’re free enough to do whatever we want.” She went on to study at the International Islamic University in Malaysia as a first-year student in psychology. After finishing her Bachelor’s in three years, she returned to Turkey and landed a job.

Demier’s family knew that she always wanted to do her Master’s, just not in Turkey. She once sat with her mother and told her, “Why not do my masters in Palestine? We’re Muslims and they’re Muslims, and Allah is always there to help and support.”

It took her two months to finally persuade her family. They were worried at first and some family members even said that’s impossible to enter Gaza, but they let her go. “Allah has made it possible,” she said. Demier now plans to get her Master’s degree in psychology at The Islamic University of Gaza.

When she successfully made it to Gaza, her mother noticed that she had gained weight, which — in Turkey — means that the person is happy, so her mother was satisfied.

Demier first lived in an apartment in Jabaliya camp, “the heart of Intifada” as she calls it. People who own this building support and consider her to be a family member. She expresses her admiration of how the Palestinians give endlessly albeit their suffering —her first apartment was even given to her for free. Now she’s renting an apartment near the university, and feels very safe to live by herself.

“There’s life here. if you want to find the real meaning of life, come to Gaza!”

She has made many friends, from the school to the gym — wherever she goes. She has witnessed Eid Al-Adha and Friday prayer. Demier enjoys the simple life in Gaza despite experiencing all the daily obstacles. “When the power is off, it becomes more peaceful,” she said. Demier saw the resilience of the Palestinian people. “They make jokes while they’re going through a tough time, they give when they’re in so much need,” she said. “In spite of all things, they wake up in the morning to continue this battle of life. Those people will rewrite the history of the world.”

“My blood is Palestinian”

Demier feels grateful for being in Gaza and feels Palestinian herself. “My blood is Palestinian,” she said. This experience was ideal for her to practice her Arabic, as she completed six levels of the language during her study in Malaysia.

Demier’s story inspires many foreigners to come to Gaza and some are even asking her how they can continue their education there. She has also motivated the Gazans to love Gaza from a different perspective and value the life they have. “When people see me here for my masters, they smile,” she said. “I’m the reason for their smile and that makes me happy.”

“Life is not about being beautiful or being rich, it’s all about your humanity — and you shouldn’t call yourself human until you feel the pain of others,” Demier said. “There’s life here. If you want to find the real meaning of life, come to Gaza!”

This story by our blogger Asmaa Elkhaldi originally appeared on the website Muslim Girl. A version of the article appears on The Turban Times with permission.

This is the story about Karen, the maid of my green grocer, her colleagues, those who fight for their rights,...