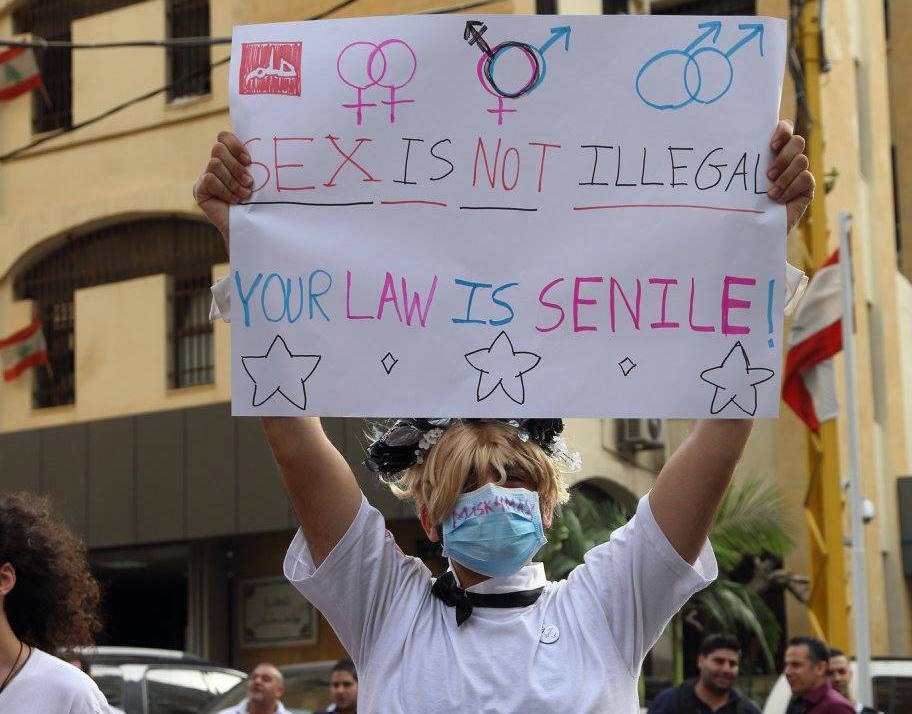 Protester at demonstration in Beirut on the International Day Against Homophobia and Transphobia 2016. Credit: Helem

The LGBT movement in Lebanon is growing. Signs of a changing mindset are traced in statistics and street level conversations. In a country where homosexuality is punishable, this marks a growing gap between social life and the laws.

For a short moment on January 26th, Joseph Aoun and his colleagues at Helem, a Lebanese NGO for LGBT rights, went jumping around in their office in Beirut, full of joy and relief. For the fourth time since 2009, a Lebanese judge had ruled homosexuality not a crime. Going against Article 534 of the Lebanese penal code, which states that sexual acts “contradict the laws of nature” and can be punished by up to a year in prison, the judge had claimed homosexuality a natural human right and called on to respect the privacy of the individual’s body.

A battle was won.

And then again, not yet.

After this short ecstatic celebration, reality dawned on the office. After all, the fact that homosexuality was just decriminalized in a court case did not change the fact that it remains criminalized by law. The legal system still gives legitimacy to the police to continuously persecute and arrest homosexuals and trans people. NGOs like Helem still face restrictions. Human rights of LGBT people remain challenged. The judge’s statement gave some hope, but as Joseph puts it, “we’re not in La La Land”.

One thing, however, remains certain. Lebanon is an interesting and progressive case for LGBT rights in the Arab region. Over the past 20 years, the social conditions of LGBT people have become a subject of an ever-broader debate. Gay bars have sprouted in Beirut. A civil society movement has grown visible, and its messages are taken increasingly into account.

How Lebanon became a safe(r) place for LGBT people

Joseph Aoun is the Community Center Coordinator at Helem. He has been in the position for eight months now. He was previously managing a well-known gay bar in the heart of the capital, meanwhile working as a blogger and activist.

To understand the debates and ambiguities around LGBT rights in Lebanon today, and to understand the impact of the recent court ruling, we need to go back to the birth of Helem, Joseph tells.

Helem is the first NGO for LGBT rights, not only in Lebanon, but also in the Arab world. The LGBT movement as a regional rights movement rises from Helem, Joseph says. Helem started out as an underground movement in ‘98. It started as a group of people who decided that it was about time to go up front about LGBT rights. In 2002, they founded an initiative called “Club Free”, and from Club Free, Helem saw light in 2004.

The registration of Helem is in itself a good example of the ambiguity of the Lebanese system: When Helem’s staff demanded to be officially registered as an NGO, they did not get the needed approval. Nevertheless, they were not refused either. Despite not acknowledging them fully, the Lebanese state gave them the legal permission to work.

During the following years, many of the founders who started in Helem got independent, and there are now several NGOs working with things related to the LGBT community, ranging from health clinics to film clubs and magazines.

In fact, Lebanon has become a transition country for LGBT people from all around the Arab world who want to seek refuge in EU. Together with Turkey, it is a country where LGBT persons can stay relatively safe while applying for refuge in the EU. To meet the demands of these people in transition, Helem also opens their doors to non-Lebanese.

Bumps on the road towards progress

Reading the story of the development of Lebanon’s LGBT community, one might feel tempted to think that Lebanon, though not having reached there yet, is moving straight and uninterruptedly in the direction towards La La Land.

To draw such conclusion would be wrong. Helem does not turn out of all battles with a victory, Joseph stresses. One area where the conditions are worsening is the subject of police abuses. In the same period where rights questions have been increasingly discussed and where judges have begun to rule in favor of right to privacy, the number of homosexuals detained by the police at the Hbeish police station in Beirut has doubled.

The way Lebanon’s main police force treats LGBT people is known to be harsh and in conflict with the human rights Lebanon has committed itself to respect.

In general, LGBT people are vulnerable to discrimination by the police, and cases of violence and other degrading treatment are countless. As long as the law is in function, people will still be detained, and as long as they can be detained they are in risk of being abused by the police.

When it comes to the question of article 534 Joseph is hardly optimistic. He does not expect it to be abolished anytime soon. “It’s too complicated,” he says. “It will require a change in election laws, allowing new minority parties access to the parliament and decision room.”

“To be frank, the politicians are stuck,” he continues and points out that it is not only the law against homosexuals, but also gender legislation and moral laws, which belong to a different era, that needs to be changed. “Do you know that to this day in Lebanon we still have a law that criminalizes a guy who wears shorts?” he asks me to illustrate his point.

Although the political scene seems unreachable, Helem has been able to gain influence outside of the parliament. The recent court ruling, for example, was a result of the work of Helem. Joseph can tell this with certainty, because the actual legal interpretation of the judge was inspired by a project titled “The Exemplary Defense”, which Helem did two years ago together with another Lebanese NGO called Legal Agenda.

“It’s not something that came out of the blue. It’s not like all of a sudden people woke up and found tolerance,” Joseph tells. However, slowly, the civil society is changing its attitude: “I believe, the Lebanese society tends to revolt silently. There is always this hypocrisy between the laws and what society is thinking.”

Joseph has visited countries where homosexuality was legal, but where the fear among LGBT people was higher that he would ever have imagined. It even made him feel blessed to live in Beirut. “I don’t believe the Lebanese people are that homophobic,” he concludes.

The change in attitude is visible in many ways. About two years ago, one of Helem’s sister NGOs made a study. It showed that more than 50% of the Lebanese were against imprisoning LGBT people. And in a country where LGBT activism is about fighting for the right to not be physically beaten, abused or exposed, 50% marks a big change, Joseph says.

Since the court announced its decision and Helem went online with the story, several local TV stations have sent it as part of their news and have come to interview Joseph and his colleagues. For the first time a case of LGBT rights was not only covered by one or two stations, but several media platforms, in popular programs and during primetime.

The court ruling also helped to open the questions to the public and change the language used about homosexuality. Joseph has noticed how people have started to use the Arab word for homosexual instead of “pervert” or “faggot”. This is something Helem has worked to promote in the media.

In May, the International Day Against Homophobia and Transphobia will be celebrated in Beirut, and Joseph hopes the court rule will serve to mobilize more people. Last year, around 50 gathered in front of Hobeish police station to protest. This year, Joseph expects the turnout to be much bigger. “We’re aiming to involve not only in the LGBT community, but also other allies like women’s rights and human rights organizations,” he tells.

Abbas restoring balance to the universe

The people of Gaza are beyond hysterical and entirely torn up between the childish Fateh-Hamas absurdities.