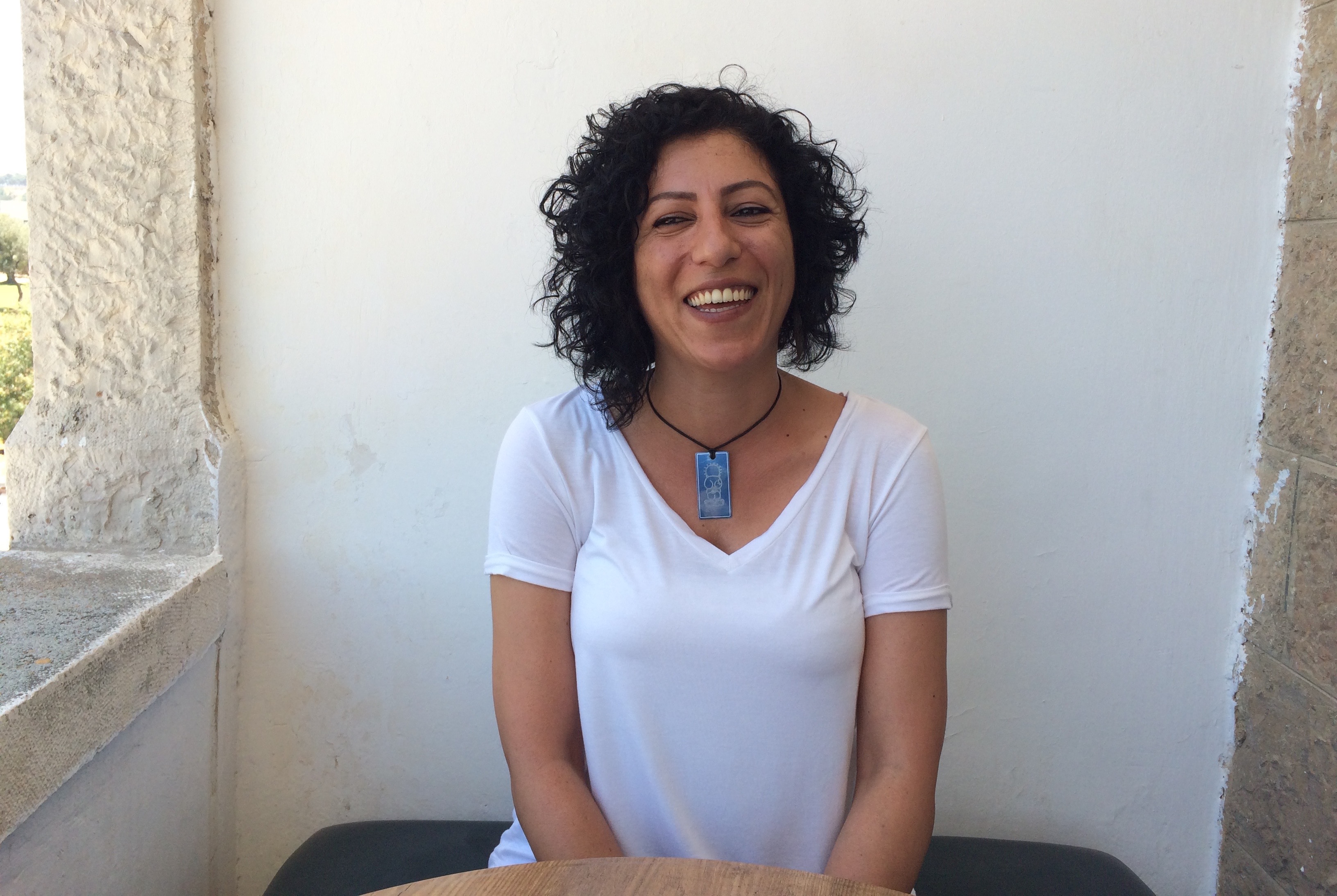 Fayrouz Sharqawi during the interview. Photo: Anas Kababo for The Turban Times

Fayrouz Sharqawi: “The revolution will not be funded”

I meet Fayrouz Sharqawi in her office just a few blocks from Damascus Gate. The street-level hallway leading me to the tattered staircase looks like any apartment entrance in this busy neighbourhood of East Jerusalem. As I climb the stairs and reach the second floor of the building, the atmosphere changes. Warm rays of sun stretch through the glass ceiling, hitting the pale limestone walls and the sporadically furnished office space of Grassroots Jerusalem appears in front of me. As I spot Fayrouz, I am greeted by a welcoming smile which is quickly followed by a swift string of words guiding me through the artefacts of the office space. The space is itself an embodiment of this alternative development organisation: the wall-sized map of Jerusalem, the artist space, the library, and the crammed computer office all tell the story of a self-made endeavour. Fayrouz’s easy-going manner reveals that she is more than accustomed to her role as director of global mobilisation, hosting guests from all the world. She effortlessly skips from one topic to the next, linking the miseries of the Palestinian Authorities to the jam-packed nature of the computer office. It is the goal of Grassroots Jerusalem, she tells me, to contribute to a long-term strategy for Jerusalem based on the narratives of Palestinian communities. “Because in the situation and reality of today, it seems like everyone is deciding about our own city’s future but us.”

Breaking the cage of international aid

Grassroots Jerusalem started as one of the biggest EU-sponsored projects in the history of Jerusalem. As they set out, Fairouz and her colleagues were excited to be able to influence the development of Jerusalem, a city in which Palestinians see a different face of the Israeli occupation than other Palestinians communities. Palestinian Jerusalemites, for example, have the legal status of residents in Israel, but do not have the right to vote. Now, a few years after the big EU-donation, Fayrouz and the Grassroots have become disillusioned about the international donor-system.

“We have already felt the effects of the system of international aid. You feel it the moment you begin,” Fairouz tells me when I ask her why her organisation has decided to completely reject foreign funds.

“This way, it means that we don’t lead the change”

“We think that such a structure does not allow Palestinian organisations to keep their own identity. When you have to follow someone else’s agenda, then you drift away from your own identity and vision and aspirations. You have to fit yourself to the calls, you have to fit yourself to the area that the donors decide, according to the priority of funding right now. When the civil society is chained within this structure, then civil society cannot strategize long-term which is very crucial for bringing about real change.”

According to Fayrouz, the biggest obstacle to local development is the fact that Palestinian civil society is dependent on this source of income and therefore cannot afford to challenge the demands set by their benefactors.

“This way, it means that we don’t lead the change. The right way should be that the people who are the owners of the place, who are the residents of the city are the ones who decide, based on their own visions and agendas what kind of future they are building for Jerusalem”.

As an alternative to this system, Grassroots Jerusalem is trying to build a model of self-sustainability which is based on income from their own activities. These activities include political tours of the city as well as a political guide book for Jerusalem – both of which are provided for tourists and NGOs.

“The idea is to generate income from these products in a way that will – in the long run – make us entirely self-sustainable and self-sufficient. Right now, the goal is to decrease our dependence on external aid.” Her dream is to create a successful model of self-sustainability, which can be passed on to partner organisations to try out. “Hopefully they can, themselves, become a little bit more independent, a bit more self-sustainable. We would like to see everyone else less dependent on international aid,” Fayrouz tells me.

But it is not only the structure of funding which prohibits efficient development and proper political change in Jerusalem. Grassroots Jerusalem are not convinced by the approaches that often define development funding. They believe that the methods of international organisations lack the contextualization needed to tackle the issues that Palestinians face. “I think that the number one threat is this system that is foreign to us, provides us with tools that are foreign to us,” says Fayrouz, referring to the structures of international aid.

International donors should stop pretending that human rights tool-boxes can be transferred from civil society organisations in Europe and applied effectively to the situation in Palestine. “It is not about whether I have a sewage system and proper infrastructure or freedom of movement under occupation. The Palestinian aspiration is to end the occupation, to be free. I think that there is a discrepancy between the vision that these development agencies are implementing here and the reality they are working in. And this leads to a direction that is not necessarily where the Palestinians want to go. It doesn’t allow us to eventually liberate ourselves and our land.”

The decision to reject foreign funding has been based on the grievances with the way that the system of international aid works. For Fayrouz and Grassroots, it seems that the international organisations and donors are not willing or able to tackle the core problem. “Let’s talk in practical measures”, Fayrouz declares:

“Right now, international aid mainly helps Palestinians survive under occupation. Even though it is important to admit and recognise that Palestinians need alternative shelter when their homes are demolished and they need permits to cross check-points to reach medical care and education – it is crucial daily life needs for Palestinians. But as long as the international aid is focusing on providing that, and missing the point of ending the reason for our need for this support, it means that we will always be dependent on them, always need them to help us. So instead of providing Band-Aids for the wound, they should cure the wound. And as long as they don’t cure the wound, meaning they don’t end the occupation, we will always need their alternative shelter and we will always need their advocacy and we will always be dependent on them. Right now, international NGOs and UN agencies are not creating any sustainable situation here, the only sustainable thing is their own presence in Palestine.”

The Palestinian Authority – demos or demolition?

The international community are not the only ones at fault. The Palestinian Authority, which have been presented as the only legitimate Palestinian representative and authority in the Palestinian territories since the initiation of the Oslo Accords in 1993, are to blame as well, Fayrouz says.

How do you see the role of the Palestinian Authority [PA] in sustaining this development agenda that you have described?

“First of all, the PA is one big NGO in Palestine. This is how I personally see it and this is how we at Grassroots Jerusalem see it. It’s acting just like an NGO. The PA is the biggest example of how agenda is being dictated on the Palestinians by the donors who give the money. In addition to that, the PA is considered by most of the Palestinian people as a contractor of the occupation. It’s a collaborator, the PA. It’s a collaborator authority, collaborating with the occupation authorities. The PA does not decide what happens in Palestine. Not in the West Bank nor anywhere else. It is supposed to be the authority, but they are only doing the dirty job for the occupation: arresting political activists, putting off demonstrations and protests.”

What role do you think the PA plays in a global context – is there a hope for them to reach any of the political goals of the Palestinians?

“Based on our experience with the PA for 23 years now, the PA presence in general, first of all, provides the false impression that we have sovereignty as Palestinians, while in fact, we don’t. On the other hand, it creates this impression that we have a democracy, that we have a governance, that our government is speaking in the name of the people, while in fact the people feel so much alienation towards the PA. Even people who identify with Fatah, the political movement, which is heading the PA, many of these people consider the PA mistaken, collaborators, betraying its own people and so on. I think the PA on a global level helps create this lie. That there is Palestinian political leadership, that it is guided by the Palestinian aspirations, while in fact we know that the PA is just a puppet on strings. We don’t believe in it and we don’t believe that this is going to bring change because it is based on our experience of 23 years since Oslo. This whole cover is eventually covering the deepening of the occupation and the continuous expansion by Israel of its control over Palestinian land. We see that there is one state being implemented right now – the problem is that it is a Zionist one-state all over historic Palestine. So people prefer that the PA would just be dismantled, disappear, because they are adding to our own trouble.“

Bedouins – the backbone of Jordanian culture

Did you know that the Bedouins of Jordan are often termed as the "pure blooded" people?