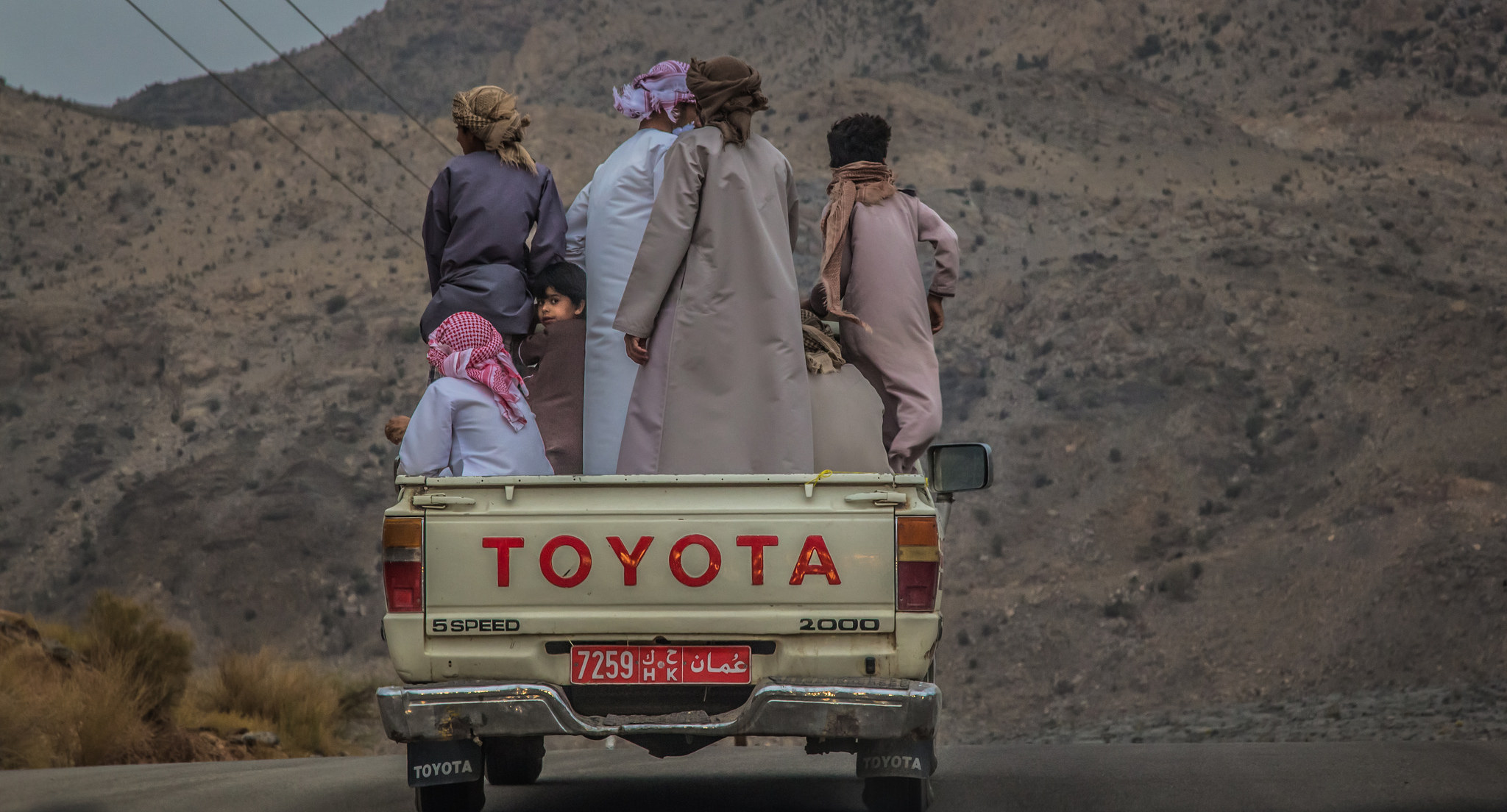 On the road in Oman. Picture by Robert Haandrikman is licensed under CC BY 2.0

Oman: Migration and the importance of state policies

Tone Delin Indrelid is a migrant. She has spent the last 14 years negotiating international moves, finding her way through host country rules and regulations to create new homes in new countries. In this text, she looks at migration patterns and host country policies in her current home, Oman.

Spending an afternoon in Al Khuwair, a busy commercial and residential area of Muscat, I can’t help but marvel at how diverse it is. The smiling Syrian restaurant owner greets me and my weekly order of dips and falafel at his popular corner shop. Omani men appear from the golden domed mosque nearby. A crew of South East Asian men sweep the streets, chatting in a language I can’t understand. A couple of Philippina women help small children into waiting cars while an elderly Indian lady walks down the narrow street holding a younger woman’s arm, looking serene in her pale saree.

Who are today’s migrants?

Migrants are a part of everyday life in Oman. Out of a total population of 4.4 million, approximately 45% are expatriates. According to the 2016 Statistical Year Book, they outnumber Omanis in both the country’s largest cities (Muscat and Salalah). Non-nationals are far more visible in the work force than in the total population: of a total of 2,255,409 workers, 429,806 were Omani while 1,825,603 were expatriate. They are found in schools, hospitals and oil companies; in people’s homes, in parks and in gardens; on the roads, in shops and in restaurants.

“A migrant,” according to the UN Refugee Agency, “is fundamentally different from a refugee. Refugees are forced to leave to save their lives or preserve their freedom, but ‘migrant’ describes any person who moves, usually across an international border, to join family members already abroad, to search for a livelihood, to escape a natural disaster, or for a range of other purposes.” Migrants in Oman are predominantly foreign migrant workers – here understood as “…foreigners admitted by the receiving State for the specific purpose of exercising an economic activity renumerated from within the receiving State. The length of stay is usually restricted as is the type of employment they can hold.”

Oman’s history of migration goes back several hundred years but the migration patterns we see today started with the oil boom of the 1970s. Oman’s state income significantly increased, and substantial development projects were started under the benevolent leadership of His Majesty Sultan Qaboos Al Said Bin Said, to build and modernize infrastructure. At the time, the local population was largely too small/too young and/or lacking the necessary skills to fill all the positions needed, resulting in a rapid increase in the non-national population. This pattern was seen in all the Gulf Cooperation Countries (Bahrain, Oman, Saudi Arabia, Kuwait, United Arab Emirates and Qatar), as discussed here and here.

Initially, most of the migrants originated from other Arab countries such as Jordan, Yemen, Egypt and Syria. With time, countries in South East Asia, like Pakistan, Bangladesh, Philippines, Sri Lanka, India and Indonesia became important sending States. A small percentage of migrants are from so-called ‘Western’ countries.

The migrant population differs starkly in terms of educational level and income. As Roper and Baria (2014:33) state, “…the GCC countries rely on two main types of migrant workers: low-to mid-skilled workers in construction and low-tech industries and services, and mid- to high-skilled workers in high value added services.”

In Oman, the latter is a mixed group hailing from all over the world, while the first consists mainly of South East Asian nationals. In addition to these two groups, there are domestic workers, mostly female and predominantly from South East Asia, though rising numbers appear to come from African countries.

The ideal of migrants as temporary guests

As anyone who has moved across State borders will be able to tell you, your freedom of movement is severely restricted by your citizenship, your education and skills, and receiving as well as sending States’ laws and visa agreements. All countries have clear rules in place to regulate entry and residence of its non-citizens.

These regulations correspond with how migrants are seen – as necessary but temporary guests, as long term or potentially permanent members of society and the State, or somewhere in between? 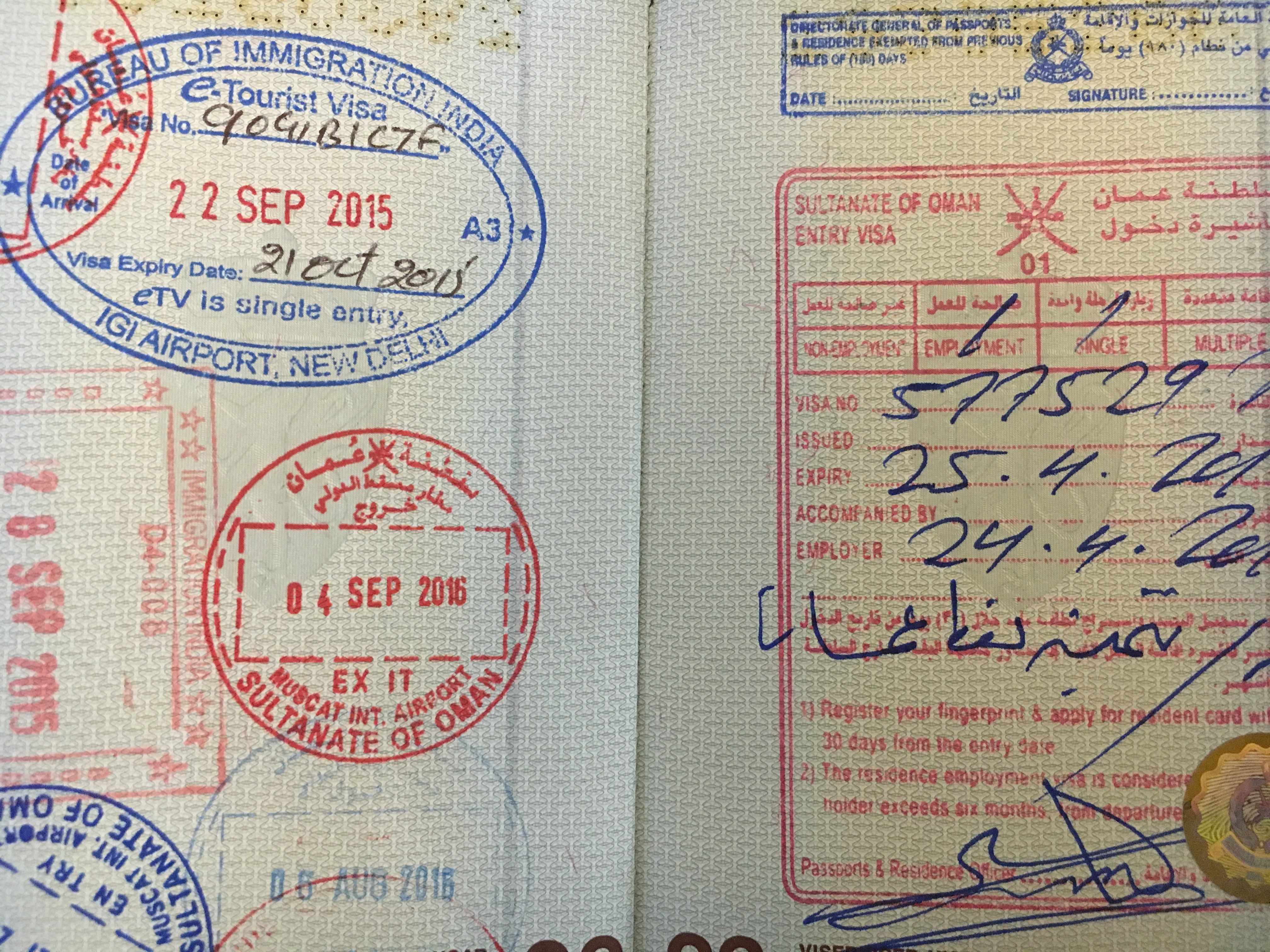 GCC migrants are generally seen as temporary guests; they fill a temporary need in the work force and when their job is done, they should ideally leave. Integration, permanent residence and naturalization are not a given.

Here are a few examples of how this ideal of the temporary migrant manifests itself in Oman:

The Kafala System – the legal basis for migrant residency and employment

Perhaps the most important aspect of life as a migrant in Oman is the kafala system. The kafala system, often translated as ‘sponsorship,’ functions as “…the legal basis for [migrant] residency and employment, [and it] requires the sponsor-employer to assume the full economic and legal responsibility for the employee during the contract period.” (Droper and Barria 2014:34).

Every migrant must be under the sponsorship of an employer, in the form of a private citizen or a private or state institution/company, whilst residing in Oman. The kafala system ties migrant to kafeeel, employee to employer, through both work contract and residency. If an employee is made redundant, his or her residency is cancelled.

It has been argued that the kafala is a way for the host state to cope with the vast numbers of non-nationals residing within its borders (Longva 1997) and that “…the kafala is a system of control [and] a way for governments to delegate oversight and responsibility for migrants to private citizens or companies.”

Strict visa laws. Lack of integration. Temporary residence permits. The sponsorship system. These are structural boundaries all migrants in Oman live within – but who are the migrants? How do they negotiate their way through the system? Where do they come from, and where are they going? What are their hopes and dreams?