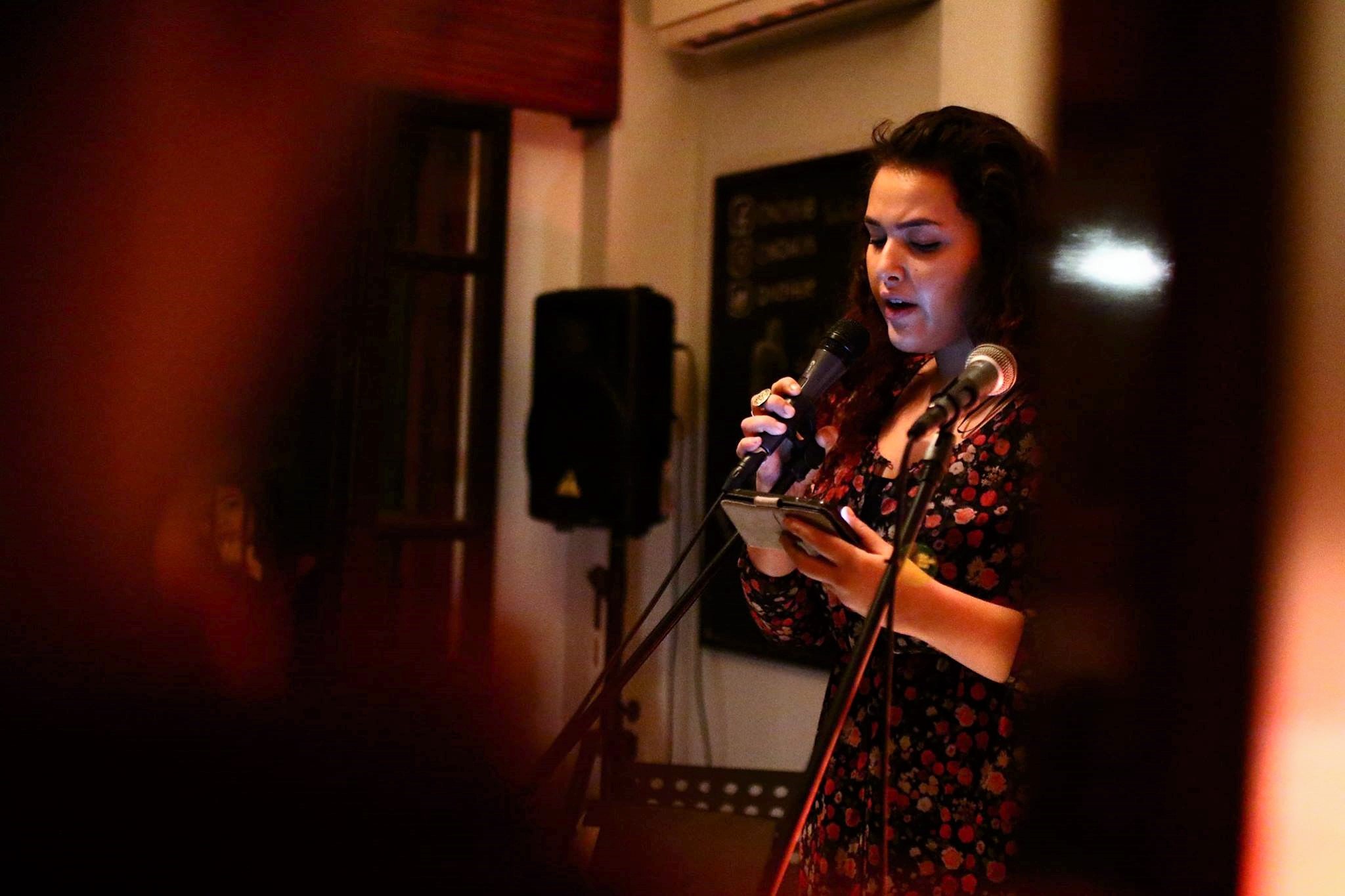 The story of Maysan Nasser sharing her experiences with Borderline illustrates very well what ‘Sidewalk’ is: a space for sharing subjects which are otherwise silenced.

On a Wednesday evening around four months ago, the Syrian-Yemeni poet Maysan Nasser stepped up on the stage at an open mic event in Beirut, called ‘Sidewalk’. Maysan was used to performing, but this night was an unusual occasion. It was the first time that she spoke openly about her Borderline Personality Disorder in front of a crowd and identified herself with it.

“It was such a cathartic moment,” Maysan tells. “I got up, and before reading my poem, I spoke about Borderline and the struggles it causes.”

The Borderline diagnosis is not broadly understood – neither among researchers nor in Lebanese society. It is often taken lightly, she explains. For this reason, Maysan was fearful that the audience would misunderstand her or perhaps label her as dramatic.

Yet, the reaction she received was support and acknowledgement.

Maysan remembers a woman who wrote her a message, saying: You are the bravest person I have ever met. “I still have that paper upon my wall,” she tells.

The story of Maysan sharing her experiences with Borderline illustrates very well what ‘Sidewalk’ is: a space for sharing subjects which are otherwise silenced.

It is now almost ten months ago, since Maysan went to Café Riwaq and proposed the idea of Sidewalk. She had been introduced to the concept of an open mic community in Paris, where she had studied psychology. In fact, she had been quite heavily involved in the Parisian open mic scene. As part of the organizing team, she even toured around Europe.

It is not that Beirut is unfamiliar with art and poetry. In fact, the city has always hosted a lot of poetry events. But as Maysan explains, these events were, in her view, too sporadic: “I missed the dependable feeling of a weekly open mic and the feel of a community,” she tells.

After a bit of persuasion, Cafe Riwaq agreed to give Maysan four weeks to test the concept.

She then contacted her friends who wrote and performed and asked them to join in and spread the word to others. The trial period turned out successfully, and since then, the basement room at Riwaq has been crowded with people every Wednesday night.

Maysan usually opens the stage and reads some of her own poetry. During the performances, there is always clapping, and the clapping is often accompanied by either laughs, tears or supportive statements.

According to Maysan, it is first this sense of a supportive community that makes Sidewalk a place where people dare to share their intimate thoughts and feelings. It might also have something to do with the setting, she adds.

Cafe Riwaq is a well-known cultural hub, which already provides a safe space and gathers people from all walks of life. Located in the basement of this hub, cut off from the street life, like a little cave, the sidewalk community becomes physically isolated into its own world.

“We are in a region that suffers so much, and I think we still struggle to understand depression as a valid source of pain. We tend to think: people are suffering much larger misfortunes. How can you be sad?”

Maysan has noticed that mental health is a huge taboo, which she is breaking at this open mic. In fact, several people came up to her after she had performed her first poem about Borderline Personality Disorder that night four months ago. They told her that they too suffered from a mental disorder, but never dared to tell.

“Mental health in our culture is not very well understood so far. Anxieties and depression are comfortably silenced in daily life,” Maysan tells. “We are in a region that suffers so much, and I think we still struggle to understand depression as a valid source of pain. We tend to think, ‘people are suffering much larger misfortunes, how can you be sad?’”

Topics such as sexual violence and harassment are underexposed in society, and the emotions caused by collective traumas like war, displacement and racism are as well suppressed, Maysan tells.

“To be honest,” she continues, “I think emotions are sometimes difficult to talk about in our community.” She gives an example with young men who are frequent on stage at Sidewalk: “They come up to express grief or sadness and all these feelings that, because of gender stereotyping, are not expressed in daily lives.”

In this sense, Sidewalk works as a space for healing, according to Maysan.

“Poetry does not only heal. It also shapes,” Maysan says.

According to Maysan, the young generation in Lebanon and the surrounding countries finds itself in an identity struggle.

“We were handed down so much from earlier generations, but they have little to do with what we are used to in our lives,” she says. This, she believes, leads to a dissonance between the parents and the youth. An example being the subject of love and relationships.

“With our generation,” she continues, “it just seems like there is a wider scope of things: be it sexuality, understanding who we are, the different types of relationships.”

At the time of writing, Sidewalk is growing. Starting with just Maysan, the project now consists of a team of around four members. They have launched a Sidewalk project in the northern city of Batroun and are about to start up another one in the southern city of Saida.

“The project is still too young for us to be saying that we have seen authors graduating from its stage”, Maysan says. However, it contributes with a space for people who are not performing at a professional level, she tells. It allows them to try out different things, to experiment and grow.

And maybe soon, the first books will be published out of Sidewalk. For Maysan herself, this is the case. Very soon, she is launching her first book, and this is thanks to the Sidewalk community who is pushing her every week, she says. The book is called “Don’t tell them“, and it treats the subject of – you’ve guessed it – taboos.

Hilel Garmi: “I will refuse to enlist in the IDF”

Meet one of Israel's latest refuseniks.