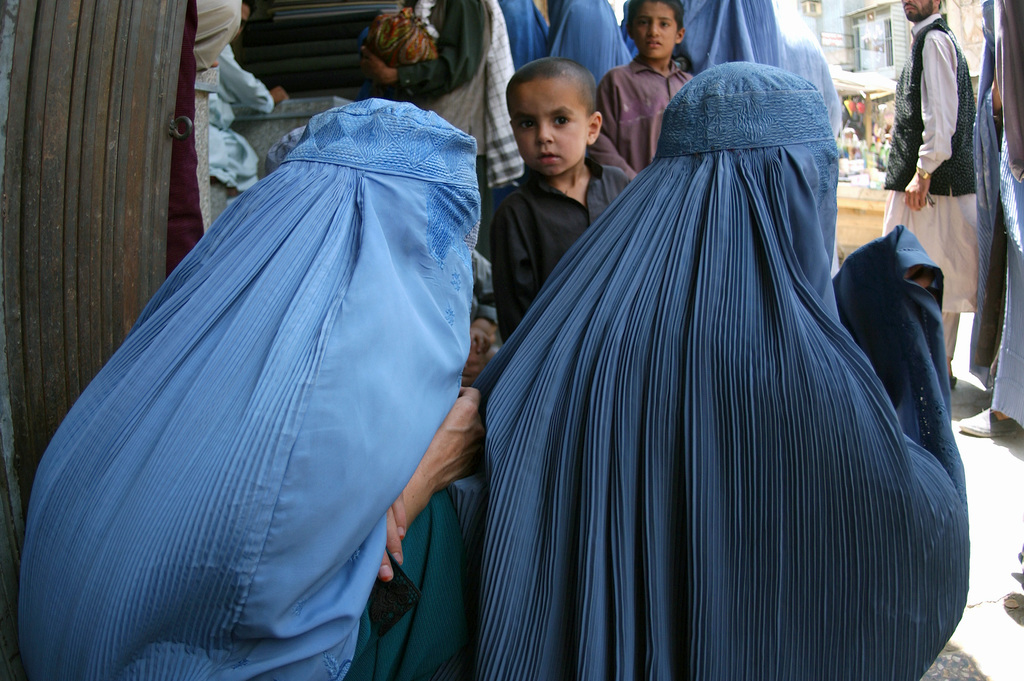 Two local, burqa-clad Afghan women sit on the sidewalk in Kabul, waiting for their families to finish their market visit. Via Picryl.com

I want peace but at what cost?

When the Taliban attacked Takhar province, the loud sounds of the gunshots felt so close; like they were hitting your body. I was very little back then. My dad carried me on his shoulders and my brother in his arms. My pregnant mother carried my sister in her arms. We were among a large crowd of people who had left their homes and belongings behind and were wandering the city to find a safe place to live.

We headed towards our district where we hoped we’d find some peace. Those who couldn’t afford to leave their homes chose to stay and face their deaths. They didn’t know when and from which direction a bullet might come and take their lives.

It was late at night and we finally arrived a village called “Meskeen” which was located in our district. We had no food or water. One of the residents of the village, who knew my father from before, brought us some basic necessities.

Tired from the trip, we, the children, fell asleep on the rocks. But my parents stayed up all night thinking about ways to keep us alive. By the morning, the Taliban had taken over the city of Taliqan and they were making their way to the districts. My mother decided that we should return home, but the Taliban were capturing, disappearing, and imprisoning men in local communities to prevent a rebellion. My father sent us home alone while he himself went to a different district.

“They didn’t know when and from which direction a bullet might come and take their lives.”

On our way to home I saw the terrifying Taliban. With long beards, black and white turbans, and eyes blackened with coal, they carried guns and whips. I hid under my mom’s burqa out of fear and sometimes I just closed my eyes.

Our shoes tore apart as we walked on the roads full of rocks and gravel. Eventually, my brother and I were forced to walk barefoot. When we arrived home we noticed the blood and the wounds on our legs. We hadn’t noticed our wounds and cuts because of the intense fear we felt as we made our way home. We couldn’t walk for a few days.

Soon the Taliban took over most of Takhar’s districts. They destroyed the homes of anyone who dared to protest or retaliate. They did anything they wanted: tortured the residents, killed the men, and raped the women. The torment seemed never-ending.

My father secretly returned home after a long time. Unbeknownst to us, some of our neighbors had informed the Taliban of his arrival. One early morning, the Taliban arrested my father and took him to an unknown place. We couldn’t do anything but to worry and shed tears. Any effort to search him was a crime on its own. Two days later, my father returned. He was tortured so severely that he wasn’t able to talk to us. His eyes spoke of the pain he had endured. He was under treatment for four months but his health never recovered completely. He still hasn’t recovered from the trauma.

“I hid under my mom’s burqa out of fear and sometimes I just closed my eyes.”

The Taliban would enter local homes every morning while people were asleep. They would search people’s belongings for anything they deemed un-Islamic and ask them where their men were and what they were doing. Most of the men in the families had either fled to Iran or to different districts (Rustaq, Chaah Aab, Yangi Qala, Dasht Qala, Khwaja Bahauddin). The women bore the brunt of Taliban’s brutality; they had to run the house and save the rest of the family from sickness and hunger. They had to go out to buy food and other necessities from the few shops that remained open but they were not allowed to leave the house without a male chaperon. Many faced the whips of the Taliban simply for going out to buy groceries for their hungry children.

Worse than this was when the Taliban would force young girls to marry them. Many families had to marry off their young girls to close relatives out of the fear that they’d be taken by the Taliban. These girls are still suffering. Many still face violence in the homes they were forced to marry into.

I support peace, but at what cost?

How can women, who have earned some freedom in the past seventeen years, accept this peace agreement between the United States and the Taliban? Do you know that the little freedom we have as a people has cost us the blood of thousands of people who believed in civil values? If we want a permanent peace, then we must understand the implications of this agreement. Afghan citizens, including women and young people, are not present in these talks, but we have the most to lose if they are not inclusive.

We are at risk of losing the freedoms we have earned through blood and sacrifice because of the haste of the United States and the ineffectiveness of our leaders.

This entry by Gulchehra Begum was first published on Free Women Writers. A version of the article is published by The Turban Times with permission.

Possibly a game changer in the Israeli elections.