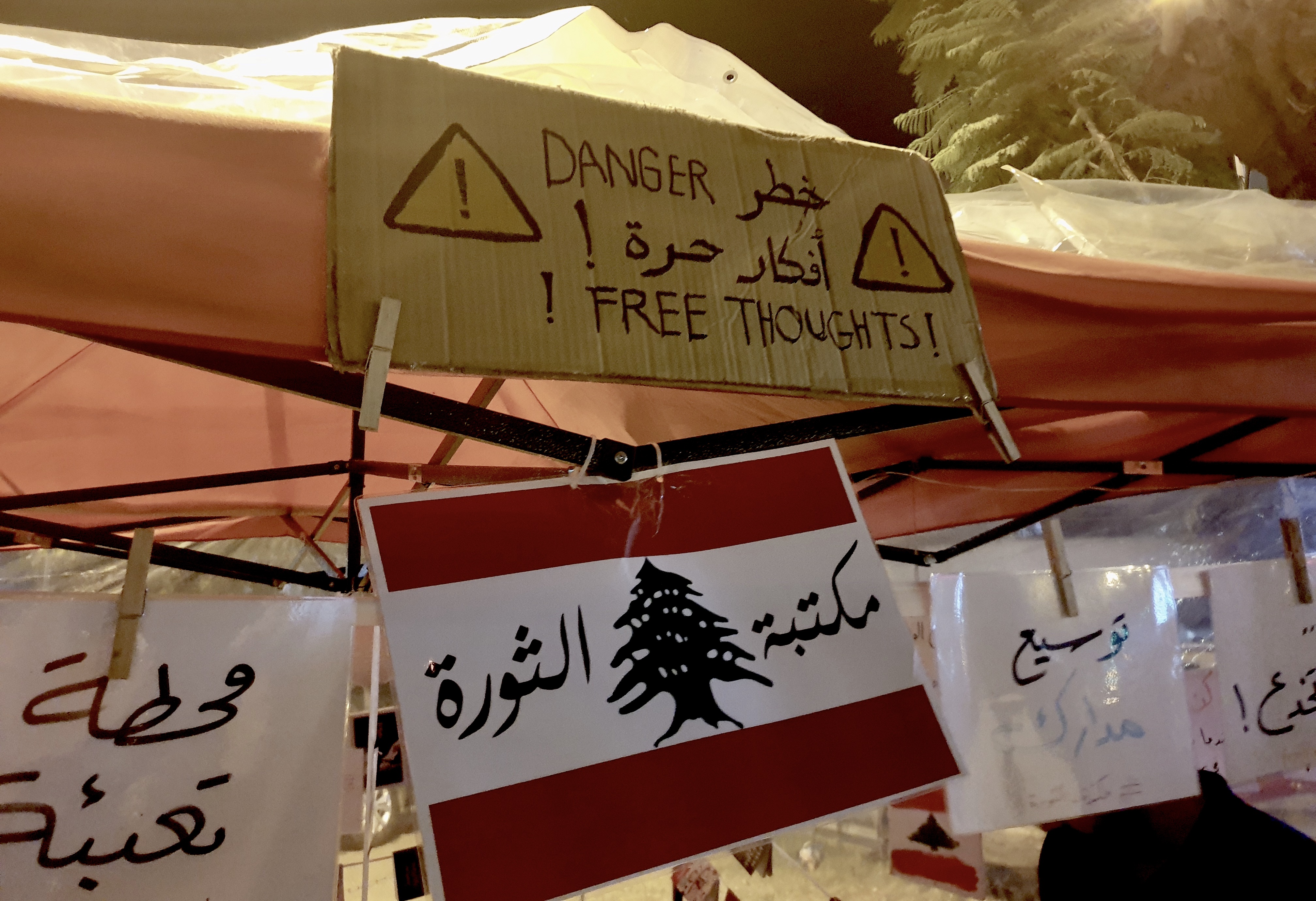 LEBANON PROTESTS: Since their government announced new tax measures on October 17, Lebanese people, across all sectors of society, have taken to the streets in nationwide anti-government, anti-corruption protests. In a short series, we present three interviews with young, active Lebanese participants who share their perspectives and experiences from the protests.

Wissam Tayar (26) is from Tripoli in Northern Lebanon where she lives with her parents. She works daily as program manager at a human rights center in Beirut. Wissam invited us into a newly opened library, organized in a tent by her and a couple of her friends. It’s placed on a strip of grass in the middle of a road right next to the ‘Sahet al Nour’ main square in downtown Tripoli. It is Saturday night. The square is full of people, 3 weeks into the protests that’s been going on nationwide since October 17.

Wissam: The uprising started in Sahet al Nour Square, Thursday the 17th of October at night. First, I was oblivious of what was happening, because I was still on my way back from work in Beirut. When I arrived, my mom was worried sick about me making it home. I thought to myself, “What is happening?” I opened the news on TV, and what I saw was beautiful, to say the least. My mom is a revolutionary woman and she was even more excited than me to go down to the street and be there in this historic moment. We actually went behind my father’s back. So at 1am I was in the middle of the square with my mother. We would never do something like that usually. We held a banner and were witnessing what happened at the square. People were burning tires and chanting beautiful slogans like, “Asshaab yuriid iskqaad alnizam”. It means: “The people want the downfall of the regime”. A few minutes after we arrived at the square, people climbed up and tore down posters of politicians. Normally such an act would make supporters of different politicians fight each other, but that did not happen. At that moment we felt that it was true, it was a historical moment and there is no going back. People were chanting and I heard someone saying: “At last we are destroying the pictures, they are not Gods, they are just corrupt politicians”. It was beautiful.

What is warming my heart right now is the energy here that we have not seen before. The place we are at now is a small grass area in the middle of a boulevard that no one used. Now it’s filled with tents and groups of people that are trying to have beneficial discussions and fruitful meetings. Here, we have tents for teachers, for people who want rights for people with special needs, for students, and for every small club that wants to be represented. Sahet al Nour is actually the place where we broke several barriers at first. And we are still doing that. People are dancing to the DJ’s beats. It’s unbelievable. Sahet al Nour is considered to be the conservative part of the city. You would never have dreamt of people dancing in this square, or to see that much joy. A friend yesterday said: “We have created a group therapy in the square”.

“At last we are destroying the pictures, they are not Gods, they are just corrupt politicians”

I would say the uprising is an accumulation of several reasons, concerning our fundamental rights as citizens: years of corruption, economic grievance, rising poverty, unemployment, the corrupt education system. Really, we do not have our basic rights – because of the very obvious corruption. There has been a privatization of several sectors like the health sector and education sector. We have politicians, party members, and presidents who have shares in private universities or private schools that are intentionally not supporting the public sector to push people towards their own interests. This goes for the health sector as well. Not to mention the worst of it all – the warlords who are controlling this country and have been for 30 years. Lebanese society is being dismantled because of economic grievance and misgovernance. Let’s put it this way: The politicians hit the surface. People are starting to become more aware. Especially my generation, the 90’s and onwards, because we were not involved in the sectarian scene in the civil war. We are more aware of what we can have as citizens, of what the politicians are not doing; their inefficiency and their corruption. I think the collective awareness of people here highlights how the situation is not bearable anymore.

“We are more aware of what we can have as citizens”

At the end of the day, we have had this same way of ruling for 30 years – and it is not going to go away in one day. It will need time, it will need a lot of reforms. I believe we do need the frame or the figure of the state. So far, we made the government resign, because of the protests. The government was responsible for implementing certain programs, and they did not do their job on this. But in my opinion, we can’t bring down everyone at the same time. I hope we will focus on legally achievable things such as activating healthcare, more support to education, working on a new electoral law, and by pressuring our representatives in parliament to actually go forth with that. I don’t think the people are ready for early elections. I think we should hold that off and instead work towards implementing and activating what we have already, start holding everyone accountable, and work on the economic system that is the root of our problems here in Lebanon. This, I think, is our cornerstone, the first step in a very long journey.

The tent we are in front of now is a library. It is an initiative that my friends, Nermin, Yahya, Sami, and Shady, and I started 10 days ago. At the beginning of the demonstrations and the revolution, we were physically involved and very motivated. But when the government resigned, we fell into this low morale zone of anticipation, asking, ‘what’s next?’, ‘how far can we go?’, “will anyone actually stop at this point?” We became a bit frustrated and started to brainstorm on how we could be useful here in the street onward. Because we knew that at this point we wanted to really stay in the streets until we reached a certain level of our achievable goals. At that time, we just brought our tent because we had several days of pouring rain and wanted a place to stay in the street. And then we thought of the “revolution library”. We don’t have a public library in Tripoli at all, so the idea was to create a place where you can come and just read at peace, free of charge, without needing to buy coffee, and have discussions with like-minded people.

The revolution library has become a space in which we share books that are directly or indirectly relevant to the context of the revolution. The legal perspective, the constitution, other revolutions like the Arabic Spring, and self-development as well. The tent is now full of books – our own and books gifted to us by friends, but also by other people who came by with reads that had previously inspired them. We are trying to make it as colorful and comfortable, while maintaining the luxury of having a place that is not controlled or focused towards anything. We are just regular citizens that are trying to create a space where we can be ordinary and bring our own point of views closer. We are trying to have casual, spontaneous-ish discussions on these topics. Especially on the Lebanese constitution, on how we can protect ourselves and our country in this period and manage it better. That is what we are trying to do, on top of just reading books that might enrich and grow our own perspectives. We have recently included kids, to get them along in what is happening and start raising their awareness.

A new feminist movement in Tripoli

I never joined a protest before. When I took to the streets on the 17th of October, that was my first time. What really motivated me to go down to Sahet al Nour Square that night was the idea, that if we came down, maybe more women would be motivated to join. The feminist scene here, especially in Tripoli, has until now been very shy because of the more conservative nature of the community. We did not have strictly feminist activities, hubs, spaces, or movements. And I wanted to be part of this, because you can feel it, you can feel it’s a historical moment. I certainly feel it. Many women have joined and we have come to see how big our role is. We are here and we should be here. Whether it is for representation, for reforms, for the fabric of the community, or to protect the movement in this revolution.

This revolution has made women more outspoken. We have our small revolution at home, with family, stereotypes, and the community. I can say for myself and my girlfriends that we are standing up for ourselves more. I think we have restored the faith of changing this social construct that has been holding us down and marginalizing us for years. The revolution has had many layers. It’s been very empowering. Now I am putting everything on the table, personal stuff that I have been holding in for several years, actually believing that even things that have been normalized can be changed.

Sofie Bervild Nielsen is a visual anthropologist currently based in Copenhagen. The focus of her research especially concerns dissidence, forced migration, immobility, and digital infrastructures.

Iben von Holck is a Copenhagen based anthropologist by formal education, working critically with urban space and architecture.

"My mom is a Palestinian and I cannot wait to get rid of her."