Mass demonstration against the regime of Gaddafi in Bayda, Libya. 22 July 2011. Photo by ليبي صح is licensed under CC0 1.0

The story of Jamal Muhammed

“The revolution is very clear in my eyes. When I saw it begin in Tunisia, I knew that was my chance, that was our chance, Libya’s chance. The streets were very quickly filled up with tired and hopeful protesters, who all had one goal; to get rid of a 40 year old long dictatorship.”

Jamal Muhammad Al-fitouri is now a 53-year-old man who has spent most of his youth fighting against the Gaddafi regime. He was a part of the “National Front for the Salvation of Libya (NFSL)” in 1981, a political opposition group against the Gaddafi regime which sought to achieve a government that stood for liberalising reforms – such as democratic elections, a free press, and the separation of powers.

To become able to fight the Gaddafi regime, Jamal got military training among with hundreds of young men, during their time in NFSL. The training took place in Sudan, Iraq, Egypt and Algeria. They tried many times to get rid of the regime, but with no luck.

30 years after, a miracle happened. The people of Libya finally got what they had been waiting for in a long, long time; The Gaddafi regime was now gone. But this didn’t happen easily. Many people had to suffer and sacrifice to make this happen – and one of them was Jamal.

“Democracy takes times. Libya is like a little closed flower that just needs time to open up and bloom”

The story of Mummar Gaddafi’s fall has a lot to do with the cruel prison called “Abu-Salem”. In this prison, one of Libya’s worst massacres took place. In June 1996, a prison staff brutally killed around 1,200 prisoners because they complained about the conditions in the prison.

This place became Jamal’s home for over 6 months.

“I got arrested the 20th of February only a few days after the revolution began. We knew for the second the revolution began, that this could impossibly become a peaceful kind of revolution, when Gaddafi started shooting peaceful protesters, so we had to get weapons, if we wanted the people of Libya to survive. I was meeting with a man who was going to give me some weapons, when I saw around 10 of Gaddafi’s soldiers coming towards me. They took me in and started question me. The head of the interrogation center asked, with a sarcastic voice, “Do you think you are going to make a revolution?  HA you are dreaming!”. Suddenly they took me down to the basement to torture me, and then 6 months of hell began.” 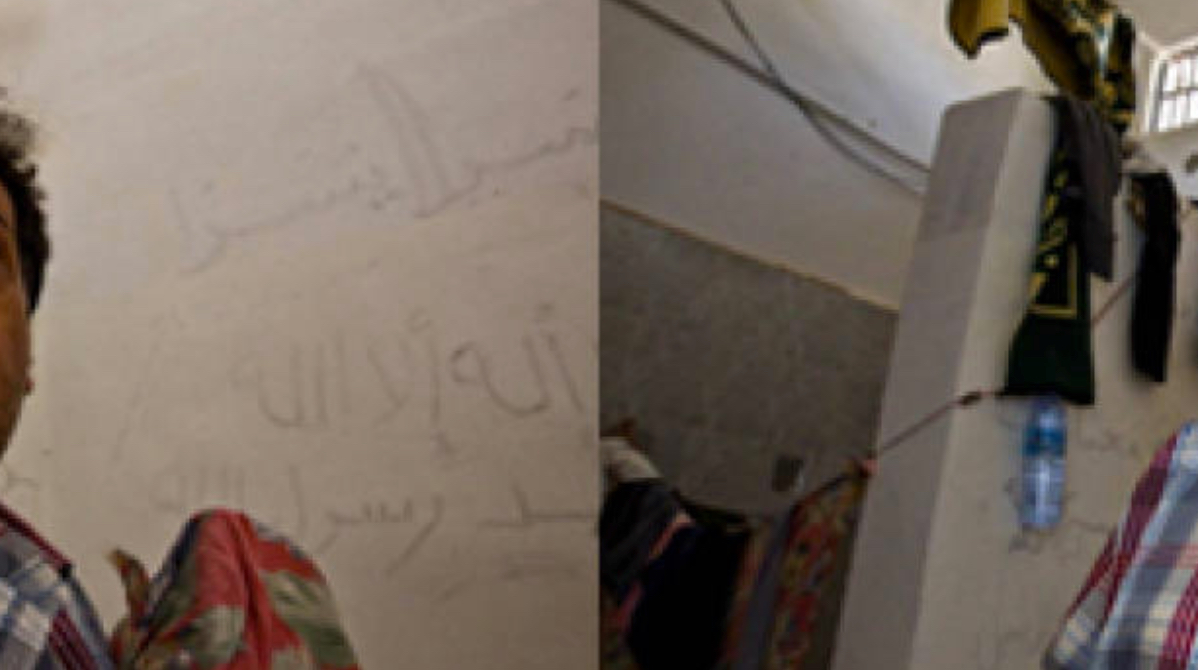 5 days before Jamal got free he found a pen which one of the guards had lost. He took it and wrote on the prison walls; “The falling down of Gaddafi! “Don’t worry, God is with us. God be with us.” Photo credit: Flemming Weiss Andersen.

“I was blindfolded, when they took me down to the basement. They began to whip me. It didn’t take long until I was unconscious. And then they poured water on me, to wake me up. After that, the whipping started again. When I woke up, I found my self in a little cell, and that’s all I remember this was the first part of the long tortures.”

When you see how Libya is now, do you regret everything?

“No, never! I would never regret it! Democracy takes times. Libya is like a little closed flower that just needs time to open up and bloom. When it does that; everyone in the world, will see how beautiful Libya is and that day will come, it’s just a matter of time. We sacrificed, so the next generation can have everything we didn’t have. My small children will hopefully be able to discuss politic in school and vote and have freedom, and that all that matters.”

Will Lebanon have a new president in 2016?

Leader of the Christian ‘Lebanese Forces’ party has endorsed Michel Aoun in the presidential elections.