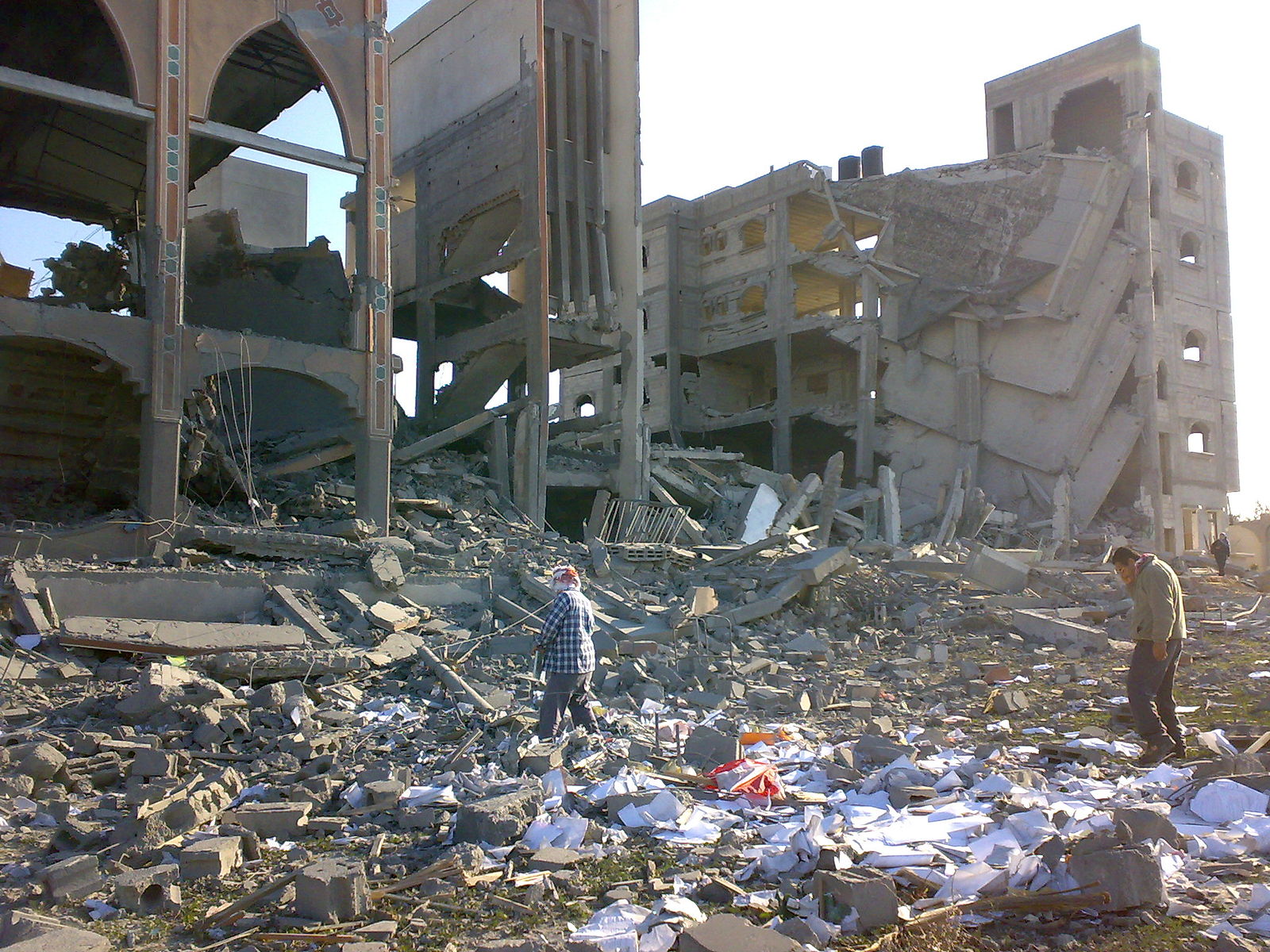 Dar al-Fadila Association for Orphans, consisting of a school, computer center and mosque in Rafah serving 500 children, were destroyed by the Israelis during Israel's assault on Gaza. Photo by International Solidarity Movement is licensed under CC BY-SA 2.0

Competitive grief in Gaza: How Hamas and Fateh show sympathy to evade responsibility

A sleepless night after the shadow of death reaped the souls of three angels while Gaza was, as usual, swamped in darkness.

Yosra, Rahaf and Nasser Al-Hindi, three siblings, were burned to death in their house in Al-Shatti refugee camp, the poorest neighborhood in Gaza Strip, after, according to their bereaved mother, having a remarkable day at the Gaza seaport, one of the few places left for fun from the latest destruction of the besieged strip. “Macaroni, it was the last thing Rahaf asked me to make when we returned from our picnic,” their mother said. “I saw them burning before my eyes… I couldn’t stop it,” she said in a crying voice. As for the afflicted father, his words were, “I will never forgive whomever contributed to increase such suffering”.

According to the Civil Defense, three kids died and one was injured and moved to Shifa hospital to receive medical treatment after the house caught fire because of a candle that was inadvertently left in the children’s room, where electricity is barely available these days.

Saturday morning witnessed a contest of accusations between Hamas and Fateh. Officials from each sidedesperately attempted to throw the burden on the other and hold the other accountable.

House Fire Kills Three Palestinian ToddlersThree toddlers burned to death in Gaza after candles set fire to their home. Some are blaming the ongoing electricity cuts for their deaths.

To evade blame, Hamas hastened to embrace the family with a formidable presence of armed Qassam combatants. They escorted the exceptional military funeral that Hamas organized for the three martyrs. Former prime minister and Hamas leader Ismael Hanyia was in the front line. He gave a heartfelt speech commiserating with the father, and blaming the PA for the entire misery of Gaza.

In a press statement, an Islamic Jihad spokesperson said, “We are all responsible for the tragedy of the Hindi Family.”

Elsewhere, a penniless 33-year-old Gazan died, unmentioned, after committing suicide in Jabalya yesterday, while another 18-year-old Gazan attempted suicide yesterday and was transferred to Shifaa hospital in a critical situation, also another Gazan put himself on fire today but he was successfully saved, well they draw any attention?

In a public relations maneuver, Mahmoud Abbas adopted the al-Hindi family and pledged to sponsor all their needs, Abbas assigned the task to Gaza mayor Abdulla Efranji, to follow up on the medical treatment and house reconstruction of the afflicted family. Abbas later phoned the father to deliver his warmest condolences.

The day ended with a phone call from the Prime Minister of the Unity government, Ramy Hamdolla, to the victims’ father. Hamdolla said he’s going to send him about $3,000, pledged to grant the family a better apartment in the government’s construction program, and gave orders to immediately send the injured son to receive medical treatment in Israel at the Palestinian government’s expense. The father therewith thanked President Abbas for his support, and blamed both the Gaza power plant and Hamas for the entire problem.

Controversial Azhar University professor Khadir Mihjiz, condemned the political exploitation of the incident, and said that only the parents should be held responsible for their carelessness, and should appear in court and be convicted for “Involuntary manslaughter”, citing neighbors of the afflicted family reiterating that the parents were always careless about their children, “always left them to play in the street, including the infant”.

However, yesterday’s morning, Hamas put up a huge signboard in the most crowded square in Gaza blaming Abbas and his prime minister for the entire thing, saying “Our blood is on your neck.”

Amidst, all these clashes Israel passes blameless for everything.

Also, yesterday’s morning witnessed another similar accident, wherea caravan (temporary shelter) caught fire in Kuzaa, with no injuries reported.  But, seemingly, the poor householder won’t be bribed as was his Gazan idol, since he barely drew attention.

Hopefully, it won’t turn into a routine amongst desperate Gazans, to set their homes on fire to get compensated.

Personally, I think that, instead of bribing the poor guy, it would have been a lot easier if Ismael Hanyia gave him some of his inexhaustible electricity. Local Gazans call his house “Madina El Monawara” (The Always-Lighted City) due to the huge electricity generator that provides lighting to his entire area. Or, maybe, it would have been easier if Abu Mazen’s so-called austere government exempted Gazans from heavy taxes and stopped sucking their blood.

The views expressed in this opinion are the writer’s only and do not represent those of The Turban Times.

This story by Muhammad Shehada originally appeared on the website normanfinkelstein.com. A version of the article appears on The Turban Times.

Israel, Palestine, and the reality I didn’t know

Perhaps I would have felt better, if I had just looked the other way. But that would have been the...