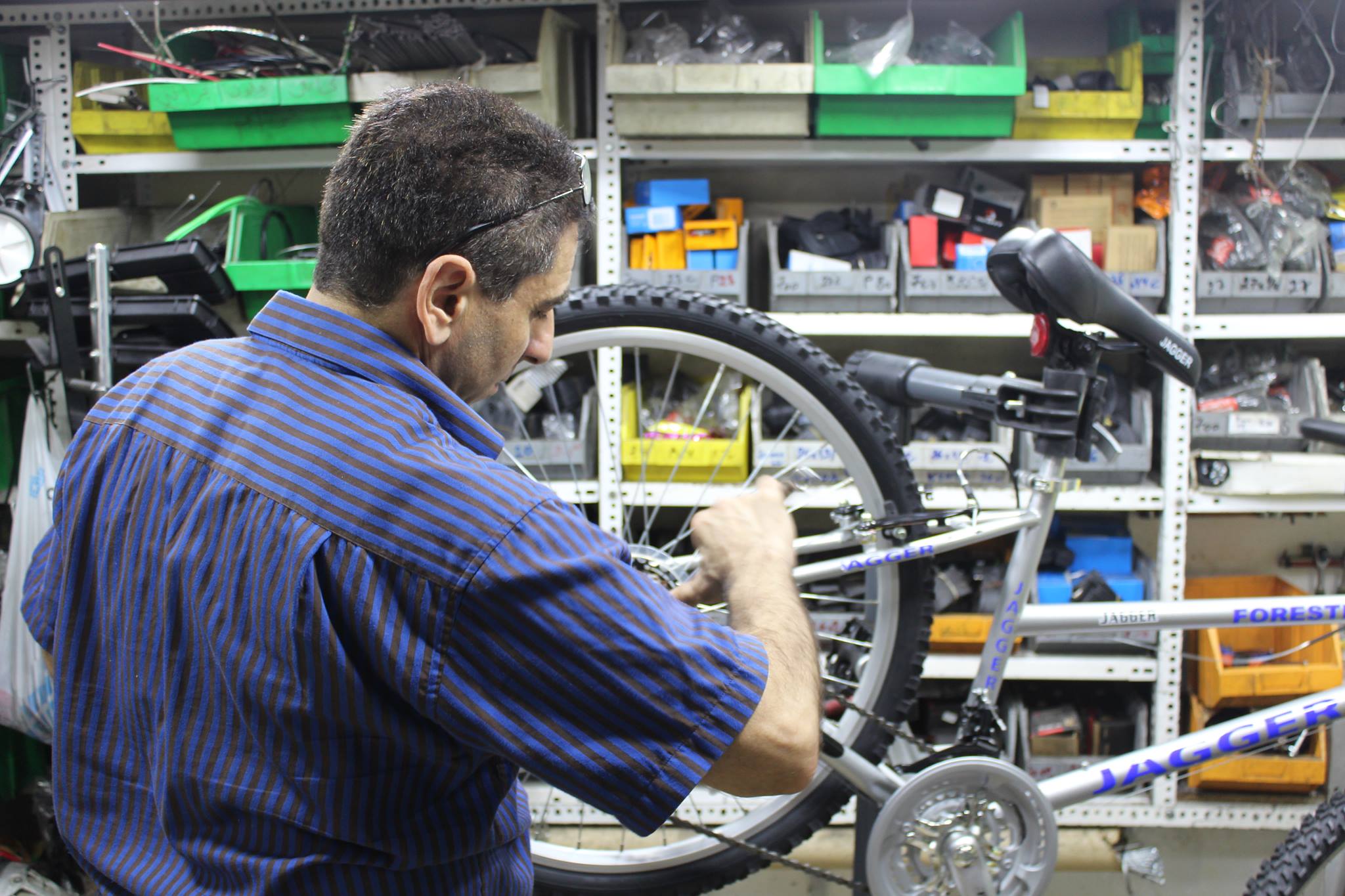 Noubar Korjikian owns a bicycle shop in the heart of Beirut. Since 1985, he has witnessed how his business has been shaped by civil war, corruption, garbage crisis and student movements. The ups and downs of the bicycle culture is a reflection of society, he says.

Noubar had always had a passion for cycling, but he never pursued a professional career. Not until one day in the winter of 1992 where he decided to take his training seriously. It was just after Christmas, and the weather was bitterly cold. Since he was busy at work, he had to get up early to train. At three o’clock in the morning he warmed up, and at half past three, he was in the saddle. Beirut’s chaotic traffic usually leaves poor room for cyclists, but in the early hours before the day began a stretch of the city’s main road was free of cars. And here Noubar rushed around for two hours. All alone. Coach and teammates were unnecessary. All he needed was a book by his idol Greg LeMond, former world champion and triple winner of the Tour de France.

Four months after he began training, Noubar participated in the Lebanese road cycling championships and won. At that time he took five hours to complete the distance of 180 km, he says proudly.

The passion that made Noubar get up before dawn to train, was also the driving force that led him to start his life project; the bike shop, Cyclosport, in the heart of Beirut, located a few hundred meters from the bustling nightlife district Mar Mikhaël. The shop opened in 1985, and was initially run by Nourbar’s father as a side business. When Noubar later took over he decided to make it his full-time profession. He also began to gather his friends and acquaintances for cycling trips around Lebanon’s curvy mountain scenery and supplemented his bicycle sales with rental and excursions.

There are numerous bike stores throughout Beirut, but only about 15 are as large as Cyclosport, Noubar says. “Cyclosport is good business”, he adds humbly. And so it seems to me as well. Even now at nine o’clock in the evening the shop is busy. A group of about twenty people are on the weekly guided ride around the city, and customers are seeping steadily into the store. As soon as the door opens Noubar rushes up the stairs from the small backroom whose walls are hidden by plastic boxes with screws, tender safety, gears, and chains. “Where were we at?”, he says afterwards, and continues his story, while securing the handlebars on a blue racer bike.

Cycling began with the Civil War

The business conditions for a bicycle shop in Beirut are unpredictable. The bicycle culture is inextricably linked to Lebanon’s history and politics. What happens in the parliament, leaves its imprint on Noubar’s accounting. And this is precisely the reason why Noubar’s history is not just a story of a man who sells bicycles, but a piece of social history reflected in a bicycle shop.

“The history of the bicycle culture in Lebanon began with the Civil War, which lasted from 1975 to 1990”, Noubar tells. The 15 years of fighting was hard on Beirut, but paradoxically it was the devastation that got the townspeople to start cycling. The many road blocks freed space of the soft road, and the lack of gasoline led people to look for alternatives to their cars.

At the end of the war, a third of Beirut lay in ruins. At the time, the Prime Minister, Rafik Hariri, launched an ambitious plan to rebuild the city centre. The ruins were demolished, and foreign architects were commissioned to draw skyscrapers and fashionable city mansions. But before the new quarter was built, an area in the middle of the city lay as a bare area. There were no roads, only gravel and concrete. It was like a playground for bikers, Noubar tells. “People stood in line over there for hundreds of renting bicycles, which they could use in the construction sector”, he says.

“Why don’t you rent your own piece of land?”, a friend of Noubar’s one day asked. Noubar immediately saw a business opportunity and rented a bite of the no man’s land of about 5000 m2, which he converted to a bike park. The area was right down by the harbour, with a beautiful sea view. People would come and cycle, while they watched the sunset over the sea. He had the area for six years.

The political and social barriers

Noubar lost his bike park in 2006. According to himself, he was a victim of the corruption and sectarian discrimination, which permeated the grandiose reconstruction project. Suddenly one day he received a phone call from his landlords who told him to be out of the area in the course of a week. Otherwise he would be exposed to things he did not want to know the details of, they said. Noubar was never told precisely why he was given a tenant notice. But he is convinced that the landlords had found someone who was a Sunni, and thus belonged to the same sectarian group as themselves. Christians like Noubar are increasingly discriminated against, he says. But sectarianism is not the only challenge. Noubar sees himself as a man who in many ways is working against the odds.

“Generally, politicians are not happy about cycling”, he says. The reason is the high tax on gasoline. If people start using buses instead of private cars the state loses an income, and this is why politicians are not interested in building bike paths or invest in public transport. There is no metro or lightrail in Beirut. The city buses are old rusty wrecks used only by workers and immigrants, Noubar explains.

Recently, a new challenge has arisen. Lebanon’s waste is stalled, and it has led to mountains of trash growing up in the city’s suburbs. “Because of the waste crisis, I have not cycled for six months,” says Noubar. “Osen from the cars get used to, but the stench from the garbage in the city’s suburbs is unbearable.” He understands why good too, why many refrain from bicycle hire him for the time. “How can I encourage people to cycle, when the city smell so much that I can’t even ride?“.

Bicycle culture and the new Beirut

It is now ten in the evening and the group on tour is back after two hours in the city. They take off their bike helmets and reflective vests. There is barely room for cars on the roads, and yet, miraculously, space is created for groups of up to 30-40 cyclists, departing every Thursday from Noubar’s store. Most of those who rent bikes are students, Noubar says: “Many come to rent bikes in the evening when they have time off from lectures. They come for pleasure, it is a leisure activity for them.”

I fall into conversation with two girls who have been on their first bike ride in the city. “Something is changing among young people in Beirut when coming to transport”, they say. A political project has put cycling on the agenda for the local elections in Beirut. The project is called Beirut Madinati (Beirut, my city) and consists of young people aiming to make Beirut sustainable and green. Young people have also started grass root projects to inspire people to bike. Among other things, an art project where street artists painted bicycle motifs on walls around the city.

It is the young students that make cycling a trend, Noubar agrees. Since the green movement has emerged, the demand for bicycles has risen. But still, there is some way to go before the bike becomes a common household item, he admits. Social barriers still prevent older Lebanese from cycling. In a country like Lebanon where large cars generate respect, the bike is not a particularly attractive vehicle. “Cycling is associated with the lower classes, and many in Beirut believe that cycling is for children.”

It takes a persistent fight to open the Lebanese’s eyes for cycling. But Noubar is ready to take up the struggle. In his latest project he seeks to inspire families to biking. Every Saturday and Sunday the schoolyard next to his business is turned into a bike park. Many parents take their children to play there, but often the parents come into the store and rent their own bike. “I think I am one of the first in the world to have made a bike park in a schoolyard,” Noubar says with the same pride as when he talks about his championship in road cycling.

Thousands of Kurds were killed and another 100,000 were forced to flee from Saddam after Iran, US, and Israel withdrew...