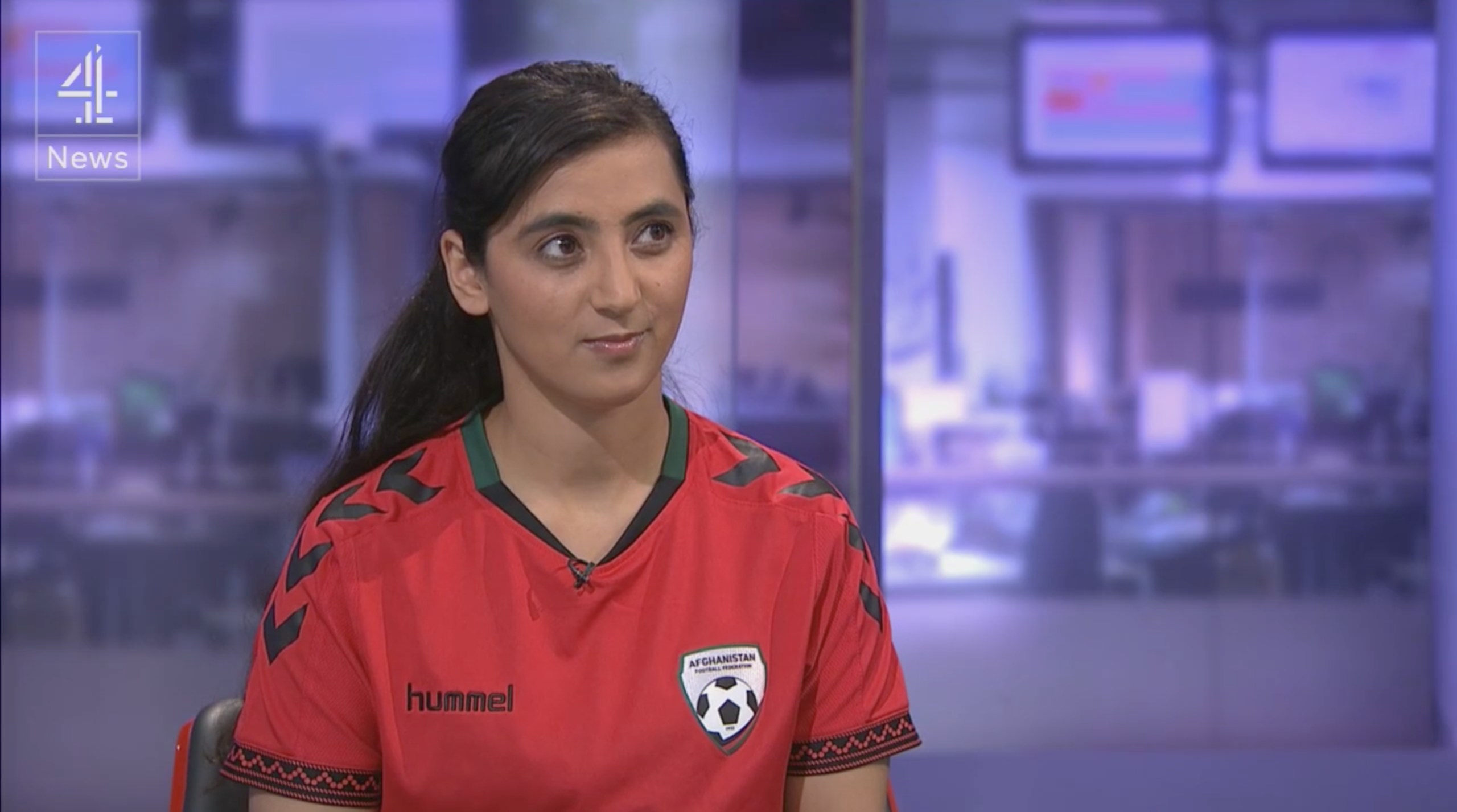 Screenshot of a Channel 4 News interview with Khalida Popal.

”They threw stones at us”

An exclusive interview with Khalida Popal, the architect and former captain of Afghanistan’s women’s football team.

Where did the idea and courage to create Afghanistan’s first national female team come from?

I saw see the anger and frustration in the eyes of boys and men, whenever they saw me playing. They, for some reason, got frustrated by watching a girl play better and more confidently than their own sex. In their view, women should stay home and definitely not play in front of a crowd. I felt like I wanted to bring about change and something new to Afghanistan. My goal therefore became to establish Afghanistan’s first female national team, which my country really needed. A lot of Afghan girls and women are very ambitious and want to achieve amazing things, but are prevented of doing so, due to the rules and traditions in Afghan society.

I started searching for players around the country I could recruit. But to do that, I would first have to explain and persuade the parents to let their daughters play; a task that came with much difficulty. Many girls wanted to play, and were talented as well, but their parents wouldn’t accept it. I met a lot of resistance in this process. Some of them sweared at me to my face and told me to get out and never set my foot inside their house again. Fortunately, I also visited parents who were very well aware that it could result in them and their daughters being isolated from the rest of the society, but understood the importance of having their daughters play in the national team.

And then finally; Back in 2007, we managed to gather a team and got to play matches in Pakistan, Jordan, and trained in Germany as well. I’ll never forget the time we played one of our first matches in Afghanistan. The crowd actually threw stones at us, shouting nasty things and wanted to stop our match. Some of us got hit, but we didn’t let them affect the game. It was harsh to see how some people in Afghanistan, out of all the countries we went to, didn’t support our team and our vision. Now, it was no longer a matter of choice, but a matter of duty to take the female football team to the next level. Over the past few years we’ve played in different leagues and international competitions. We’ve grown and learned by our mistakes and fight hard to become better every day.

In a country where there are strict rules against women, how did you manage to break the pattern and play football?

That’s a good question and I have a really good answer to it. You see, I’m the only girl among my siblings. I grew up with my brothers who were fanatic about football. They taught me how to play with a ball and I loved watching matches with them. I lived with my family in a village near Kabul and we had a quiet and simple life. Football was, and still is, an important thing in my family. When my brothers and I played outside, some of our neighbors were surprised that a girl could play among boys. It didn’t affect my parents nor my brothers, they rather encouraged me to keep playing and told me to ignore all the negative talks. We played a lot through my childhood, and thanks to my brothers, my passion for football started in a young age.

It was unusual for girls and women to exercise in Afghanistan. Football, specifically, was forbidden by the society. Nonetheless it became a part of my life and I would play very often. Unfortunately, this was not the case for a lot girls, who weren’t as lucky; Their freedom is limited in every manner.

In my teenage years, this sports game became something else than just playing with a ball; I played for the right of every girl and women, to play and choose their own life. Football started to play a big role in my life. Here, I could in some way expres my anger and my opinions, by playing for women’s right. I realised that it wouldn’t be easy, but I continued playing and learned by time how to overcome; I was motivated and strengthened by the fact that I was not only playing for myself my own rights and freedom, but for millions of others.

What reactions have you met from men in your society, throughout your career?

Some years after establishing and being a part of the women’s national team, I got a job at Afghanistan’s Football Association, in 2009. As I at this time had some problems with my knee, my new workplace as a program director was perfect for me. It was a new step in my life. I became the first female employee in the history of Afghanistan’s Football Federation. I clearly remember the reactions from men who saw me working. They confronted me and were desperate to know why the administration chose a female. For them, it was not normal to suddenly work alongside a woman. They insulted me, some of them even became violent, and I received death threats as well. The main focus in the office was on me. The men felt dishonored by talking to me and asking me questions. Many of them refused to get their paychecks from my hand. It was against their honor.

For a long period the harassments continued, but I worked hard, despite everything, and am happy to reveal that today, many women are actually working in the federation side by side with the opposite gender.

Is there a bright future for the women’s national team?

Our team was and still is controlled by Afghanistan’s Football Federation who was struggling and had difficulties getting sponsorships due to the controversies in the country regarding the national women’s team. I really wanted to sign a contract, because the national team needed clothes to play in, so I sent emails and contacted many different sports brands. It was a big surprise, when Hummel answered. We agreed to sign a contract, and a couple of years later, we designed a new hijab uniform together. A new era began, when FIFA allowed soccer players to wear hijab back in 2014. Women in Afghanistan can’t play with the regular football uniform because it doesn’t cover up the whole body. The traditions and religious rules do not allow them to. Thanks to Hummel, many girls today have the possibility to play football and fulfil their dreams.

Working as a program director and founding the women’s national team had severe and serious consequences for me. In the end, I had no other choice than to leave Afghanistan with my family, because our lives would never be worth continuing in the motherland. A new chapter started for me here, a continuation of the previous one; I’m now able to do the work I always wanted to for my country and the national team, directly from Denmark.

I believe that we can expect more changes and reformations slowly from within Afghanistan because of our new generation who, I believe, desire and require a modern Afghanistan.

“It is better to die, than to live in such injustice”

Morocco: What looks so good from outside of this “pretending nation”, is a bit rotten once you search just a...