During the siege, a Grad missile landed in the foreyard of this family’s home. A two-year-old boy was struck in the head by a fragment, but survived. Photo by Florian Elabdi

After more than six years of battles, the Lebanese Hezbollah movement has risen from the dust of the Syrian quagmire as the biggest winner of the conflict and this week their leader declared victory. We tell the story of how the Shiite militant group has established a future stronghold on Syrian soil through internal discipline and alliances with local militias.

ALEPPO REGION — The heroic portraits of Syrian president Bashar al-Assad are gradually reduced the further north you drive from Aleppo. The red, white and black colors of the Syrian flag are increasingly replaced by the yellow and green banners of Hezbollah in the war-torn landscape. At this point, the characteristic face of president Assad hanging on every lamp post is substituted by the face of young men who have lost their lives fighting for Hezbollah in Syria.

For three and a half years, the rural towns of Nubul and Zahraa were under siege by the surrounding villages. While their Sunni neighbours supported the uprising, the two small Shiite towns stood on the side of the regime, fearing the increasingly sectarian outlook of the rebellion.

The story of Nubul and Zahraa is not only one of two towns that used to live in harmony with their neighbours until a bloody and sectarian conflict ripped them apart. They have also become another example of Hezbollah’s growing power and influence in the Syrian civil war.

Over the recent years, the Lebanese Shiite movement have transformed from a political party and anti-Israel guerilla army to a powerful regional actor that has expanded its fields of operations from its base in Lebanon to the battlefields in Syria, Iraq and Yemen.

Surrounded by olive groves, fields and war-ravaged villages, I arrive in the Assad-loyal villages of Nubul and Zahraa north of Aleppo.

On the third of February last year, a coordinated two-day operation between the Russian Air Force, the Syrian Army, Hezbollah and the Iraqi al-Nujaba militia led to the breaking of the three-and-a-half-year siege of the two villages, to the relief of its inhabitants.

“There was a lack of food, medicine and electricity. We were completely cut off from the rest of the world. A lot of people died because we lacked the right medicine and facilities to treat the wounded,” says a 40-year old local artillery officer presenting himself as Abu Sulayman.

One thousand people lost their lives during the siege due to fighting, daily mortar and rocket impacts as well as the lack of food and medicine. Around half of the losses were civilians and a hundred of them were children. When the humanitarian crisis was at its worst, locals began cutting down the precious and hard-to-breed olive trees to use for cooking and keeping warm in the winter.

Despite these hardships, according to people in Nubul and Zahraa, the worst part of the years under siege was the enmity and hatred it had created between the residents and their neighbouring towns and villages.

“We used to go to school and play together with the children from the surrounding villages. We would marry each other across sectarian lines and there was no difference between us. But, unfortunately, some bad people in both camps managed to stir up people’s sectarian feelings,” says the 30-year-old physical education teacher Mohsin Sharbu who joined one of paramilitary groups to defend his town Nubul during the siege. Mohsin is one of around 3,000 local men who joined the ranks of pro-government militias when fighting broke out in the area in 2012. 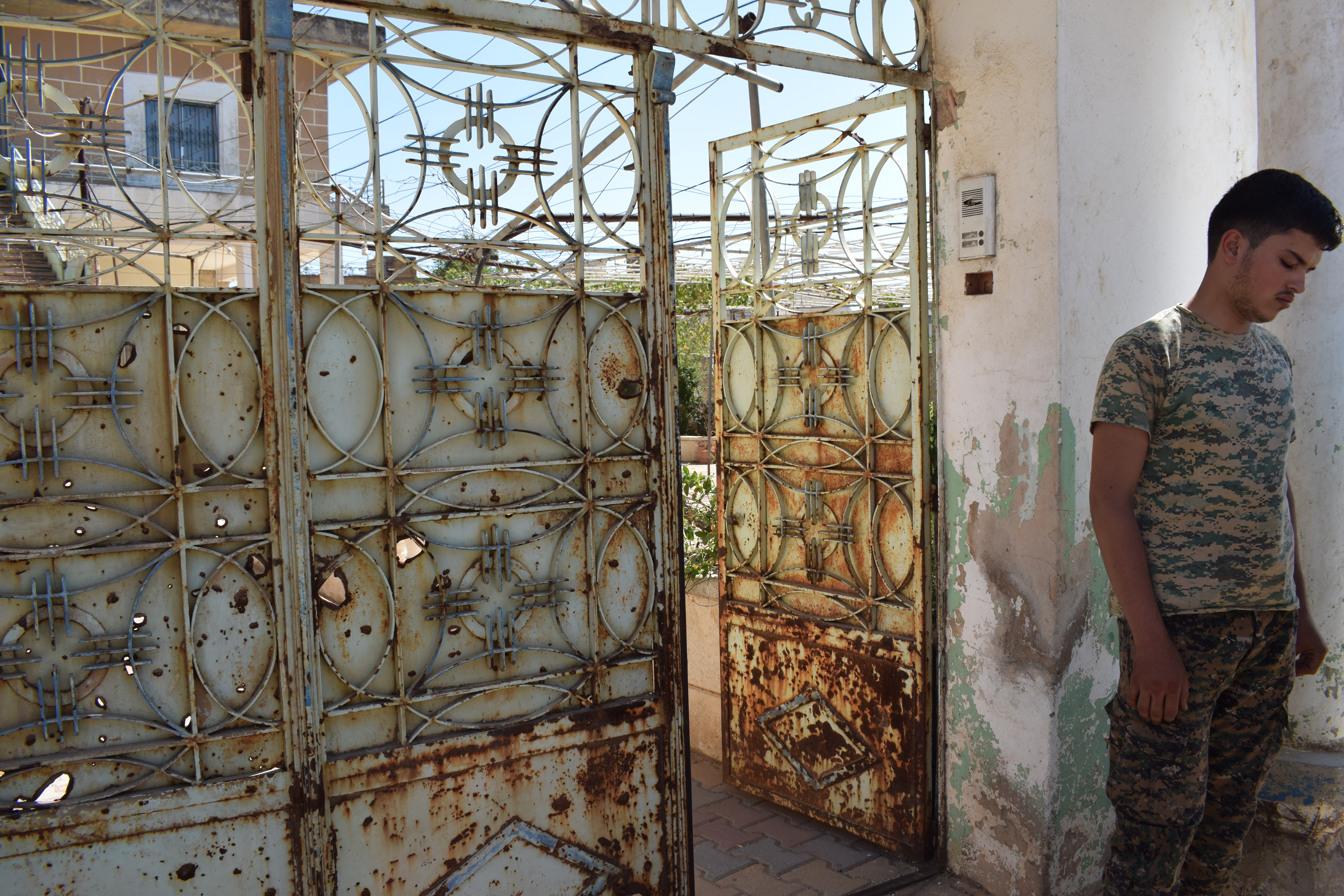 During the siege, a grad-rocket landed in the foreyard of this family’s home. A two-year-old boy was struck in the head by a fragment, but survived. Photo by Florian Elabdi

The sun is setting over Nubul and Zahraa, when the local artillery officer Abu Sulayman agrees to take us to the frontline. The rebel forces still control the areas south of the town and semi-allied Kurdish YPG-forces are in control of the north.

Despite being severely damaged by the war, it is obvious that this area used to be the high-end of town; two-story mansions with swimming pools resembling something out of a Pablo Escobar series on Netflix. Today however, the swimming pools are empty and the façades of the houses are covered with sandbags and bullet holes – the residents fled long ago. 800 meters from rebel positions, Abu Sulayman suddenly makes a stop.

“They blew up a suicide car bomb right here killing 17 of our men. The dirty dog who did it is still inside,” he explains, pointing at the car half-buried by the rubble.

While we are officially in a de-escalation zone, the sound of grasshoppers is regularly interrupted by the sound of heavy artillery rounds and gunshots in the horizon.

In May, Russia, Iran and Turkey concluded a deal establishing de-escalation zones in four areas of Syria. However, the reality on the ground seems to tell another story.

“The ceasefire, as they call it on television, just means that we are holding back a little. In reality, there is no ceasefire – the clashes are just running low at the moment and we are not conquering new territory,” explains a young soldier working his nightshift at the frontline.

All the men at the front are locals of Syrian origin. But they are not dressed in the colors of the Syrian army – instead, they are wearing Hezbollah batches and Shiite religious slogans.

Since the start of the conflict, the Syrian regime has outsourced a large part of its military operations from the army to local pro-government militias. It was the commander of the Iranian Revolutionary Guards, Qasem Sulaymani, who personally coordinated the training and organizing of local militias under the paramilitary army National Defence Force in 2012, which is today estimated to consist of approximately 90,000 soldiers.

“Hezbollah and the Syrian government has established local-based militias as a replacement for recruitment in the army, so fighters can defend their hometowns. That has relieved Hezbollah, the Syrian army and the rest of the pro-Assad coalition, who have instead been able to prioritize larger and more strategic battles,” explains Rasmus Jacobsen, founder of the Beirut-based security and consultant agency Atlas Assistance.

According to Jacobsen, Hezbollah has taken advantage of the opportunity to secure a more permanent stronghold in Syria once the conflict is over.

“Hezbollah has established a strong local presence and created loyal divisions in Shiite towns in Syria,” he explains.

“In these places, Hezbollah is not only training local militias, but they are taking over a lot of government functions and providing basic services in the absence of the state, in the same way that Hezbollah is replacing the Lebanese state in parts of Southern Lebanon.”

The Hezbollah movement officially intervened in the Syrian civil war in 2013, when the Assad regime was taking serious hits from rebels’ advancement on the battlefield. The primary interest of the Hezbollah leadership was to secure its land supply line to Iran and to keep a sufficiently anti-Israeli administration in power in Syria. Further, Hezbollah supporters felt threatened by the Sunni-militant rebels in Syria and feared that the unrest would spill into Lebanon. The Shiite-Islamist political and militant movement from Lebanon, whose raison d’être since its founding in the eighties’ Lebanese civil war has been resistance against Israel, now found itself on foreign ground in Syria fighting other Islamist militant groups. Yet Hezbollah has proven itself to be one of the most effective military actors in the Syrian chaos, which has led many observers to conclude that Hezbollah so far is the biggest winner of the conflict. 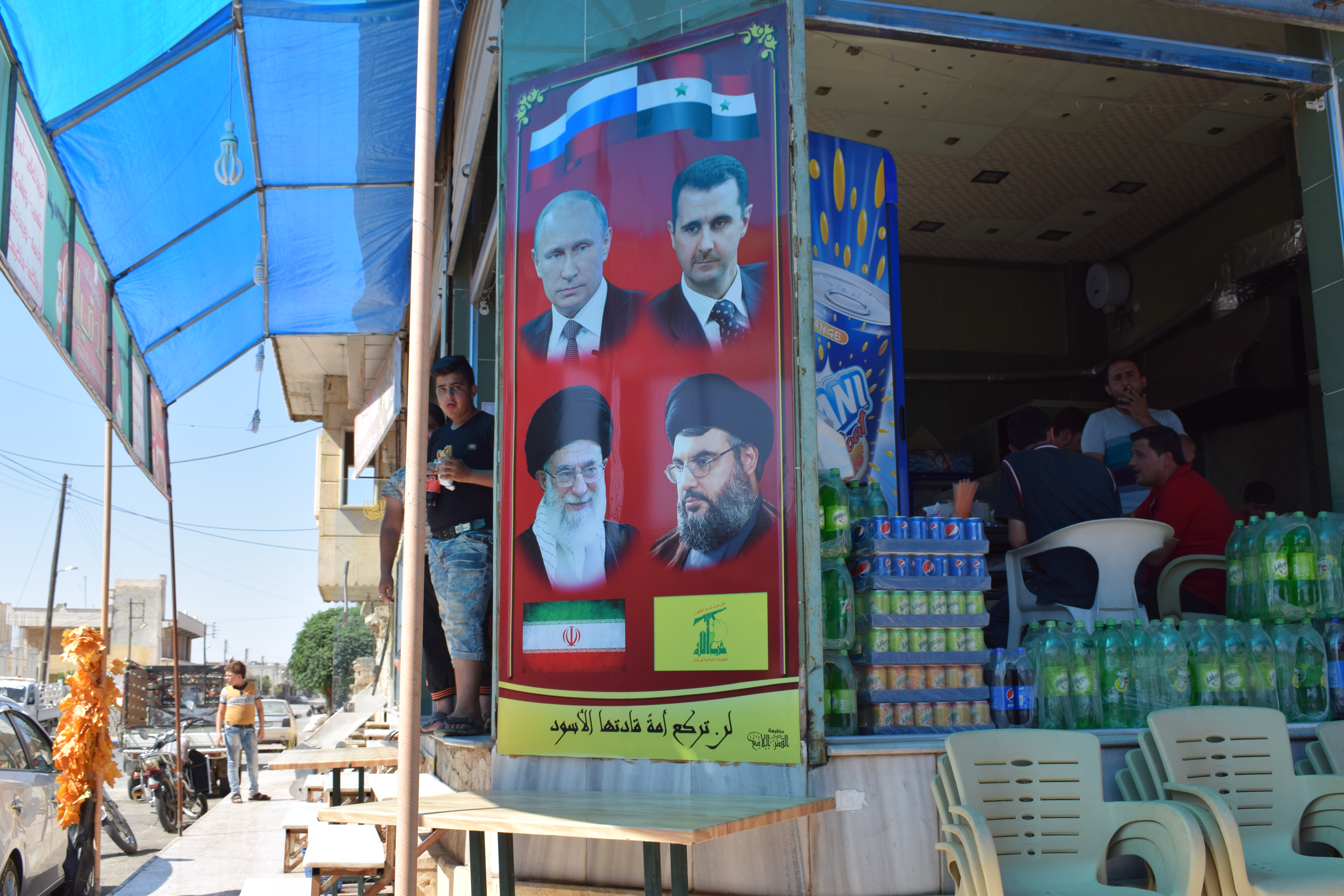 The main reason for this being, according to Rasmus Jacobsen, that the Lebanese movement is more disciplined than other armed groups in the Middle East.

However, Hezbollah’s »victory« hasn’t come without a cost. The movement is known for being secretive, but most estimates put the number of losses at minimum 1,500 fighters during its involvement in Syria and some of its most high-ranked commanders have been killed in Israeli airstrikes.

Additionally, Hezbollah’s popularity in the Arab world has suffered a severe backlash since 2006, where large parts of the Muslim world were celebrating the movements efforts in its war against Israel.

“It is very doubtful that Hezbollah can regain its lost reputation in the Arab world in the foreseeable future considering the opposition against the group in the wider Arab populations and media,” says Rasmus Jacobsen.

This perception is backed up by former senior analyst Sahar Atrache at Crisis Group, who earlier this year published a detailed report about Hezbollah’s involvement in Syria.

“Over many years, Hezbollah built its reputation as a resistance movement and an organization of principle. Syria has changed this reality. Paradoxically, Hezbollah’s growing force has rendered it more vulnerable as it has widened the array of its enemies,” she explains.

Even with Hezbollah’s deteriorating popularity, its involvement in Syria has made it into a stronger regional power.

“Hezbollah has transformed. It has become stronger militarily by expanding its arsenal and gaining battle expertise. Now, it has grown into a regional force,” says Sahar Atrache.

This expansionist strategy is not limited to Syria – in cooperation with its main ideological and financial sponsor, Iran, it has created the Kata’ib Hezbollah, or Hezbollah Brigades, in Iraq and it has regularly been accused of assisting and advising the Houthi rebels in their fight against the Saudi-led coalition in Yemen.

Last month, the secretary general of the party, Hassan Nasrallah, appeared on TV declaring the Lebanese army’s takeover of Islamic State’s last pocket of territory on Lebanese ground after the remaining IS fighters agreed to an evacuation deal. Although sparking controversy in and outside of Lebanon, the deal ultimately marked the end of Hezbollah’s four-year battle to control the mountainous Qalamoun border area. And only this week, according to the Lebanese al-Akhbar newspaper, Hezbollah’s leader declared victory in the Syrian war, describing the fighting to come as merely “scattered battles”.

The declaration was not only a show of confidence by the Lebanese movement; it may even mark the beginning of a new phase in its Syria campaign. In the time to come, Hezbollah will most likely start consolidating its gains on the ground while preparing for what analysts have described as a seemingly inevitable future war with Israel.

As the sun is setting over Nubul and Zahraa, we leave the frontline on the back of a pick-up truck driving through the olive-groves surrounding the two towns. When dusk falls, these fields turn into a danger zone for kidnappings and surprise attacks from rebels in the neighboring villages.

As most inhabitants here, the artillery officer Abu Sulayman is pleased that Iran and Hezbollah stepped in to help, when the Syrian army was pinned down on other fronts. But as most others, his main concern is that it may be impossible to reconcile with their neighbours once the war is over.

“I don’t see a future for us here in these towns. We are surrounded by enemies. We used to live together in peace, but too much blood has come between us now. I simply don’t see how things can turn back to normal someday. God is the only one who can solve this,” he says before jumping of the truck.

WATCH: Why does the leader of Iran deny the Holocaust?

Each year, as the world marks Holocaust Memorial Day, Iranians are faced with an awkward reality.