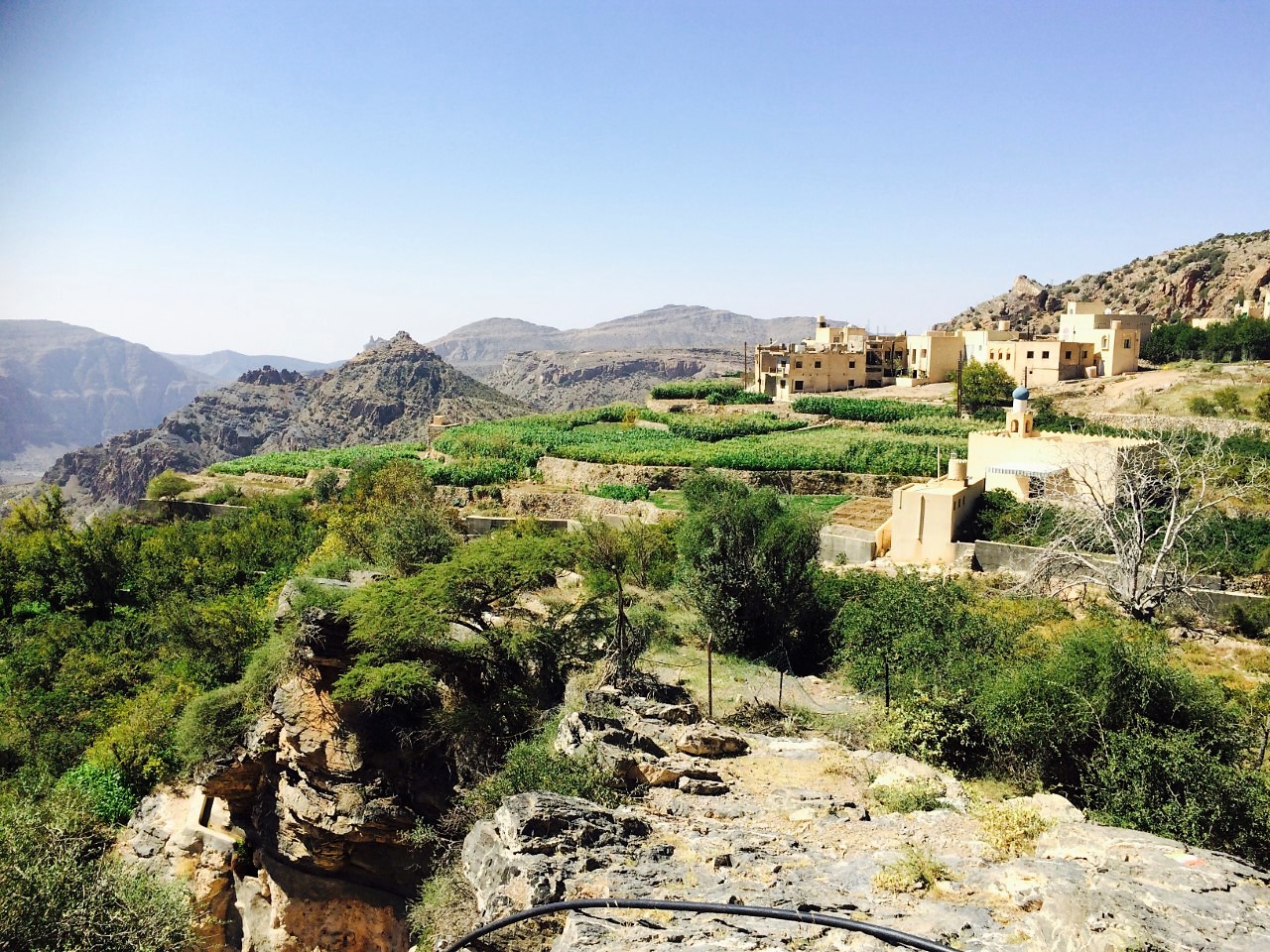 From rocks to agriculture – the ingenuity of the Omani Aflaj system

“In a country where water is scarce and running water still unavailable, the falaj is essential to most household tasks. For most of the day the head of the falaj is reserved for women” – excerpt from C. Eickelmans’s 1984 book ‘Women and Community in Oman’.

I can’t help but wonder what it must have been like in an inland Omani village, before tourists and resident expats arrived on weekend day trips, before all the comforts and amenities of modern society were available.

At a time where some seem to think we can simply take whatever we want from the planet, the traditional Omani aflaj irrigation system, still found in so many villages, is both fascinating and educational. The aflaj system was developed to extract and make use of a scarce resource in this dry land – water. To understand water supplies and traditional distribution of water, we need to step back in time.

Water Resources – the Importance of the Mountains

Oman’s Hajar mountain range, its peaks, bowls and wadis, is one of the country’s defining features – in terms of resources, geography/geology and cultural adaptions. An anthropologist by training, I thrive on learning about cultural adaptions. The geology though? Expert help was called for.

Referring to Peter Vine and his comprehensive Heritage of Oman, I learned that Oman’s mountainous regions “were created by upheavals in the earth’s crust associated with colliding plates,” specifically, a collision between the Arabian and the Eurasian plate, around 35 million years ago. Since then, climate and erosion have contributed to changes and today, Oman is—I am reliably told—a geological haven with highly visible rock structures and fossils, telling the story of how the land was formed.

The Formation of Wadis

The mountain range is full of wadis, or riverbeds – some are dry, but many feature pools of water and support lush green vegetation and villages.

Zayana al Aisri, a geoscientist with Petroleum Development Oman, helped me grasp the basics of how wadis are formed.

“The wadis of Oman are around 20 million years old,” Zayana shared. “They were formed from cracks or sutures in the mountains.”

“Oman is on an area experiencing a lot of earth movement,” she elaborated, “and as it moves, cracks are formed and widens. Sometimes, material falls into the cracks and rain comes and drags the material along, further widening the suture.”

“Some of the rocks we have in Oman,” Zayana added, “are carbonates. When rainwater falls on them, they form a carbonic acid, which continues to erode the valleys.”

I felt confused. Oman is a dry land. Annual rainfall varies with the different regions, but still, it is consistently low.

Geological time, as it turns out, is vast, and these processes happen over millions of years. According to Peter Vine, “there have been times when the climate must have been much wetter than today, and […] the impact of water erosion at these times were far more significant than […] at present.”

Water may have been plentiful in a distant geological past, but today, it is a scarce resource in Oman. Walking through a village at the mouth of a wadi, admiring the contrast between rugged dark mountain, brown dirt and lush green vegetable terraces and palm trees, I have often wondered where the irrigation water comes from.

“Under the wadis are aquifer rocks that hold the water,” Zayana explained. “If the aquifer is full, the water remains there, it sinks into the aquifer.”

This fresh water, according to Rashid Al Yahyai, can be extracted by “tapping the water table of the mountains and leading the water through man-made subterranean channels and siphons across the wadi beds to the planes where it is used for irrigation and other domestic purposes.”

It is this system of water extraction and distribution that is referred to as the aflaj (sing. falaj) system.

“The earliest known falaj [in Oman] dates to 500 AD,” states the Arab Regional Centre for World Heritage (ARCWH), “but archaeological evidence suggests similar systems were implemented as early as 2500 BC.” Around 3000 aflaj systems, ARCWH says, are still in use.

The Omani aflaj irrigation system is recognized by the UNESCO World Heritage Convention. “Ancient engineering technologies,” reads their Statement of Significance, “demonstrate long standing, sustainable use of water resources for the cultivation of palms and other produce in extremely arid desert lands. Such systems reflect the former total dependence of communities on this irrigation and a time-honoured, fair and effective management and sharing of water resources, underpinned by mutual dependence and communal values.”

According to the Oman Ministry of Tourism, there are three main types of falaj;

Dr. Rashid Al Yahyai, a specialist on arid-climate agriculture who runs the informative website Nizwa Net, argues that most of the aflaj we find in Oman are dawoodi or ghaili.

While the ghaili falaj makes use of the water found near the surface in wadis and often has open channels, the dawoodi falaj consists of long channels up to 50 meters underground, linked to a so-called motherwell. The dawoodi aflaj usually has water all year, while the ghaili aflaj depend more on seasonal rainfall. The ainy falaj originates from underground springs, sometimes thermal. While they are found in Oman, they make up less than 1% of the total number of aflaj.

The Village Falaj – Use of Scarce Resources and Sense of Community

In the past, the aflaj system provided fresh water for villages and supported agriculture.

“At the top of the falaj, where the falaj Qanat is open,” writes Al Yahyai, “the drinking water may be drawn […] and access is free for all.”

The falaj, if it was a sizeable one, would continue through the village, passing washing and bathing facilities, the mosque and forts, if applicable, before reaching the gardens. While water for domestic purpose was considered public property and free for all, there was an intricate system in place for managing water access for irrigation, using the sun and stars to keep time. Members of the community were either share owners in the village falaj, or they rented a water share. Income from shares, Al-Yahyai writes, was used to maintain the falaj.

Christine Eickelman describes how the falaj also functioned as a social meeting place for women, who would collect water, wash clothes and bathe themselves and their children. She indicates that traditionally, the end of the falaj was also the end of the village.

The Aflaj in the Future?

As UNESCO highlighted in their statement of the importance of the aflaj, the water distribution system was considered a communal responsibility. The people of the village contributed to it’s maintenance, because water access affected everyone.

With water tanks on every roof top, I doubt the aflaj system holds the same practical place in Oman today as it used to. Indeed, it could be argued that the aflaj system today is threatened. It is, however, still an important part of the country’s heritage and functioning aflaj systems are found in several villages.

I hope this will still be the case in years to come – the ideas that scarce resources should be protected and shared equally and sustainably, are worth preserving.

If you are in Oman, the National Museum has an informative section on aflaj.

It was we Americans that broke the deal, not Iran

"It was the United States that elected a president with no respect for his word or for the agreements his...