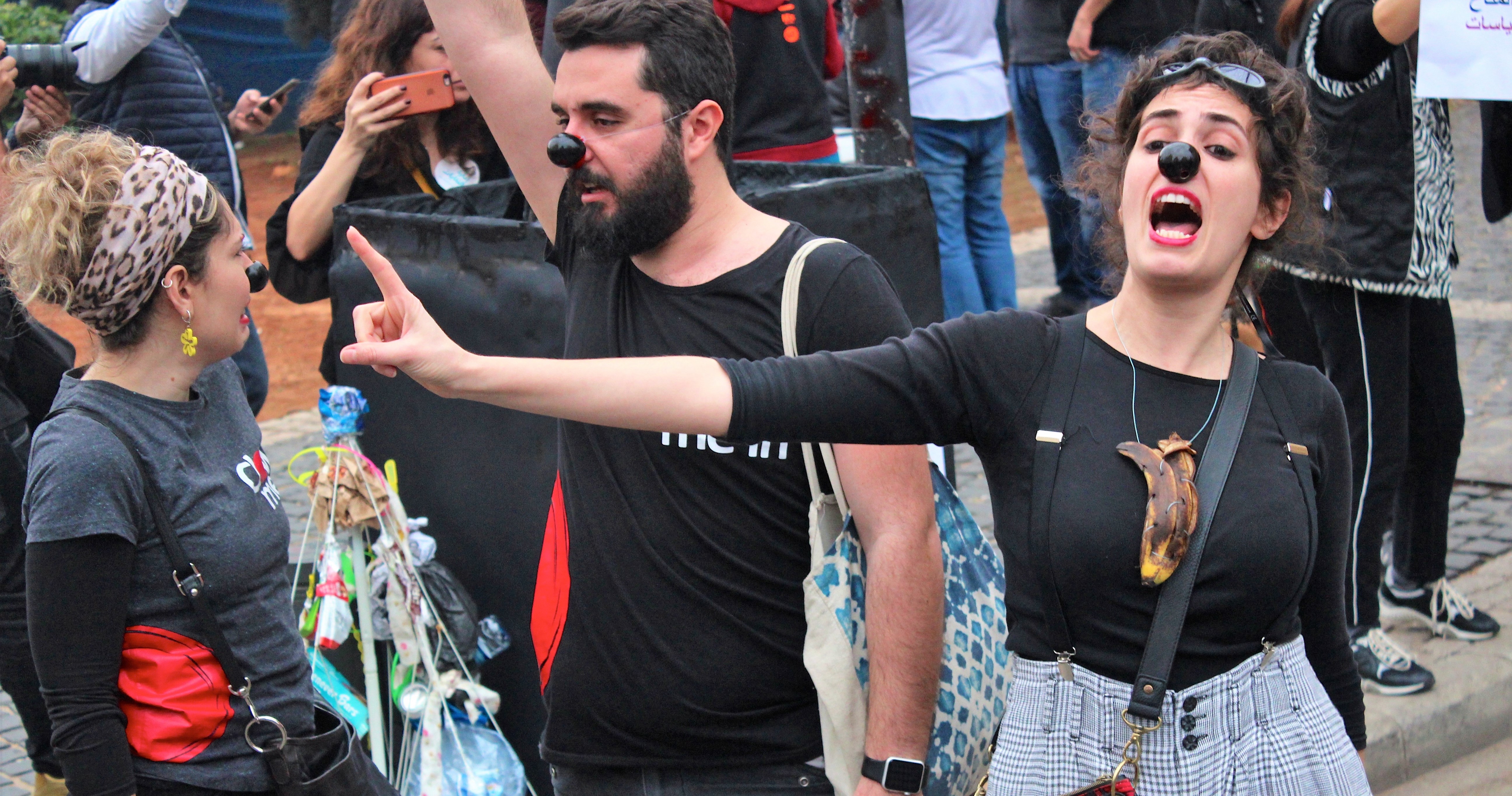 When the system stinks: Lebanese garbage protesters are calling for sustainable garbage management

In 2015, thousands of Lebanese took to the streets to protest against the country’s poor garbage management and the political system. Today, the garbage protesters have changed their method and the mass mobilisations are replaced with petitions and lobbying. The Turban Times were at the scene of the protest in Beirut that took place February 11.

A theatre group dressed in black clown costumes make a performance on the street outside the Prime Minister’s headquarters in Beirut. Carrying garbage bags and an incinerator of carton, they walk in and out between the small crowd, who are gathered today to call for sustainable garbage management in Lebanon. It is February 11th, a Sunday, and the surrounding streets are empty, except from about thirty policemen, who are watching the demonstration along the metal barriers few metres away.

The Waste Management Coalition; a collaboration between NGOs and organisations, which started a year ago with the objective of fighting Lebanon’s ongoing garbage crisis, are the organisers behind today’s protest. Under the slogan #Stopthem, they call to put an end to the continuous creation of landfills and waste incineration in the country. On a table in the corner, people can sign a petition to support their cause.

The ghost of a mass protest?

The frustration over Lebanon’s failing garbage system has lasted for more than two years now. In 2015, the waste collection was put on hold, due to of a political deadlock, and in response tens of thousands of Lebanese took the streets. Under the banner #youstink, the protests used the garbage as an occasion to express their discontent with the political system, which they claimed was just as rotten as the junk, piling up in their neighbourhoods.

Today’s quiet group of about 150 people and a bunch of journalists seems not to have much in common with these mass protests at first glimpse. There are no indignant calls to bring down the system and no cursing of sectarianism. It is all centred around a number of garbage policies.

Samar Khalil is among the organisers and works as an environmental specialist. She confirms the difference between 2015 and today:

“We are talking specifically about the environmental issues now. We do not approach it from a political perspective. All of the organisations in the Waste Management Coalition were previously working with environmental issues on their own, so we decided to come together and work more efficiently.”

Strikingly, however, some of the groups from 2015 still feature among the members of the Waste Management Coalition. One of them is Badna Nhaseb, who protested against corruption. Another is Beirut Madinati, a group which contested in the Beirut municipality elections in 2016. During the #youstink protests these groups represented different messages and agendas, which spanned beyond the topic of garbage.

Being asked how it was possible for the different political actors to come to agree on a common programme now, Samar answers: “We are not political parties. We are civil society organisations.”

She adds that several people in the coalition are running for the election and have other causes, but holds: “They do not come here representing their electoral groups in the coalition.”

According to Samar, they have come to realise that addressing the environmental question in a non-political way is more efficient:

“Whenever you start shooting on a political party in Lebanon, even if these politicians are supporting your cause, they will go against you.” For the same reason, the Waste Management Coalition does not address the elections per se.

William works at the regional office of Green Peace, which is based in Beirut and has come with a very concrete purpose: “I am here to protest against the government project that wants to bring incinerators to Beirut,” he says.

“The government has no sustainable solutions to waste management. They either burn the garbage or create new landfills.”

His friend Batool, who works in environmental chemistry, agrees: “I have been living in Germany and have seen the high standards they have there. We have none of that, and it’s just not acceptable”.

In 2015 it was a matter of anger, they both agree. Having the trash right in front of them made people shake. Elham, another friend, blends into the conversation: “Last time, because the protesters had so many agendas, the message got lost. Now, if we can focus on something, we can make sure that our message gets heard and people will be aware.”

The demonstrators are aware that this professionalised campaign could not expect to gather the same large numbers as in 2015. But this is not a disadvantage, says Elham.

“It is not the point of the message to gather the crowds. We are trying to reach out to the decision makers. The things we do are done on paper, so we care more about having petitions signed than having people coming.”

Yet, the secular agenda and the critique of the political system has not vanished; rather it is put aside for other foras. “If you ask people, they are leftist and secular,” says Ruba, a student at the American University of Beirut who signed up as a volunteer the day before the demonstration.

Ruba was present at the 2015 protests but wants to be more involved now, she tells. What motivates her is the same frustration. But this way of having a coalition and a single cause is stronger she says and then excuses herself from the interview. She has to take photos for the Waste Management Coalition’s Facebook page.

A woman calls a group of participants to gather for a group photo and instructs people on how to hold the banners. The clowns join the group and turn on the smoke-machine inside of their carton incinerator to simulate a poisonous smoke from burned garbage. A bunch of journalists and bystanders with cameras flock together in front of them to capture the right frame.

The far left in Israel – Personal stories of Israeli activists

What does it mean to be a part of the far left in Israel with the current government being the...