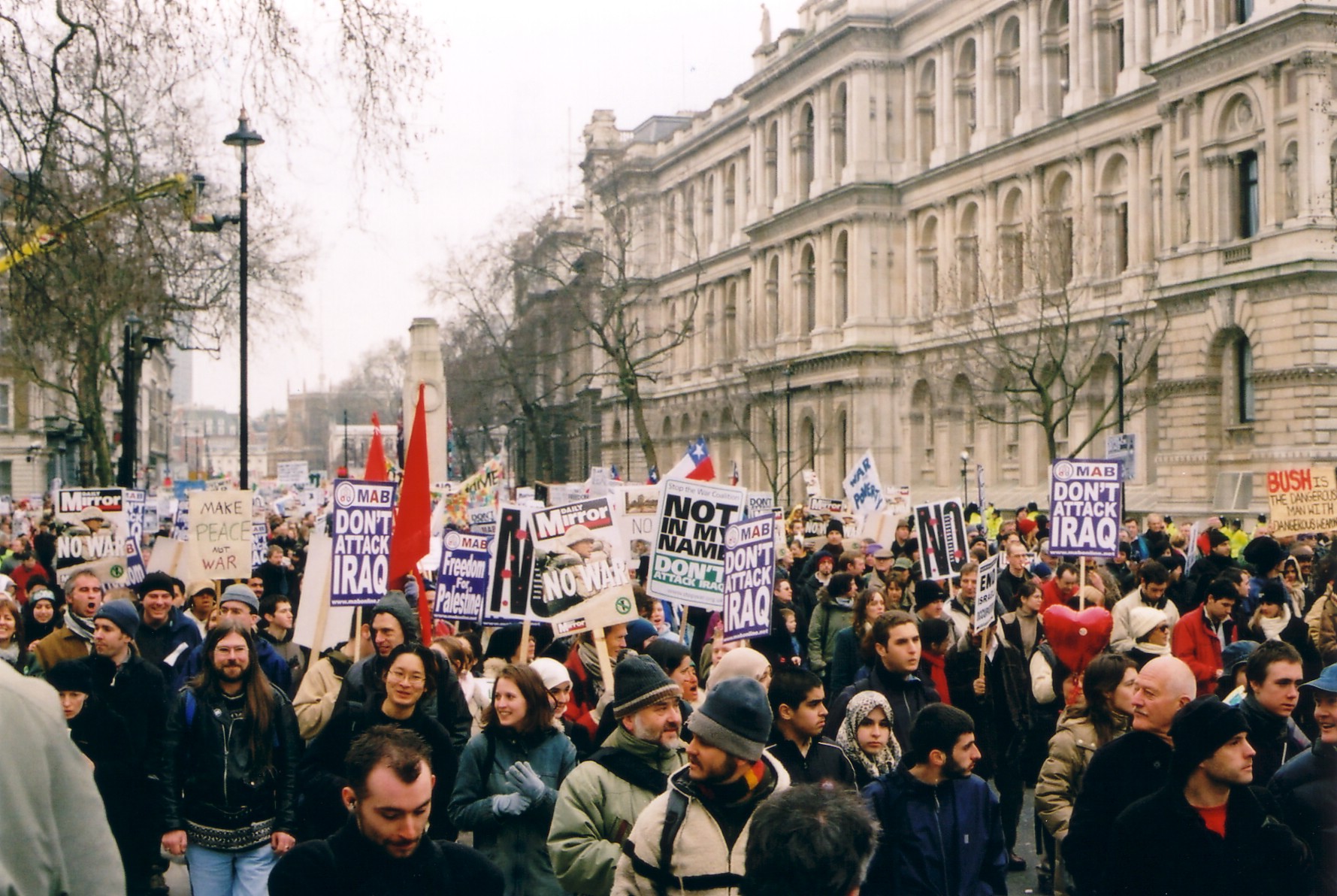 By Andy Wright from Sheffield, UK (Flickr) [CC BY 2.0], via Wikimedia Commons

Before the Iraq War, the people called for peace

While it did not stop the war ,  it sent the message to our princes that for once, citizens were not just apathetic in the face of their governments’ resort to the use of mass violence.

On this day, 15 years ago, one of the largest popular mass demonstrations ever recorded took place as an estimated 10 to 15 million people in 600 cities across most of the industrialized world took to the streets to protest the impending war in Iraq.

While it did not stop the war — and almost everyone knew that it could not and would not stop the war — it sent the message to our princes that for once, citizens were not just apathetic in the face of their governments’ resort to the use of mass violence. For once, populations showed that even if it wasn’t their bus services being altered, or their local school facing closure, or their hospital facing cuts, they cared. Even when the matter at hand was the lives of people far away, they cared. Millions of people cared so much, in fact, that they went to the streets to send that message. They knew that the war was not good for them, or for the people who were about to be liberated in fire, or for the future. The institutions we had set up to prevent wars were not failing: The UN Security Council did not approve the war. The head of the UN body charged with making sure Iraq had no weapons of mass destruction, Hans Blix, made it abundantly clear that he had found none, and that he needed more time to make sure if there were any. So they worked, in a way: While they could not stop the hegemon from making its will come true, they could expose the pre-war lies for what they were. This time people were not fooled into supporting a war that would make them culpable in the destruction of so many innocents. Anyone who has been even the slightest involved in politics would know how much it takes to make anyone enough to even blink.

If there was no popular power to stop the war — which has since taken hundreds of thousands of lives and trillions of dollars and has left us ISIS and whatever successors they will surely have — there was enough power to leave the warmongers exposed. Nobody was in doubt that the war was Bush’s war, Wolfovitz’s war, Cheney’s war — and that of the miserable lapdogs that cabal found among the prime ministers and presidents in Europe and elsewhere.

Personally, the war protests were also the first political events in which I remember to have had the sense of some agency. Small as any individual participation was, it was also, without comparison, the concerted action I am most happy about ever having taken part in.

We still live in a Machiavellian world. This is part of the inheritance from the princely states. At home, we are governed by municipal caseworkers; abroad, we are led by condottieri on the prowl. Looking for the next place to loot, they nervously watch their backs lest their palace is it. So war and peace, much as foreign affairs in general, remain at the hands of sovereigns, and populations rarely care enough about them to topple their governments over this most self-inflicted scourge. By a semi-recent count, the United States was involved in 134 wars, big and small, across three continents. Britain and France are involved in dozens, at least. Even small European states are bombing countries many of their citizens have never heard of. And governments treat wars as ‘delicate matters’; they know drone-striking shepherds in Chad or weddings in the hills of Afghanistan is not a vote-winner. And more; the raison d’état still trumps our most Athenian ideals. As citizens, we continue to choose it that way. Our princes want us to be careless and caring is hard to begin with.

There are potholes to be fixed, after all. Tax rates to be cut or hiked or never touched. Gardens to be tended to. As it should be: There are children to sing to, kisses to give and gardens to tend to. Politics get in the way. But the Iraq war has cost us all so much; so much sweat spilled has been wasted on bullets and rockets and tanks. So many young men have come home in coffins or on crutches or with their soldiers’ hearts bursting, many only longing to go back. We have spilled so much blood and cracked so many skulls. We have left a region in which terrorists could make entire societies appear.

We will only avoid this if we somehow manage to observe that blind spot in state democracy, in our current mode of organizing authority, allowing us to see that within our borders we might be divided, but we have become masters; beyond them, we acts as one, but we remain subjects.

The views expressed in this opinion are the writer’s only and do not necessarily represent those of The Turban Times.

This entry by Ask Foldspang Neve originally appeared on Medium. A version of the article is published by The Turban Times with permission.

When the system stinks: Lebanese garbage protesters are calling for sustainable garbage management

“We are not political parties. We are civil society organisations.”