Debunking the IDF’s narrative on Gaza

How the IDF tries to explain away the more than 40 Palestinians it has killed so far.

Justifying the killing of civilians is an area that the Israeli Defense Forces (IDF) has had plenty of practice in. Those familiar with Israel’s history of massacres, each of which the state has managed to explain away, are well aware of the IDF’s trend of actively targeting civilians. Somehow, though, Israel’s explanatory tropes have been successful at dominating the narrative and successfully subverting the conversation away from the occupation, convincing the world that it is Israel that is the victim of anti-Semitic existential aggression. This tactic is one that is still in use today and has seen deployment against the global, peaceful Boycott, Divestment and Sanctions Movement (BDS).

Recently, cracks through this hegemonic narrative have started to appear and an increasing amount of high-profile politicians are starting to see through the propaganda. As such, there has been a growing voice of opposition against Israel’s oppressive and illegal tactics which now include Bernie Sanders in the US and Jeremy Corbyn in the UK – both countries that regard Israel as a close, if not “the closest ally in the Middle East”.

This is not to say that the tide has turned. The recent killings in Gaza and their coverage in the media have, if anything, proved that the Israeli narrative remains the dominant one.

Headlines presented the non-violent protests taking place within Gaza and the shooting of their participants as “clashes” or “confrontations”, other headlines presented cynicism over the death count being reported by Palestinian authorities with headlines starting with “Palestinians claim…”, and the AP tweets that Israeli troops are “firing back” at billowing smoke heading their way from burning tires.

None of this is new. The media has always been quick to pick up on the trope of Palestinian protesters as those doing the terrorizing – a narrative aimed at pushing a false equivalency justifying a military response while ignoring the context of the occupation.

Jerusalem & the US media narrative

The narrative of the Gaza protests — where, so far, more than 40 civilians have been killed by the IDF firing at them from across the border — are no exception. Especially when looked at from the ‘official’ position of the IDF — conveniently presented as “ Everything you need to know about the riots in Gaza today”.

Everything you need to know about the riots in Gaza today, explained by Maj. Keren Hajioff

Here, the IDF’s argument is built on two pillars: 1) that Hamas, the political group elected to run Gaza is responsible for these protests, and 2) that protesters posed a threat to Israeli security and sovereignty.

The first argument is an important one. It allows the IDF to justify the use of military force against civilians by conflating the participants in the protest to militants within Hamas. This view is promoted by Israel’s Defense Minister who claims that no one in the Gaza Strip is innocent. As such, there are no innocent victims – those shot by the IDF are enemy combatants.

This argument is made more palatable by the fact that Israel and the international community regard Hamas as a terrorist organization. But Hamas also won a majority in the 2006 Palestinian elections which were overseen by international monitors, making them a legitimate political force.

This is not to exonerate Hamas from past activities which they seem to be distancing themselves from (Hamas has dropped its call for the destruction of Israel from its manifesto during the run-up to the 2006 elections). But it’s interesting to see the Israeli government use the exact rhetoric used by the very ‘terrorist organizations’ it condemns to justify attacks on ‘soft targets’. But then again, Israel is no foreigner to the concept of collective punishment as the Gaza Strip continues to be under blockade.

The extent to which this rhetoric has been rationalized in Israel has led to discussions on whether or not it is ethical to use actual Weapons of Mass Destruction on civilian populations in Lebanon, should another conflict arise.

Even if one were to take the IDF narrative and concede that Hamas has organized these rallies, and has, in a feat of political ingenuity, managed to mobilize 30,000 people to act exactly the way they wanted them to, it would only suggest that Hamas is moving away from its old rulebook of violent resistance and adopting peaceful means of opposition.

The second argument relies on the usual trope of a threat against Israeli sovereignty. Here one is posed to ask, what about Palestinian sovereignty? 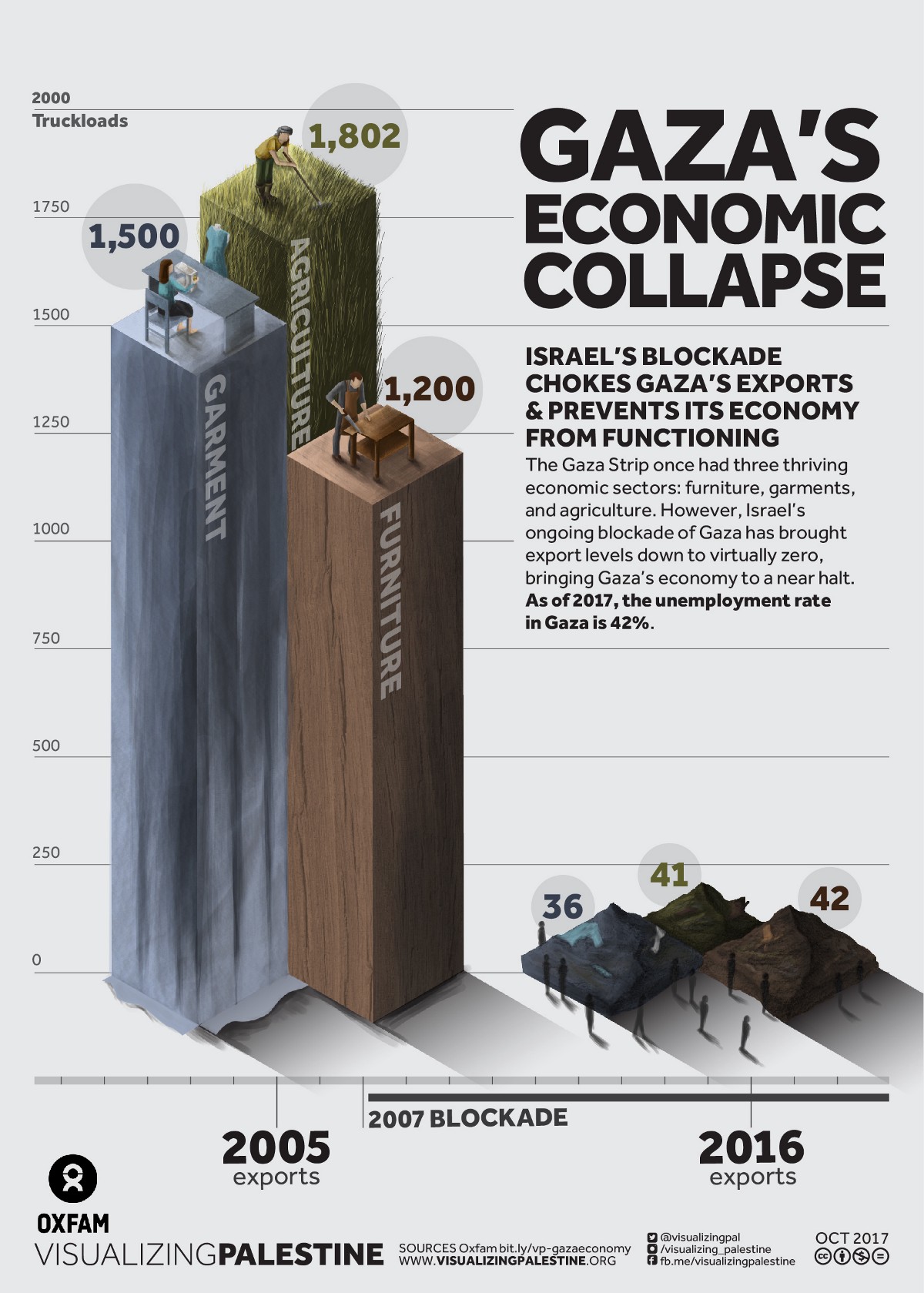 Not only does Israel not recognize the sovereignty of an elected party to govern (Israel has not allowed the Palestinian parliament to meet since Hamas won the elections in 2006 and has arrested dozens of Palestinian MPs), but it has also imposed a deadly blockade on the Gaza Strip and controls all of Gaza’s land borders, air space, and waterways. Israel has used the cover of the blockade to continuously harass Gazans across the years, shooting at and killing fishermen and farmers. Presumably, they too posed a threat to Israeli sovereignty.

Needless to say, the blockade has decimated Gaza’s economy, leaving citizens with limited access to drinking water and electricity and no infrastructure as building materials continue to be turned back. This has meant that Gazans have been unable to reconstruct after any of Israel’s wars on the small territory. To counter this, Gazans have turned to building what Israel deems as ‘illegal tunnels’ under their border with Egypt to smuggle in necessary supplies ranging from concrete, food, and medicine.

All of this has converted the strip into what has been called the largest open-air prison. Knowing all this, it’s strange to hear the IDF go on about Hamas “controlling Gaza with an iron fist”, for if anyone is controlling Gaza, it’s Israel and not Hamas.

Even if we looked at Israel’s claim that these protests are a threat to Israeli sovereignty, an even more daunting picture emerges. These protests are being held within Palestinian lands to demand the right of return – that is the right of Palestinian refugees within Gaza (refugees constitute around 75% of the population of the Gaza Strip) to return to the lands from which they were expelled in 1948.

These actions then are equivalent to the US choosing to open fire on Mexican demonstrators for protesting the construction of the border wall on their side of the border. Something that would yield unanimous and unequivocal outrage. 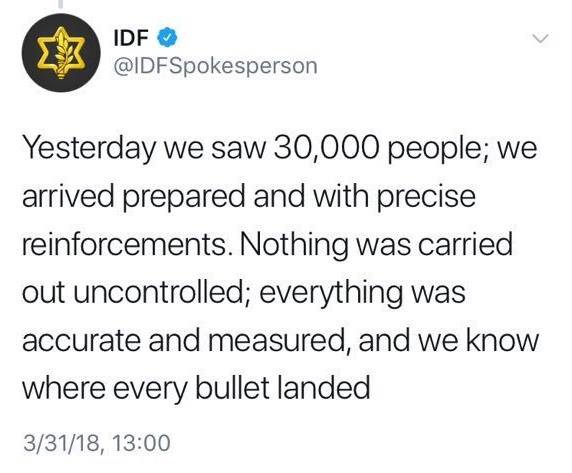 A tweet sent out by the IDF which it then deleted

The idea that Israel is targeting ‘known terrorists’ is also farcical. In the beginning of April, the IDF shot and killed a reporter wearing the internationally recognized blue ‘PRESS’ vest and video has been captured of Israeli snipers shooting a retreating protester in the back.

When it comes to the idea that Israel was keeping its citizens safe, it remains unclear what they were trying to keep them safe from. The IDF maintains a buffer zone around the Gaza Strip which it monitors with strangling efficiency. To suggest that any Israeli citizen, or even embattled IDF soldiers were under threat due to billowing smoke, rocks, or even Molotov cocktails is preposterous. If that threat was real, then how would Israelis be able to put up an ‘observation deck’ to watch the IDF shoot at Palestinians?

Even if we were to take the IDF’s narrative that protesters were ‘attempting to harm or destroy Israel’s security infrastructure’, is that a justification for an automatic death sentence? Illegal border crossings are dealt as civil matters with police interventions, not a sniper bullet. Here, even if we assume the position of the Israeli narrative again and label all Gazans as enemy combatants, then Israel becomes complicit in the summary executions of unarmed combatants – a violation of the Geneva convention.

Not a normal state

There is no other country in the world that the ‘international community’ would tolerate for conducting such actions. Many world leaders remain, as they have before, silent on this latest round of killings and have occupied themselves with the much more important task of expelling Russian diplomats.

The debate around the media coverage of the Gaza protest will, unfortunately, eclipse and obfuscate the reason for these protests and realities of life in the Gaza Strip beyond these latest human right violations (which are just that, the most recent in a much longer history).

These peaceful protests, though, are historic as they prove the development of healthy and capable civil movements within Palestine that for the first time provide no traction to the usual tropes put forth by Israel. It’s perhaps for this very reason that Israel has moved to act in such a violent and oppressive way (not that this is novel behavior from Israel). The legitimacy of peaceful protest is regarded as a sacred right by liberal governments across the world, making the Gaza protests near impossible to explain away or oppose.

These events might be the beginning of the disappearance of Israeli hegemony on the occupation’s narrative. A hegemony that has allowed it to be perceived as a normal state by the international community as it utilizes terrorist actions to prolong its illegal blockades and occupations. We must all use our voices to amplify the cracks in this narrative and expose it for the farce that it is while reaffirming Palestine’s legitimate right to resist.

This entry by Jade Saab originally appeared on Medium. A version of the article is published by The Turban Times with permission.

What’s going on in Yemen?