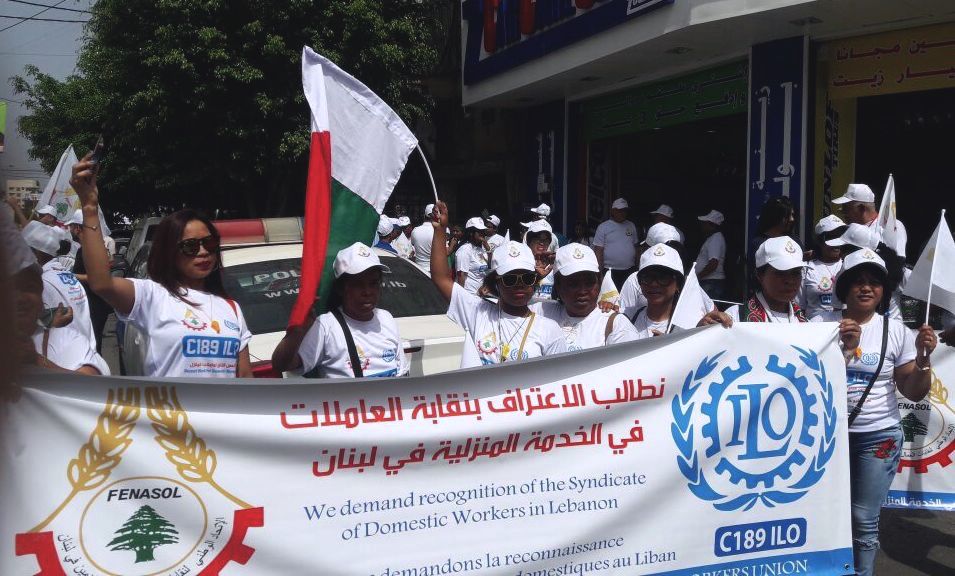 Labour Day in Lebanon: This is how domestic workers celebrated

Day off for Labour Day? Not for your maid.

The average window in Beirut’s sprawling metropolis overlooks at least 4 others. Staring for long enough, you can notice occasional candy-clad figures appear at the windows and balconies across the way. Their heads are often wrapped in matching scarves to their uniforms, reminiscent of those adorned by the house slaves of white, American households during the 18th and 19th century, who’s hair was covered in an attempt to desexualise and psychologically enslave. During a rare quiet moment, it is possible to hear the faint sounds of sweeping brushes and the flap of wet clothes being hung out to dry. These are the sounds of Lebanon’s domestic workers.

The – majority female – population fair from Ethiopia, Sri Lanka, the Philippines, Nepal, Bangladesh and elsewhere in the Global South. They have been coming to Lebanon seeking work since the early 1990’s, upon the culmination of the multifaceted Lebanese Civil War. Then, the fragmenting economy and eventual collapse of the local currency meant Lebanese women needed to go out to work to keep their families afloat. This scenario exasperated the need for domestic help at home and just as the Lebanese women were facing economic challenges, other conflicts and disasters around the world lead women from Addis Ababa to Manila to step out of the home to find work too.

In addition, decades of war and corruption at the highest levels have left Lebanon’s social care infrastructure lacking. Senior, disability and childcare facilities are inept and costly, as much as $350 per month. For half the price, Lebanese employers can ship in a chef, housekeeper, nanny, carer and language teacher.

They come under the Kafala system; an active (but questionably legal) sponsorship system used across the Gulf and Middle Eastern states, which effectively enslaves domestic workers to their employers, making them vulnerable to horrific abuses.

Foreign domestic workers entering Lebanon under Kafala are explicitly excluded from the Labour code protections (Article 7). No guaranteed payment for their work, no days off and being locked up in the employer’s homes has become standard practice.

At best, migrant maids receive hugely inadequate wages based on their racial profiles; Filipinos can expect an average monthly wage of around $400, Francophone Africans between $250-300, Nepalese $200-250, Ethiopians and Sri Lankans around $200, and Bangladeshis a mere $150 per month. At worst, prolific cases of horrendous physical, mental and sexual torture, evidenced in a 2008 Human Rights Watch report proclaiming that domestic workers in Lebanon are dying of unnatural causes at a rate of more than one per week – predominantly through suicide or botched escape attempts.

The Domestic Worker’s Handbook (pdf), available online under the auspices of the Lebanese Ministry of Labour, encourages employees to take care on balconies: ‘If you are asked to clean windows or balconies, be sure to take extra safety precautions not to lose your balance when you are leaning over or reaching outside the railings.’  The biting irony being that balconies are often the spaces where maids are forced to live; from where maids escape; are pushed or jump to their deaths.

One such case recently hit global headlines after activist group, This is Lebanon, picked up the story. Lensa Lelisa Tufa, a 20-year-old Ethiopian maid, became the poster girl for the Kafala system when she jumped from the second floor balcony of her fashion-designer employer’s apartment, breaking both her legs and injuring her face.

Since arriving in July 2017, she had suffered of physical abuse that she documented in covert footage shot from her hospital bed: “I was not allowed out of the house, not even to the store. They beat me everyday with an electric cable, wrapped my hair around their hands and dragged me around the room. They smashed my head into walls.”

Rather than protect Lensa, however, every single institution that she has come into contact with since escaping from the balcony has let her down: the hospital, who barred her aunt from entering; the General Security who concluded that “no abuse” had taken place following an interview with Lensa with her employers present; the Ethiopian embassy, who had the authority to extract Lensa from their grip; the Lebanese channel, Al Jadeed, who wheeled Lensa in her hospital bed onto national television for a thinly veiled, difficult to watch, PR stunt, alongside her employer’s daughter. In a quiet voice, continuously interrupted by Crystal Ajami’s ostentatious proclamations of innocence, she apologises to the Ajami family and professes to have made up the reports of abuse. That night she was allowed to return to the Ajami family home, the door locked behind her.

In the 7 days following the release of Lensa’s hospital video, This Is Lebanon’s Facebook page has gained over 3,500 new followers, most of them Ethiopians, and received over 40 new pleas for help from women trapped in homes throughout the country. Despite an ill-enforced ban in Ethiopia on citizens travelling to Lebanon for domestic work, approximately 600 women arrive to Beirut each day on the national carrier, according to This Is Lebanon. These women now account for 4% of the country’s population, yet their voices are utterly unheard. In a country with a population of 6 million – including roughly 1 million Syrian and 175,000 Palestinian (registered) refugees – with a youth unemployment rate of 37%, according to Labour Minister, Mohammad Kabbara, it is hard to imagine that there is much need for 500,000 domestic workers.

As Lebanon’s economy stabilized, the profile of employers of domestic workers – the Sirs’ and Madams’ as their maids know them – began to change. Today, the majority of reports of abuse come from status-hungry families, with little need and in many cases, little money, for a domestic worker. Yet, they employ a girl to live in their homes, walk their dogs, teach their children French or English, cook, clean. All so they can enjoy the perceived prestige of driving around town with their dog in the front seat and a young, uniformed woman, ready to serve, in the back.

Castro Abdullah, President of the National Federation of Workers and Employees Trade Unions in Lebanon (FENASOL), described this process to me as: “the poor exploiting the poor”.

Castro, whose office is adorned with images of his namesake, Fidel, says his socialist father instilled in him a distain for exploitation. Article 92 of the Lebanese labour code is interpreted to bar domestic workers from unionising and explicitly denies them the right to elect or be elected as representatives. Therefore, FENASOL, with support from the International Labor Organization (ILO) and the International Trade Union Federation (ITUC), effectively sponsors the Domestic Workers Union, which was founded by a group of Lebanese citizens and migrant domestic workers, including Filipino, Gemma Justo, on 25th January 2015, and supports nearly 700 members.

Yesterday, while the majority of the country raced to the beach, the union members and many other migrant community groups set out in caps and t-shirts, holding huge banners, on a march around the city. It was the 9th year in a row that the domestic workers have organised a demonstration on International Labour Day.

Hundreds of workers from many different countries joined the march. Chants of “We are not slaves, we want our rights!” were heard by onlookers and other women and girls peering from their balcony prisons, unable to join their peers. Lily, a 44-year-old Madagascan woman and informal leader of her community in Lebanon, was at the march. She arrived in Lebanon in 2009 but after 3 years, escaped her employers.

She explained that the domestic worker community are fighting for their rights to fair wages and access to social securities, like healthcare. “Not long ago, a girl [domestic worker] with no papers became very sick. She didn’t have money but she needed to go to the hospital for 1 week. We organised a fundraiser event and raised $1000 for her.” Lily is proud of her community but knows that it is not them that should be paying. Far from it.

Industry worth more than $44 million per year

The scale of the corruption is unprecedented. Just getting onto the maid trader’s books costs the girls around $200. The future employers must also pay around $1200 in hiring costs within Lebanon. Upon entering the country, the workers are ordered to pay a fee of $220 to the General Security to cover social welfare costs, such as healthcare, for which they do not benefit. This fee alone is pumping around $44 million each year into the Lebanese government.

Once a maid arrives, she can also be told she must work unpaid for 2 months in order to cover the rest of the fee owed to the office that has brought her here. Should the girl escape her employers, a world of bribery ensues.

Often, maids are forced to pay their former employers for the release of their passports; I’ve heard between $1000 – 4500 for this. However, even with a passport, under Kafala, domestic workers forfeit any right to legal status upon leaving abusive employers.

Many escaped women take vulnerable under-the-table jobs cleaning hotels or offices where they can evade detection more easily. However, at certain times of the year – when school fees are due, before the summer holidays, or towards the end of the month – the girls know to be more vigilant of police, who are looking to fill their pockets. Again, the poor exploiting the poor.

It is clear that these girls are to Lebanon, what oil is to the Gulf. The vast scale of the abuse leaves a dark stain on the self-proclaimed most liberal country in the Middle East. As the country gears up for a general election on May 6th, who is listening to the sounds of Lebanon’s domestic workers?

Debunking the IDF’s narrative on Gaza

How the IDF tries to explain away the more than 40 Palestinians it has killed so far.